The glory and grandeur of glass 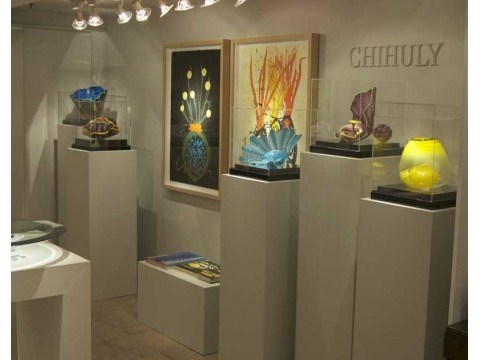 He's the artistic mastermind behind the breathtaking ceiling in the lobby of Las Vegas's Bellagio, an installation of 2,000 hand-blown glass flowers. He also created the 30-foot blown glass chandelier that hangs in the entrance of the Victoria and Albert Museum in London.

Now, Dale Chihuly, an internationally-renowned artist, has a presence here in Whistler, as Luminaura Gallery has started to present his work.

David and Krista Kilvert are the owners of Luminaura Gallery, which opened in the Fairmont Chateau Whistler almost three years ago.

With a combined background in fine arts, corporate branding and visual communications, the couple has a shared love of the arts. They started collecting small glass art pieces years ago. Back in 2001, they decided to challenge themselves on another level and opened their first art gallery in Banff, Alberta.

After almost five years of operating there, they decided to jump on an opportunity to take over a small space in the Fairmont Chateau Whistler, which they felt offered more of a resort atmosphere, with a loyal clientele of tourists that are more committed to the community.

"There's just a more dynamic feel to the flow-through of people - they're coming from all over," David Kilvert said.

Today, they're the only gallery in Whistler that focuses primarily on contemporary art glass.

"Both of us just have been exposed to a lot of the process and over the years, for many years, had visited studios and hot shops and watched glass being blown and collected a little bit of glass."

While Murano, Italy, is the traditional birthplace of art glass, much of the glasswork that was produced there was functional - items like lamps and vases. But today, the Pacific Northwest has become a focal point of contemporary art glass scene.

"People very much identify Murano as the centre of the glass world in the universe, but most of the glass in Italy... is production glass, and this is what intrigued us with Dale Chihuly, in particular."

You see, Chihuly was a prominent figure in the American art glass or studio movement of the '70s when he began experimenting with the medium in the hope of expanding people's concept of glass and ultimately transforming it from a craft to a fine art form.

"Quite honestly... he and a handful of the best Italian artists, they have done more to change the perception within not only the public, but within the art world."

Anyone who has watched a piece of glass art come together will agree that it's a fascinating, fluid process, one that seems to enthrall people of all ages and artistic backgrounds. And the end result is equally captivating.

"You have an art form that, for the most part, very often light becomes a critical element, whether it's simply daylight shining through the glass, or light being projected onto the glass, it's got this whole other light - the palette changes with the spectrum of the day."

The Kilverts first heard mention of Chihuly when he was in the early stages of his career in the 1970s.

"We heard a rumour that this person was doing things that had not been done before. He was challenging the whole glass world with some of these pieces. It wasn't until, really, the '90s, when some of his huge installations started to take off. But he was building a reputation."

Chihuly's name kept popping up over the next few years, and by the '90s, it became quite clear that he had had a cataclysmic effect on the glass art scene, especially once the iconic ceiling at the Bellagio was unveiled.

A car accident made it difficult for Chihuly to create his labour-intensive pieces, which require a lot of hands-on work and strength. Rather than give up on his art form, Chihuly chose to step back and form a creative vision, then direct teams to make that vision a reality - a completely unique approach at the time.

"He really refined the whole teamwork aspect of glass blowing, taking the artwork from a single, solitary studio into a team effort," Kilvert explained.

Chihuly also founded the Pilchuck Glass School in Washington, which has become something of a mecca for glass artists from around the world.

Today, his work is actually displayed at more than 200 museums throughout the world. He has even held a one-man exhibition in the Louvre. Which makes it all the more remarkable that he has selected Whistler as just one of three galleries in Canada to represent his work.

"For us, it was a real honour for them to choose us."

After almost two years of dialogue with Chihuly and his team, the Kilverts have selected seven pieces of glasswork from his studio editions series, which are valued from $4,000 to $8,000 each. These pieces are, of course, on a much smaller scale than his original pieces or his infamous installation. They are also carrying a selection of his original, limited edition lithographs and woodcuts, which are valued from $1,800 to $2,400 each.

Chihuly's people did plenty of research on the Whistler community, looking at the market and demographics, before committing to Luminaura. In the end, however, the Olympics may have been the deciding factor, as Chihuly completed some major installations during the Salt Lake City Olympics.

"Awareness" may be a slight understatement - after all, his exhibition in Jerusalem attracted more than one million people. And since quietly unveiling his pieces just three weeks ago, Luminaura has already sold one to a client from Portugal and a few prints to clients from Florida and the UK.