The mother of dance recitals

Vibe Dance Studio’s Fairy Rhymes & Nursery Tales on set for a four-show run this weekend
Jun 17, 2011 6:48 AM By: Stephen Smysnuik 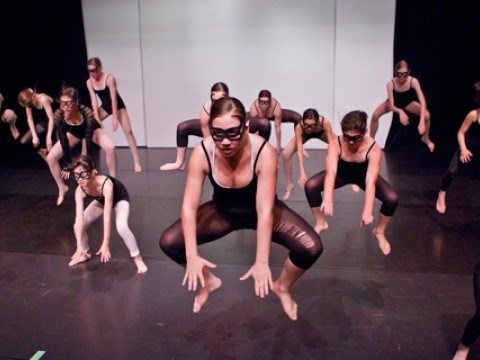 There's something infinitely entertaining about children in costume. Add to that a Broadway-worthy theatrical concept, some professional choreography and you have the hottest ticket in Whistler.

Fairy Rhymes and Nursery Tales , the Vibe Dance Centre's year-end dance show begins its three-day run Friday at Millennium Place. This will be a full-blown production, with an original script and choreography, original music and handmade costumes. All dance studios have year-end recitals but rarely like this.

At the helm is Heather Thom, who opened Vibe with her husband Jeremy last September. For five years, Heather - a professional dancer and choreographer since she was 15 - has conceived, written and produced year-end recitals for the now-closed Soul Funktion Dance Studio and this is the first one through Vibe. These were smartly executed productions that sold out every year and often left parents in tears.

Fairy Rhymes and Nursery Tales is part spoof of and part sequel to all the classic stories we were told as kids. It will feature toddlers to adults, as well as appearances by the Vibe Tribe Dance Team, best known for the public "flash mob" dances during the World Ski and Snowboard festival earlier this year.

As in previous years, Thom has kept the show's plot under wraps. The dancers learn their routines while left completely in the dark about the storyline until the first dress rehearsal.

"The surprise is what makes it special," Thom says.

Rather than do any old dance recital - a "boring" experience for anyone who has sat through one, Thom says - she incorporates elements of musical theatre, various forms of dance into original storylines because a recital is more than just a show of the dancers' skills. It's a celebration of dance as art, both for those creating and those watching.

But with that comes months of intense practicing and refining of the dance routines. For about two months before the show, the senior dancers practiced long hours, every day. Thom is there, watching with all the intensity of a tiger hunting prey. Every imperfection is pounced on, discarded, ground into non-existence so that by show time, the entire Vibe Dance Centre group is a fleet of professionals.

But Black Swan this is not. These girls and boys embrace each practice with the same dedication and good cheer they would bring to a bike ride through the park.

"The kids get really tired but they're like professionals. They keep coming back, they never complain. They're amazing," McGraw says.

Thom says, "This year, the dancers in this town have come a long way. They've worked really hard and I've seen a lot of improvements."

The Vibe Dance Centre and offers a variety of dance lessons as well as guitar and drum lessons by Jeremy. He says their attention was divided between opening the studio and running the show so that planning for the show happened a lot later than in previous years.

Thom says she has considered travelling with her shows. The concepts are original enough, the dance routines thrilling enough, but the commitment from all the parents would be too much and too difficult to coordinate. As such, this will be a world-class event for Whistler only - the kind of thing people allude to when saying the arts are alive and well. So get some tickets through www.artswhistler.com. They're a hot item and selling fast.