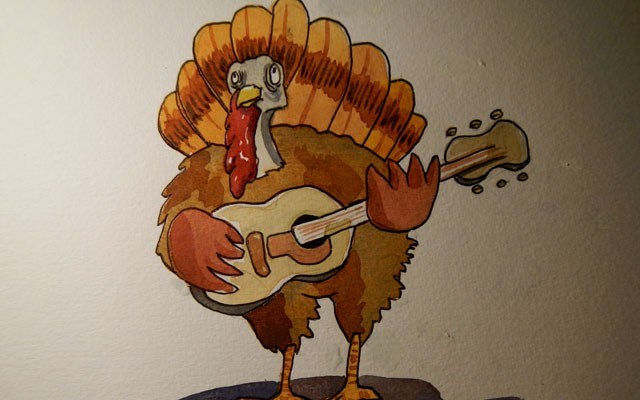 pass the Turkey Artist Christina Nick painted a watercolour for the All Original Orphans Thanksgiving. The musicial dinner will take place on Oct. 12.

Despite what its name suggests, you don't have be all alone to gobble down turkey and enjoy some tunes at the All Original Orphans' Thanksgiving on Oct. 12.

The event, at The Point Artist-Run Centre, will include an all-star lineup of local musicians, including Laura Nedelak (who recently returned from the Zhangjiajie International Country Music Festival), Susanne Wilson, Michael Faiella, Rajan Das, Stephen Vogler, Susan Holden and Sean Rose, along with a turkey dinner. The hook is they'll all be playing original songs, some on their own and others as a massive group.

"We said, 'Let's do all original music for a change-up from what you hear around town," says Stephen Vogler, one of the event organizers. "There's a lot of good songwriters around, so it should be a fun, cozy night."

Throughout the summer The Point hosted dinners, lectures and music performances as part of its Works-in-Progress series and organizers wanted to hold at least one more event before the Alta Lake building closes for the winter. "The dinner shows were really popular," Vogler says. "I think that's a really good direction to keep going with, a casual drop-in, open house thing... The idea is if you don't have family around it's a chance to have a good turkey dinner and get together with a bunch of people."

The other aim is to foster the creativity of local musicians by giving them a place to play their original music in Whistler where cover gigs reign supreme. "The Point is all about encouraging real creativity, original creation, artistic creation from our community," Vogler says. "I think in terms of music, the deepest creativity is when people are writing their own music, so I like to try to promote that. In the bars, people throw in original songs, but it's always been more conducive to play cover tunes that everybody is familiar with."

But don't expect a whole evening of tame singer-songwriters. "It's not going to be quiet, folky guitar," Vogler adds. "It will be original music and total kick ass too. The idea is to get people up and dancing."

The plan is to start the evening with a massive dinner, move into some pared -down tunes then get everyone on stage to create a big band. "It will kind of grow in members on stage as the evening goes on," Vogler says. "We're going to try to mix it around... We'll have a little band that will be backing up different people and mix it around and create a bit of a jam towards the end. It will be loose and creative that way."

Tickets for the show with dinner cost $20 while show-only tickets are $10. The event begins at 7 p.m. Tickets are available at pointartists.com.