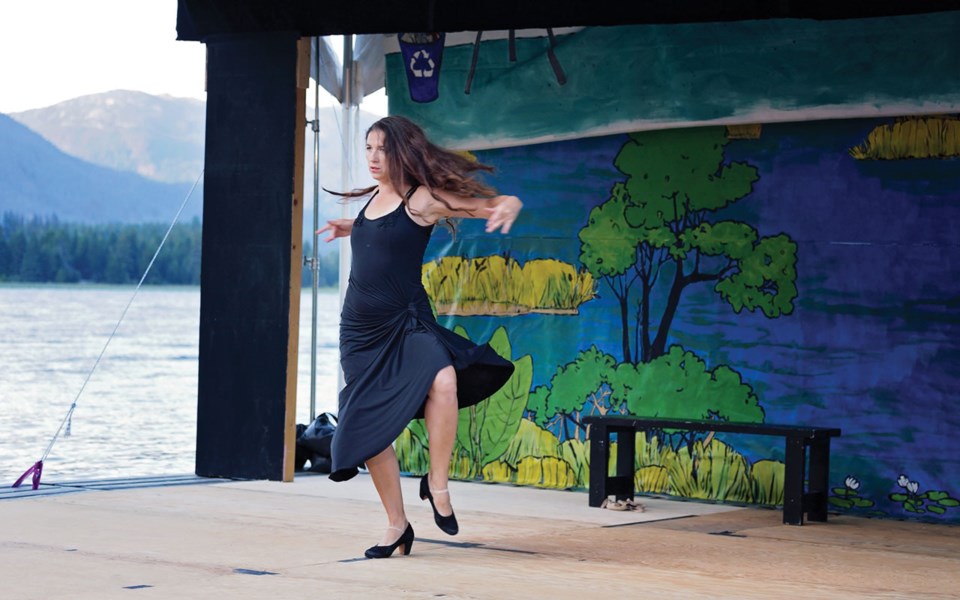 A dancer from Gruff Goat Dance performs onstage at the Flag Stop Theatre & Arts Festival at The Point Artist-Run Centre. Unable to host its traditional fundraisers to support the festival and its other endeavours, The Point has moved fundraising online for 2021. Photo submitted

The Point Artist-Run Centre has launched an online fundraiser to help support future programming after it had to cancel its annual fundraising events in 2020 and 2021 due to COVID-19.

Instead, supporters can log on to GoFundMe to check out an array of “rewards” they can get for donating.

“For the Love of Art—Get to The Point! is a GoFundMe campaign that will enable The Point to continue its arts programming, from children’s theatre and music camps, to the Flag Stop Theatre & Arts Festival, as well as other upcoming live and live-streamed events made possible through a forthcoming investment in digital equipment,” according to a release. “The best thing about this new twist on fundraising is that it also directly supports artists.”

Half the proceeds will go to the artist who created the reward and the other half will go to The Point.

For $20, you will receive a membership to The Point, while $50 will get you an art print by Andrea Mueller. A $100 donation will land you some Zoom acting classes with Ira Pettle. For $150, you will get a Vincent Massey ceramic pitcher and for $500, you can get a small, original painting from a local artist. Membership is also included with all donation rewards.

You can peruse and choose some of those at gofundme.com/f/the-point-artistruncentres-annual-fundraiser.

Go small for a fourth year

Artists must be from the Sea to Sky corridor (Bowen Island to Mount Currie) and drop off their pieces on or before Feb. 28.

If you’re in need of a tiny canvas, you can pick one up the Maury Young Arts Centre for $3 (or $5 for two) during opening hours.

The art can be in any medium, but jewelry isn’t accepted at this time.

The show itself will run at The Gallery from March 11 until May 1.

To see the full list of rules and how to submit, head to artswhistler.com/event/the-teeny-tiny-show-2021-call-for-artists.

Surprise! The Vancouver International Mountain Film Festival is moving online for its 24th annual event from Feb. 19 to 28. (OK, that probably comes as a surprise to no one.)

As part of its offerings, this year, there will be 17 different shows with more than 50 films, workshops, and panel discussions.

Films range in topic from climbing to skiing, mountain culture to the environment.

This year, a film-only pass is $75 for access to all the films and three live panels (it goes up to $85 on Feb. 19), and $95 for an all-access festival pass, which includes film access, the panel discussions, three interactive virtual workshops. (That goes up to $105 on Feb. 19.)

Tickets to individual feature films, meanwhile, are $7 or $15 for shows and workshops with prices increasing Feb. 19.

To see the full lineup, or get tickets, head to vimff.org.