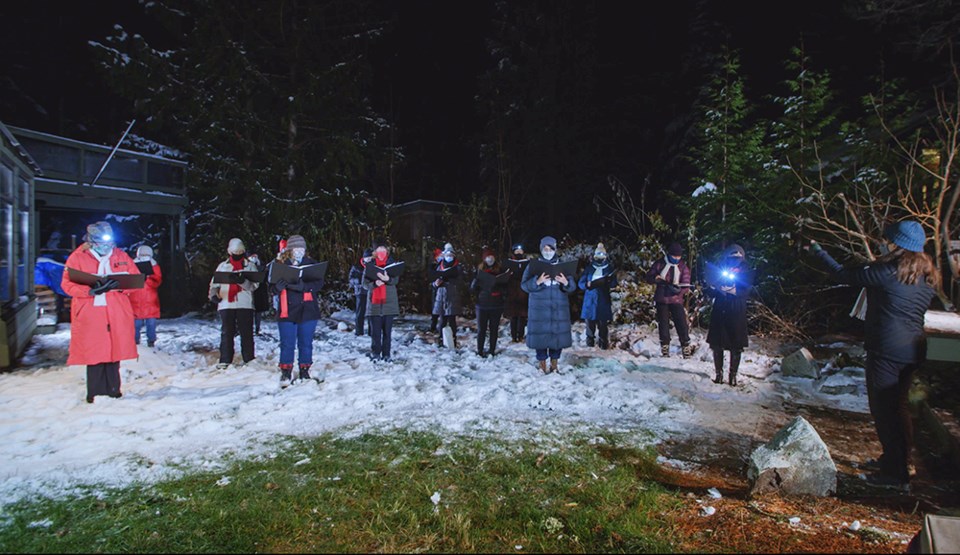 Alison Hunter and Jeanette Bruce were determined to make sure year number 37 of Whistler’s Christmas Eve Carol Service happened—pandemic and all.

“This is the longest-running Whistler tradition,” Hunter says. “How could we give it a miss?”

Arguably, this year more than ever people need the comfort of such a long-standing holiday tradition. So, way back in July, under the semblance of normalcy compared to December’s lockdown standards, they set to work.

“Pretty early on we connected with Hailey Elise and Ollie Jones, because they did a video for Barbed Choir [Whistler’s rock ‘n’ roll choir], and they did quite a good job for us. Their bread and butter is more like action sports videography, so we figured they could definitely handle us,” Bruce, director of the Whistler Children’s Chorus, says with a laugh.

“We were able to record the readers at the library in front of the fireplace in the Fireplace Lounge,” Bruce says. “But we had them come in in small groups, so everything was very safe … We got that all done and dusted in October and that included Alison and I recording our intro and outro.”

But, of course, the other major element of the service—which, in a typical year, attracts 2,000 people—is the carols. During this topsy-turvy year where singing has been deemed dangerous, Hunter had to figure out how to organize a safe singing session.

“There was a choir in the Skagit south of the border that made everybody realize how dangerous singing was,” Hunter says. “None of us want to be that choir. So in the summer we had a bit of a test run where about six, seven choir members came to my backyard. I have a really big garden. We did a couple outdoor practices where everybody sang in masks.”

The B.C. Choral Federation had also put together a how-to manual for safely singing in person during COVID-19, which was helpful in navigating the next steps.

To that end, they approached the Fairmont Chateau Whistler about using one of their massive ballrooms for hybrid rehearsals in which some people were in person and others on Zoom.

“We were going to record the carols in the ballroom, but then the next phase of the pandemic came in,” Hunter says. “How many plans did we have? Probably up to Plan W. So we recorded some of the songs in my back garden, in the dark, in the snow. We lit up the yard and there were 18 choir members here, all socially distanced, all masked—we have learned you can sing in masks—so we recorded some of the songs that way.”

Bruce, who has been part of the Hunter family bubble, came over to their home to sing the rest around the piano with Hunter’s three daughters.

“I think it’s pretty great,” Bruce says. “I think the combination of the Fireplace Lounge with the speakers, the backyard with the singers and then around the piano with a small ensemble, I think it all works together. It’s kind of wintery, kind of cozy, it’s got a good feeling to it.”

“Then that will be available to watch any time after that,” says Bruce. “We’ll leave it up through the whole holiday season.”

The event is free, but if you wish to donate to help offset some of the costs (usually covered by in-person donations at the event), email whistlerchorus@gmail.com.