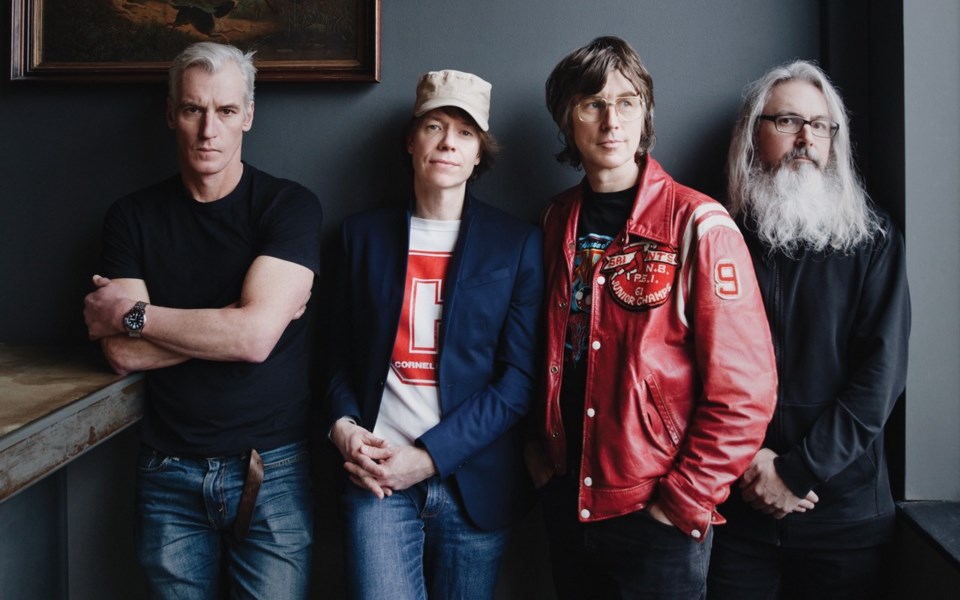 SLOAN AND STEADY Canadian rock royalty Sloan has maintained its original lineup for close to 30 years. Photo by Vanessa Heins

The authoritarian approach to making art has, rightly or not, been romanticized for years in the larger cultural zeitgeist. There’s even a fancy word coined during the golden age of French New Wave cinema—auteur—that gets attached to the kind of creative visionary who refuses to compromise for anyone or anything.

There are good reasons for this kind of cultural canonization: we want our artists to be rebels and vanguards, dogged in their pursuit of excellence. We hold up the maniacal, almost tyrannical work ethics of, say, Prince, who played every single note and sang every last vocal on his debut album, or, for instance, Stanley Kubrick, who along with being regarded as one of the greatest directors in film history also infamously belittled actors to the point of tears on set, because we, the consumer, are the main beneficiaries of their creative output. Their slavish devotion to their craft is ultimately our gain.

Less sexy, however, but not altogether less effective, is the equitable approach to art. Take Canadian rock royalty Sloan as an example: For close to 30 years, the Toronto band has maintained a fiercely democratic stance to both the art and business of rock n’ roll. Almost unheard of for a band with its longevity, Sloan has maintained its original lineup from Day 1 and splits songwriting and finances down the middle.

“It’s a little bit boring, but, honestly, what seems to have worked for us is sharing everything four ways, which is sort of a little bit of a throwback,” says guitarist Jay Ferguson. “I remember growing up reading interviews with REM, or even U2, where they split everything four ways, generally. I think if everyone’s in the same boat, it’ll keep your band together … We share the profits from the good times but we also share in the lulls when there are bad times.”

Now 12 albums deep, Sloan has remained committed to spreading the love. On its latest record, 2018’s aptly (if not unoriginally) titled 12, each member of the group got to write a trio of songs.

You can make the case that all that egalitarianism has led to an uneven feel on some of Sloan’s records—12 included—but it’s also key to the group’s industry-bucking durability.

“Every time we’ve gone in to make a record, we go into it with the idea that everyone is going to contribute,” Ferguson says. “Maybe in the end, someone might only have two or three songs or whatever, but we go into it with a democratic notion. I don’t think anybody’s ever going into it like, ‘I want seven songs on this album!’ Nobody really takes over like that or anything. It’s pretty healthy respect for everybody’s abilities.”

The other unavoidable factor in Sloan’s resilience is the fact that they have always strived to make timeless records—although Ferguson is loathe to use that term. Go back and listen to any of the band’s classic cuts, and unless you are already familiar with their catalogue, it would be difficult to pinpoint them to any one era. They just sound like Sloan, through and through.

“I’m as happy to play a brand new song as I am to play an old song,” Ferguson says. “Maybe here and there, there’s a bit of a lyrical, ‘Oh, I would’ve done that differently,’ but I don’t feel that embarrassed by anything that’s old. I think without saying ‘We’re timeless’—that sounds a bit obnoxious—a lot of our songs work today as well as they did in 1994.”

Sloan has also managed to strike a balance between its older output and more recent tracks by following a pattern in which they release a new record before following that up with a reissue of one of their beloved albums from the ‘90s or early ‘00s.

“We’ve been around for a long time and it’s hard to keep a fanbase stringing along—other than the diehards—with, like, ‘Hey, it’s our 12th album!” Ferguson says. “I found when we did the Twice Removed box set and the One Chord to Another box set, it really brought a fanbase out of the woodwork that maybe would have dropped off 10 or 15 years ago.”

So, as Ferguson enters his fifties, does he still feel cool?

“I mean, how do you define cool? I don’t feel like, um, who’s cool right now? The kids in The Lemon Twigs? They’re pretty cool and I don’t feel as cool as they are,” Ferguson muses. “But do I feel cooler than Mac DeMarco? Yes, I feel cooler than Mac DeMarco, to be quite honest. I can’t even look at that guy. He’s wearing, like, LL Bean jackets and little mini-baseball hats.

“Let’s say I feel relatively cool. If Chris said we’re a cool band over 45, then I’ll stand by that statement.”

Sloan plays a free show at Olympic Plaza on July 12 at 7:30 p.m. as part of the Whistler Presents Outdoor Concert Series.