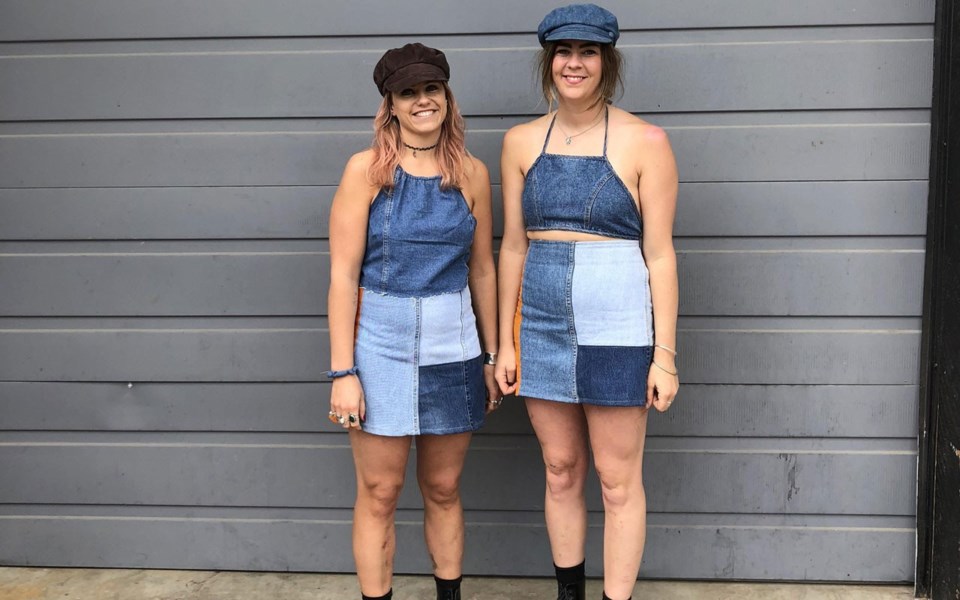 "She was like, 'we're (taking a break) on Sunday' and texted me and said, 'Let's go camping. Let's get out of Whistler,'" says Nikki Segovia, Rafferty's business partner. "Then today she goes, 'Actually, I decided I'm going to sew on Sunday and Monday."

It's hard to imagine working away a Whistler summer, but Rafferty and Segovia are on the cusp of celebrating the grand opening of their new storefront, called The Velvet Underground, in Function Junction.

"There's definitely times where I'm like, 'Dammit, I wish I could have a day off,'" Rafferty says. "Like any business, it has its ups and downs, but on a good day I can see the silver lining. I'm at the point in my life where it's like now-or-never to follow through on things I've wanted to do my whole life."

On a hot, Thursday afternoon, the front garage door of the shop is thrown open. Vintage clothes, arranged neatly, are jam-packed everywhere. Lush, green plants hang around the room while a not-yet-in-service espresso machine sits on top of a coffee bar.

Eventually, the space will also be filled with sewing machines that will get tucked away on nights the storefront/ workshop turns into a music venue.

The shop is exactly what Rafferty dreamed of when she started selling her handmade, upcycled hoodies under the brand name HMU a couple of years ago. Eventually, she moved her workspace and shop upstairs from the new location, but quickly outgrew it.

Rafferty and Segovia see themselves filling a gap in Whistler's current offerings. With Segovia's experience "picking" secondhand vintage clothes from rag yards—where items from estate sales, donations and store closures are sent to be sorted and sold—as part of a former job in Vancouver, the pair know exactly how to pluck the top items during shopping trips. Often, they alter the pieces before they sell them. But once the store is officially up and running, they'll also offer on-site alterations, such as hemming.

"Most of our things are between $20 and $40 for the most expensive (pieces)," Rafferty says. "The same kind of items would be $80 to $120 in the village. Having the vintage aligns with our morals of recycling, and also we remake a lot of the vintage."

Their other major goal for the space is to host concerts—a small stage is built into the corner of the room—that fit with a dive-bar vibe that's missing in Whistler.

"What we want to be is that tiny, little hole-in-the-wall place that you would never expect to see a big act," Segovia says.

In that way, Rafferty adds, they hope to contribute to Whistler's emerging arts and music scene. "Whistler has got so much going for it, but it's the one thing it's lacking—the arts and culture a city has. But it's weird because there's so much talent here."

While the pair is still tasked with getting the shop up and running (it will also include food, smoothies and a full coffee bar), they're already looking to the future—and how they might manage to take a vacation...sort of.

"Our dream is to get a road-tripping van and paint it our colours and go down to the States on buying trips, which will be like a holiday, but technically it's work," Rafferty says. "But that's what we love."

The Velvet Underground is expecting to celebrate its official opening with a party later this month. Check in to shopvelvetunderground.com for more.