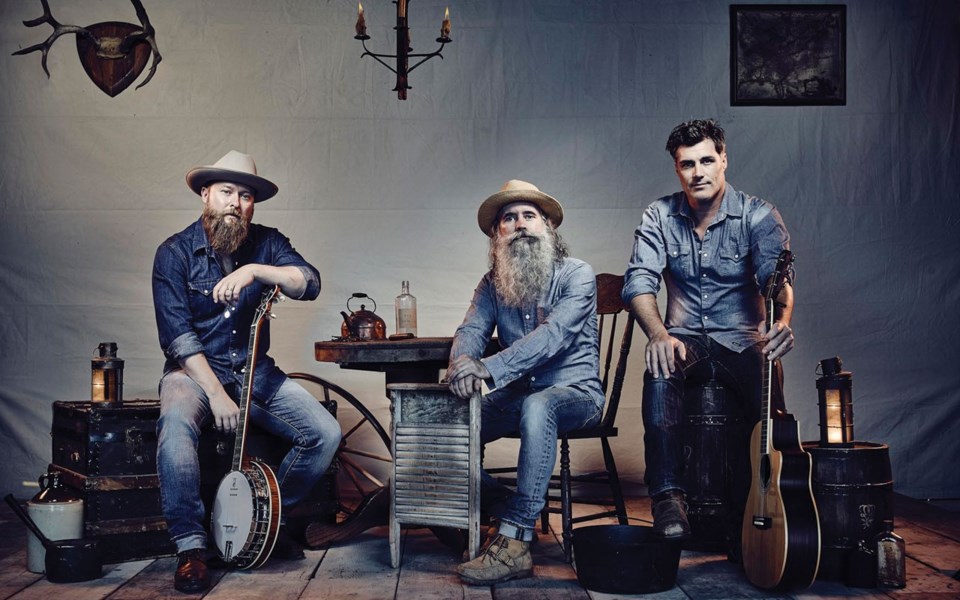 There are a lot of locations that you might imagine spawning a country band.

Perhaps shootin' the breeze on a truck tailgate or maybe drinking beer down by the river or, possibly, around a campfire jamming on an acoustic guitar.

But among the last on that (admittedly cliché) list, is a mansion in Point Grey, one of Vancouver's chicest neighbourhoods. But that's exactly where The Washboard Union first formed.

"We all ended up in this big, old Point Grey mansion; I don't know how it happened," says David Roberts, vocalist and washboard player in the trio, with a laugh. "There's no way someone should've been renting this house to a bunch of musicians ... It was really isolated. You'd come home and feel a million miles away from Vancouver and just naturally you'd want to hang out there. The guitars came out, we'd light a campfire and we'd just start playing some of the songs we all knew and grew up with."

All right, so maybe their origin story fits the bill just a little. But that approach has defined much of the band's eight-year career—they're a little bit country, but still don't fit perfectly into the role.

After Roberts moved into the mansion, he met stepbrothers Aaron Grain (guitar, vocals) and Chris Duncombe (vocals, banjo) down the hall, the trio first formed as a cleverly named band called Run GMC. "That was just a fun band," Roberts says. "No one took it seriously."

The same was true for the small concerts they'd host every Tuesday in the mansion's studio basement. Sometimes they'd play for a handful of people, other times, just to themselves. But the shows continued to grow until, one night, producer Garth Richardson (Rage Against the Machine, Red Hot Chili Peppers), caught one of them.

"He came and saw us and basically said, 'You guys made me laugh and smile. I'd love to record you,'" Roberts remembers.

Settling on the name The Washboard Union, they released their debut record in 2012. Fifteen country music awards and a Canadian Country Music Award later, the group has established themselves as a roots-infused country band that uses lush harmonies to make upbeat tracks that seem to appeal to kids, grandparents and even those who don't consider themselves country music fans.

"People have an image of what they think country is and we're a little bit different," Roberts says. "So for people who don't like that straight-up country, we're a bit of a bridge. We get that all the time. It happens so often: someone goes 'I hate country, but I like you guys.'"

Meanwhile, The Washboard Union is spreading that sound all over Canada this summer as they tour to support their latest record, What We're Made Of, which was released earlier this spring.

"We are literally going from coast to coast—the Yukon to the Atlantic to the Pacific," Roberts says. "We've got about 25 shows this summer; we're pretty busy up to September."

Not only are they hitting up festivals and bigger cities, but the band is also making stops in smaller towns like Teslin, Yukon and Orono, Ont.—as well as Whistler where they'll play Whistler Olympic Plaza as part of the Whistler Presents free summer concert series on Friday, July 13.

"We love playing big festivals—it's a blast, but when you go to these smaller communities you get to hang out for a day, hang out with the people living there and get the local culture," Roberts adds. "We went fishing in Teslin—you can't do that at a big festival."

Judging by their social media, the band really seems to carve some time for in-person connections on the road. "We're pretty sociable people to begin with," Roberts says. "If someone is going to take the time to reach out and say hello and we have the opportunity to say hello back, that's something we should do. In country music, that's what people tend to do."

But it's not just fans that they socialize with. Turns out the trio has managed to maintain the friendship that started in Point Grey. "Our wives and girlfriends get upset when we come back from tour and we're still calling each other up," Roberts says, with a laugh. "I always sit there and I wonder, 'How does a solo artist do it?' It would be a lot less fun."

Catch The Washboard Union on Friday, July 13 at Whistler Olympic Plaza at 7:30 p.m.