Toasting a decade to come

Vintage edition of Cornucopia shows festival has arrived
Nov 17, 2006 1:56 AM By: Nicole Fitzgerald 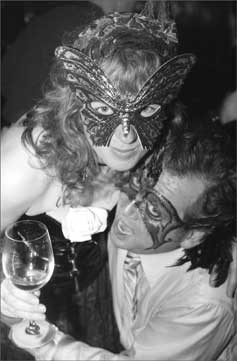 Two-thousand-six was a good year for Cornucopia and the 10 th edition of the food and wine celebration.

Attendance was up both by patrons and international media, package tickets sales were up 45 percent, more than 2,700 tickets were sold, Crush! broke yet another early sell-out record, more restaurants jumped on board the winemaker dinner program and the quality of events was ramped up to bubbly blowing proportions.

There was a lot to celebrate, especially with Ullr in attendance.

The biggest surprise of the festival was ARTrageous this year. The Whistler Arts Council’s annual artist extravaganza gave other higher-ticketed events a serious run for their money in the entertainment-wow factor.

The playful event was one big creative explosion as patrons were led into the psyche of artists’ passionate minds. Artists couldn’t keep paint on the walls as Chili Thom and a friend painted each other’s suits, as well as a large canvas artwork. Live detailed body painting transformed the otherwise ordinary into a living Chinese doll. Patrons got into the fun by creating their own masks on site, posing for televised pictures and dancing to the non-stop grooves of Five Alarm Funk.

And all this downstairs at Dusty’s with another upstairs floor to go. The upstairs gallery exhibit was awe-inspiring. Artists’ individuality glowed through in works from contemporary acrylics to cutting-edge photography. I only hope next year the food and wine will match the calibre of talent showcased in the living artist exhibit.

The most improved accolade goes to the Bearfoot Bistro’s Masquerave party this year. The Moulin Rouge theme drew sensual yet tasteful costumes; everything from corseted can-can dancing girls to ruffled tuxedo shirts and top hats. Often over-sexed in year’s past, this party elevated itself from streetwalker to high-end call girl, focusing more on the tease than the reveal, leaving the imagination to roam in sensual shadows.

While the “painted ladies” were out in full force, the true stars of the evening were the guest executive chefs and kitchen staff hosting tasting teasers that packed the food area almost as tightly as ABBA Cadabra did the dance floor. Sparkling wine flowed generously well into the morning hours and thanks to a change of evenings — which meant people didn’t come from Crush! already sauced up — Masquerave wasn’t the drunken chaos of years past, letting the true celebration shine through.

There was plenty to celebrate with Araxi’s 25 th anniversary coming to a climax at the Bubbles, Jazz and the Deep Blue Sea after party, which included the cutting of a six-tiered, Eiffel-Tower-high chocolate cake, accompanied by champagne poured from a bottle the size of a small child. This is the festival’s most lofty, high-class event — bent on nothing but spoiling guests. Set to easy jazz music, conversation is as plentiful as the surround-sound is sparkling.

As always, the elegant evening uncorked only the best, accompanied by an ocean of tuna and lobster spoon tasters as well as sushi that could be framed on the wall. I can now see why people gravitate to the outside martini bar after discovering freshly-squeezed-right-in-front-of-you fruit martinis — the kiwi, cucumber martini alone demands a return visit.

Although attendance wasn’t reflected in its worth, the Slow Food Artisan Market at the Westin was a festival highlight. I discovered Langford shortbread dressed in organic wild flowers, Giffard syrups (no refined sugars) that transform into fizzy non-alcoholic drinks in an instant and complex martinis in another, lemon YoGHEE for veggies sporting both taste and good health, and cosmetics with a conscience — you can both wear and eat the organic product endorsed by David Suzuki. Cheeses, chocolate fountains, wines, chef creations, art, and jewelry. It was like the Whistler Farmer’s Market on speed.

I finally figured out the secret to Crush! this year. With 70 wineries in three hours facing me, I compiled a hit list of favourites from various members of the food writing and serving community and sipped up right to the best, leaving time to pair savoury bites provided by local restaurants and do justice to both food and drink.

I wasn’t just attending the festival anymore, but thinking with it.

Over the last 10 years, the festival has become more than just a celebration of food and wine. It’s an all-encompassing cultural melting pot of food, wine, music, arts and movements that eventually culminate in a delicious way of thinking.