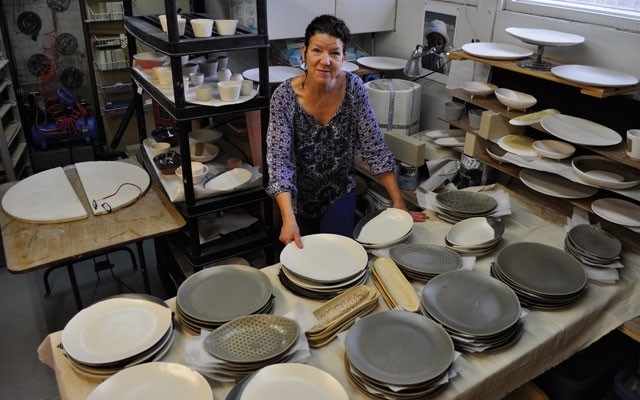 handcrafted Ceramicist Rachel Grenon with some of the plates she made for Whistler's Bearfoot Bistro. PHOTO submitted

It's early December and Quebec ceramic artist Rachel Grenon is in a woodshop near her home in the Eastern Townships making lids.

This is one of the final stages of a large commission from the Bearfoot Bistro for the former Whistler resident. Last summer, Grenon was asked to make a series of neutral coloured porcelain pieces that would be used to serve the Bearfoot's five-course tasting menu — to make a special dining night that much more special.

"They are part of the work I am doing for the Bearfoot," she says of the lids.

"I made a porcelain box and the lid and the bottom (of the box) are wood. It will be the box to put chocolates in at the end of the dinner. The lid will have the label of the Bearfoot on it; it's going to be quite nice."

And now, almost a month later, the 300-piece series is already being used at the restaurant — and playing a role in shaping the tasting menu put together by the Bearfoot's executive chef Melissa Craig.

"When I met them last summer, the chefs and I discussed every possibility for size and colours," Grenon says.

She has deep Whistler and Vancouver roots. She lived here for 15 years, studying at Emily Carr University of Art and Design, and apprenticing with master ceramicist Vincent Massey in Whistler, she left in 2003. She also worked at the Bearfoot Bistro, so it was easy for her to see how her work and the restaurant's could merge.

These days, Grenon returns to B.C. three months a year, to visit her mother on Vancouver Island.

"I went there to start the pieces and finish the samples. I went back in October to present them to the chefs, then returned to Quebec to complete them," Grenon says.

She was also in Whistler at the same time for a pop-up shop of her work at the Adele Campbell Fine Art Gallery.

"At that point, we made a few changes — to make some smaller pieces a bit bigger — so I had to work on certain moulds and I hired four people to help with the project. It was fun," Grenon says.

"I worked with different techniques; some of the smaller pieces were designed by casting and some were handmade, slabbed and roughed to give it a nice organic shape. It's a signature of my work; they are not round but more uneven.

Grenon explains that the porcelain was made using fine sand, the glaze used is more matt than glossy — she says this is deliberate so as not to take notice away from the Bearfoot's sauces.

"This porcelain I'm using is made to be fired at lower temperatures. It still has a nice connection between the glaze and clay. It is very solid, but it is not 100-per-cent porcelain like fine china," she says.

"Most people working with it would still call it porcelain."

She said that when the Bearfoot is deciding which new plates to purchase, the staff's first thoughts turn to the food and how they want to present new dishes.

"Many restaurants in France, England and Montreal are now interested in using handmade. It is a new trend and, of course, the Bearfoot likes to be ahead, so for me it is good timing," Grenon says.

Marc Des Rosiers, the Bearfoot's marketing manager, says Grenon approached them with the idea of using her ceramics.

"We invited her to dine with us last summer and she was able to be more specific about using her plates and bowls in a tailor-made way to what we offer customers," he says.

"What Melissa wanted was to be able to find the right plate and the right bowls; to really feature and work with the food."

Des Rosiers says staff wanted to personalize their five-course tasting menu and felt that employing a ceramicist to make unique plates and bowls would be the right step.

"They wanted something that was a little more creative, where they would be able to better plate and use this to be able to present their food. When Rachel met with us in the summer she came up with samples and photos," he says.

"The chefs were able to size and describe the specific plates that they wanted to use.

"One thing that was really important was that we didn't want the actual plate and the design of the plated to fight against the presentation of the food, so what we came up with is something that is neutral and frees up our chefs to present the food the way they want it."

"I liked the whole concept. She works with her hands and I work with my hands a lot," he says.

"She likes to create new things and so do I, I change my menus all the time. The fact that she came up with some ideas and then I worked on other ideas with her. She was very willing to hear ideas.

"Some of her pieces showcase the food, some complement the food, some elevate the food to another dimension. We sat down with Melissa as well to create the lines and design on the plates."

He said they are very happy with the results — with eight different types of ceramics, in multiple colours and designs.

"The tasting menu is very exclusive and we have to be gentle with the plates, they are so delicate," Fortin says.

"Everybody could be eating the same thing, but it will be plated differently on different colours and that is pretty cool."