Local black bear researcher uses years of observation and photography to educate others
Aug 29, 2008 9:22 AM By: Holly Fraughton 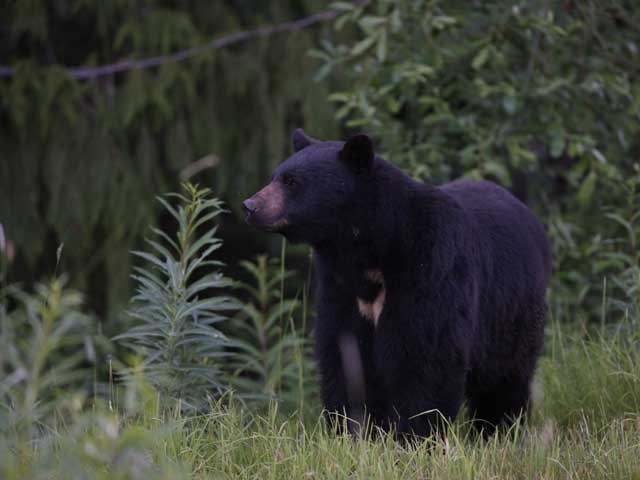 Bear-ly Aware Adult male bears, like the one pictured here, will be the focus of tonight's talk by local bear expert, Michael Allen. Photo by Michael Allen

If you’ve lived in Whistler for any amount of time, odds are, you’ve come across one of those lumbering brutes in your driveway, or along the Valley Trail. After the first few close encounters, most people lose that initial gut-wrenching reaction when they run into a black bear, sauntering away indifferently — it seems that we’re as used to them as they are to us, now.

But human-bear conflicts have grown to be quite an issue in the area, and there’s one local man who wants to understand our bears better, in hopes that we can live more harmoniously together.

Originally from the Kootenays, Michael Allen is no stranger to the great outdoors. Even before he came to Whistler 15 years ago, Allen spent years studying B.C.’s wildlife.

He doesn’t have a scientific background but has always had a strong interest in bear behaviour, and began studying local bears when he first moved to the Whistler area.

“I haven’t gone to school or anything or done anything like that,” he said, “… I guess the biggest thing that motivated me from the beginning was that no one knew anything about B.C. black bears. There’s never been any long-term study on a population of black bears in British Columbia, and there still hasn’t (been). I’m the only one that’s collected information on a group of bears.”

While a few short-term masters studies have been done on B.C.’s black bears, and a lot of longer-term research has been done in the southern States, Alaska and even Alberta and Eastern Canada, Allen speculates that entire populations of black bears in this province have been largely ignored because they’re so common.

“Whenever we have an abundance of something, it doesn’t really show up as a priority,” Allen explained. “I think black bears are often overlooked, but they are the largest mammal that’s going to walk through our backyard.”

As a child during the ’70s and ’80s, Allen points out that the only options for dealing with so-called “problem bears” were to shoot or relocate them.

“I wanted to try and collect information to try and understand them,” Allen explained. “Because you couldn’t really get information from the government. You could get pamphlets on the do’s and don’ts around bears, but those don’t really teach people.”

And people are usually at the root of any human-bear conflict.

“Look at all the problems black bears cause throughout British Columbia. The populations are there, but people really cause the problems; we set the stage for bears to get into trouble, constantly,” Allen said.

Often, the situation simply points back to the lesson of properly securing garbage.

“There seems to be all types of education on bears in Whistler, or awareness,” Allen reflected. “I think there’s more awareness than education, because often we hear of bears dying and hear bears getting destroyed. We hear why the bear’s destroyed, but we don’t talk a lot about that bear itself and the events that that bear experienced that led up to that situation… It instills a little bit of fear, but it doesn’t really accomplish anything, because it’s still happening.”

While he agrees that garbage management in Whistler is a large part of the problem, Allen said we should also be looking at the specifics of the bear’s history — how it got to the point of conflict.

He wants people to learn about how bears lead their lives, so we can better understand their behaviour. So he decided to observe a group of bears in the ski area for 20 to 25 years, an average female bear’s lifespan in Whistler, to learn about their lives.

“I try and go where I’m more effective, and my background is learning about the bears, so I spend my time with the bears, trying to understand how they live, and I do this as neutrally as I can,” he said, adding that he tries to observe without interfering.

He also takes a lot of photos while he’s out in the field.

“Photography is the basis of my research,” Allen added. “I try and photo document as much as a can.”

At the beginning of his research, he didn’t have the proper equipment.

“It was frustrating — lots of fuzzy pictures of bears,” he quipped.

But within the past five years or so, he’s managed to get his hands on some quality gear.

“You’d be amazed at the power of high resolution and a really nice image, how powerful that is.”

Allen takes the information he gathers in the field back to residents and tourists, through a series of talks and nature walks. Three times per day, he takes groups of up to six people out into the field with him, as part of the ski area bear viewing program, which he has been running for almost nine years.

“That’s probably the most effective form of bear education out there, is to be able to have people in front of a bear and talk about what that bear is all about, and then see what that bear does,” he said.

He also runs a school bear education program, bringing his photographs and bear stories to classrooms in the area all year round.

In all of his talks, Allen finds that photography is one of the best ways to get his point across to audiences.

“You can tell them a lot of things. Like, for instance, last night I was doing a talk at the Chateau to a bunch of Australian visitors in Whistler, and I tell them about why male bears will sometimes kill cubs of a mother to try and mate with that mother, and it’s all interesting and everything, and then the next slide, I show them a male actually getting ready to do it,” he said, adding that it really helped hammer the situation home.

The latest talk Allen is giving is part of the Whistler Museum’s summer speaker series, entitled, “Boisterous Boys: a journey into the lives of Whistler’s male black bears,” which is a shift from his usual subject matter. Allen usually focuses on the denning and behaviour of mother bears and their cubs, but this time, he’ll be addressing issues such as breeding, family break-ups and garbage addiction.

Back in July, he gave a talk on mother bear behaviour.

“In the past, I’ve always kind of focused on female bears and bear families, and everyone always responds softly to mothers and cubs, and that’s great, they’re the producers of the population. But what I wanted to do was kind of look at the male side of things,” he said.

Allen points out that there are some older male bears in the area who have never gotten into trouble with conservation authorities — they’re untagged and avoid humans altogether. But all too often, male bears around the age of eight or nine years old are the ones who end up killed.

“There’s obviously more risk in a male bear’s life, and male bears are primarily the bears in Whistler that get into trouble,” he explained.

Male bears leave their mothers at approximately 1½ years of age to fend for themselves, and it isn’t easy to survive when you’re competing for food within such a healthy black bear population.

“Yeah, they’re big cute animals, but they don’t have a cute life,” Allen points out.

Jehanne Burns, manager of programs and promotions at the Whistler Museum, explained that Allen’s talks fit in well with their programming.

“We definitely tell not only Whistler’s cultural stories, but we also tell Whistler’s natural history stories, so we think it’s important that people learn about the environment that they’re in, and that’s really why people are attracted here in the beginning, anyways, is for the environment.”

“It’s also something people are very interested in,” she added. “We get a lot of natural history questions at the museum — people want to know about the trees and the bears and rivers and stuff.”

Allen is basically a bear historian, and Burns pointed out, the only person in B.C. who has studied bears over such a long period of time.

“I don’t think you really find out what’s going on until you see it over a time, so I think it’s over 20 years for him now, over 15 years in Whistler, so he really is the expert.”