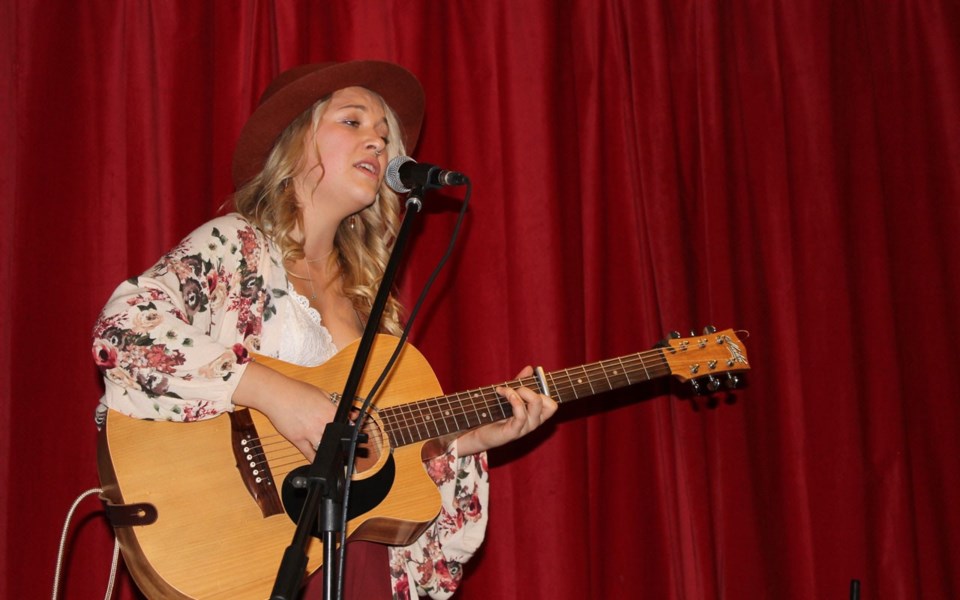 A packed house took in the finale of the 2017 Music Whistler Search on Thursday, 26 Oct.

And although she faced stiff completion, 20-year-old sensation Vendulka garnered the loudest cheers of the night, winning top prize for a series of heartfelt, deeply personal songs.

As part of the win, Vendulka was presented with a $1,000 cheque.

After the win, she was clearly elated. "That's going towards my pass!" she said, between the hugs and well wishes.

The Australian singer songwriter already has an album and two EPs under her belt. She began performing on the festival circuit at age seven and was writing her own songs by age 12.

Over the years she's performed for a wide-array of audiences, including the judges of X-Factor (Aussie edition).

Vendulka's life has also been intertwined with the mountains.

Before moving to Whistler, she spent an Australian winter in Perisher, a ski resort in New South Wales, where she carried out an artist residency.

While there she performed every day for 10 weeks.

Vendulka's experience paid off during her performance. Ukulele in hand, she played with the confidence of someone who's spent their fair share of time on stage.

After kicking off her set with an understated version of Bon Iver's heart-breakingly lyrical "Skinny Love," she transitioned to her own music.

One of her songs, "Wildfire," was inspired by a romance during wildfire season, when Whistler was engulfed in a cloud of smoke.

"I met a boy on a night when I was drowning in the smoke. And I met a boy who lit a spark and now there is an arrow in my heart.

And there's fire in my heart and there's ash in my lungs, and I can't tell it apart from the butterflies — around and around as the sky turns red and the moon comes out."

Another song, spoke to a dark experience she had on public transit.

Travelling home one night on a near-empty bus, a man kept inserting himself into a conversation she was having with a friend. When she finally asked him to but out, he became angry and belligerent.

"Something I realized is that there is not one single woman in this world who hasn't experienced sexual harassment or assault — not one," she told the audience.

"So this next song goes to all the women in the room. You guys are strong and amazing. And to the guys in this room that support strong women — thank you."

Said Whistler Question editor Alyssa Noel, who served as one of the judges, "She really captivated the audience."

"Everyone did a great job. They were all awesome," but Vendulka "stood out a bit above the rest." Noel was moved by the anecdote Vendulka shared. It was "super timely for the conversation we're having as a society."

In addition to Vendulka's performance, the audience was treated to a standout sets by Caitrìn Madden, a powerful singer who performed on both piano and guitar.

And on a more subversive front, Marcus Ramsay injected some levity into the evening.

With plenty of slide guitar, banter, and half winks to the audience, his set provided some good laughs.

"You can't help but rock along," noted one audience member.

Whistler Multicultural Festival hosts online events
Sep 25, 2020 2:00 PM
Comments
We welcome your feedback and encourage you to share your thoughts. We ask that you be respectful of others and their points of view, refrain from personal attacks and stay on topic. To learn about our commenting policies and how we moderate, please read our Community Guidelines.