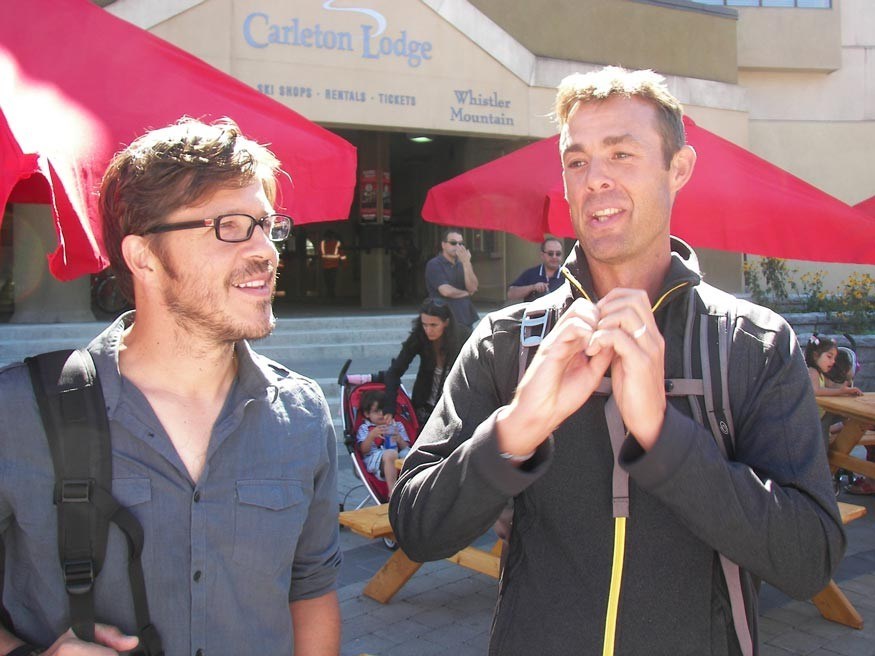 WANDER LEADERS Sean Hoess and Jeff Krasno are primarily responsible for all the additional yoga mats floating around Whistler this weekend. Photo by John French

The number of yoga mats in Whistler is up drastically.

Most of the mats belong to visitors who are in Whistler for Wanderlust, a first-time festival to Whistler.

The three co-creators of the event met with reporters today (Saturday) to talk about the festival. Jeff Krasno said the scale of Whistler makes it an exciting place for his team to hold Wanderlust.

“We’ve spent a lot of time thinking and strategizing how to create a yoga-critical mass in a place this big,” he told reporters gathered amongst yogis relaxing in hammocks and on pillows outside Whistler’s Lululemon store. “Having seen a bit of Crankworx and seeing how massive that has grown here… we have decided… in year one is to create a very sustainable model that will allow us to grow in future years.”

Wanderlust opened on Thursday and continues through the weekend with yoga classes, lectures, food events, hiking and concerts. The core audience is women between the ages of 25 and 44 but the creators agree the main demographic draw is people who live the yoga lifestyle, being mindful of their health and the wellbeing of their environment.

According to Krasno, the festival is creating a large platform around ideas like personal spirituality, yoga practice, buying organic foods and consuming ethically.

“Let what happens, happens, let the people come, let them network, let them meet each other and go out and change the world hopefully in a positive way,” said Krasno. “We saw a white space for that concept.”

The festival organizer shared an observation from the Michael Franti and Seane Corn show on Friday. Krasno said he noticed a man at the event that he described as somewhere around his early sixties and possibly from northern Europe. The man didn’t look like he had ever tried yoga at any point in his life.

“He got out on the grass, no matt and just started getting down and practicing yoga,” said Krasno. “For me that is the big win. If you can then touch people outside of the core people that are expected to come then it is like pushing the circle out – the tent is getting bigger. That can only have positive consequences.”

While the festival isn’t over yet, festival co-organizer Sean Hoess said planning is underway for a second Wanderlust in Whistler.

“I’ve had a lot of conversations already with the various stakeholders, the RMOW, Whistler Blackcomb, we have hotel partners and everybody seems to be reacting positively thus far so I’m pretty sure we will be back,” said Hoess.

According to Krasno, it just makes sense to look ahead to future years.

“It is a tremendous amount of work just to get anything going in the first year so to not be thinking long term about coming in with something of this scale is foolish,” said Krasno. He added that with each of the other Wanderlust locations the organizers have returned for a second event.

“We’re really happy with the results here,” said Hoess. “This is a great first year for us.

We’ll probably have 1,300 to 1,400 yogis walking around today and that’s exceeded our first year results in other areas so we’re really pleased. We feel like it is off to a great start.”

See www.whistler.wanderlustfesival.com to purchase tickets or check out the entire schedule.