Matt Paynter won EV Young Award for Most Outstanding Performance for his star turn in Newsies
Sep 13, 2019 2:00 AM By: Brandon Barrett 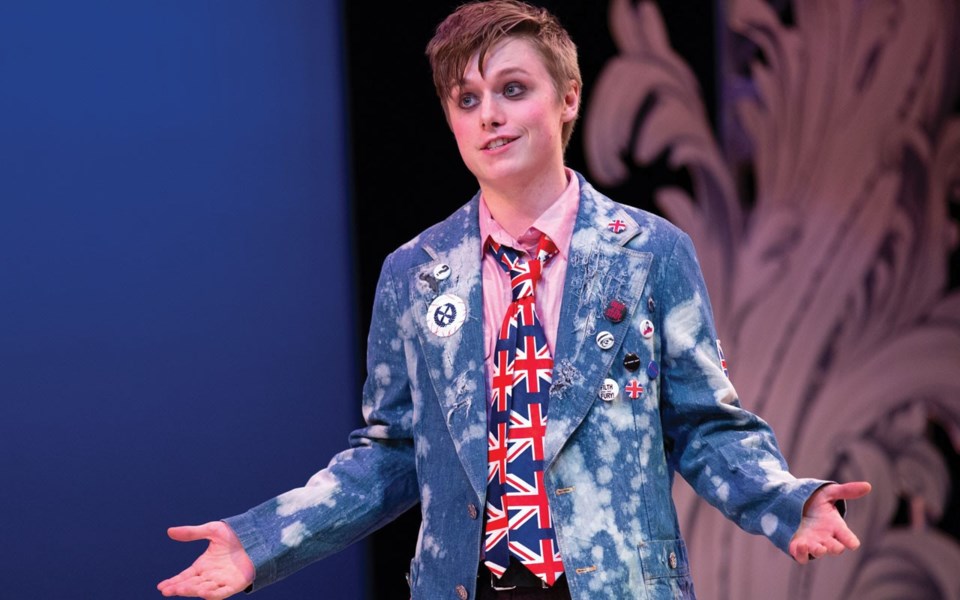 Matt Paynter can't remember a time when he didn't want to be an actor.

Coming from a family of dedicated film junkies, Paynter says that, as a kid, he was "always really quick to jump up and try to entertain groups of people."

The 22-year-old Whistler native has continued that trend into his adult years. The only difference is, these days, he's entertaining much larger groups.

A recent graduate of Capilano University's acting program, Paynter faced that classic artist's dilemma after high school: "There actually was a moment where it was like, 'Am I going to do acting or a science—you know, something responsible, and become an adult?'" he recalls.

Still unsure of which path to take, Paynter travelled to Southeast Asia on a gap year to do some soul searching. It was there he came to an important realization. "I went to Vietnam and Eat Pray Love'd myself, and I realized what I really wanted to do was always acting, so why not just do it?"

So far, it's proven to be the right call. Since making the move to Vancouver three years ago, Paynter has landed roles in a number of notable productions throughout the Lower Mainland. He played the reserved Colonel Brandon in Cap's production of Sense and Sensibility, a role he says was the hardest he's ever played. In a "baroque punk" version of Molière's 1672 The Learned Ladies, he modelled his character off of British indie rocker Alex Turner, lead singer of the Arctic Monkeys, and even played the band's 2014 hit, "I Wanna Be Yours," to open the show.

But it was his turn at Theatre Under the Stars in Stanley Park this summer as newsboy tough Morris Delancey in the musical comedy, Newsies, that truly reaffirmed that he had made the right career choice.

"That was just a really special show right from the get go," Paynter said of the two-month run, which earned him the EV Young Award for Most Outstanding Performance. "Just to get the opportunity to have that much stage time and really figure out what's working and what isn't, and how I prepare during the day and what leads to the most grounding performance, was really helpful. That's what I've taken away from Newsies more than anything. It was amazing. It was unbelievable."

Although theatre "is always going to be the real part of the industry I'm in love with," Paynter has also dipped his toes into screenwriting and directing, the latter he has taken to like a duck to water.

"I really want to write, direct and act, but I can see my career in like 30 years going just to directing, if that's what's available to me. I find it just as rewarding as acting," he said. "I wasn't expecting that. I was really nervous to direct. I just found a lot of success in it really quickly and continue to find success in it and it's just something I'm comfortable in now and am confident doing."

One thing you often hear about Vancouver's acting community is just how competitive it can be. Moving from Whistler's grassroots theatre scene to cutting his teeth in the Lower Mainland, Paynter says he feels the competition, but refuses to let it get to him.

"That competition doesn't help you as a performer. You can't go into an audition scenario comparing yourself to everyone else. There is no comparing yourself to other people because everyone's different. It's just whoever is right for the part," he says. "It can be easy, if you don't get cast, to go, 'Oh well, I guess I wasn't right for the part.' I think that's actually the right attitude to have: you need to roll with the punches. You can't survive in the industry if you're taking everything personally."

Next up for Paynter is the rock musical, American Idiot, which runs at the Centennial Theatre in North Vancouver from Nov. 5 to 10.

"Beyond that, it's really important for me to keep doing theatre, so that's where my brain is," he says. "I got this advice from my musical director at Newsies ... He told me, do straight plays, do film, do everything because that's what it takes to have a career in what I want to do. You need to be able to do everything."

For the multi-hyphenate Paynter, he's already well on his way.