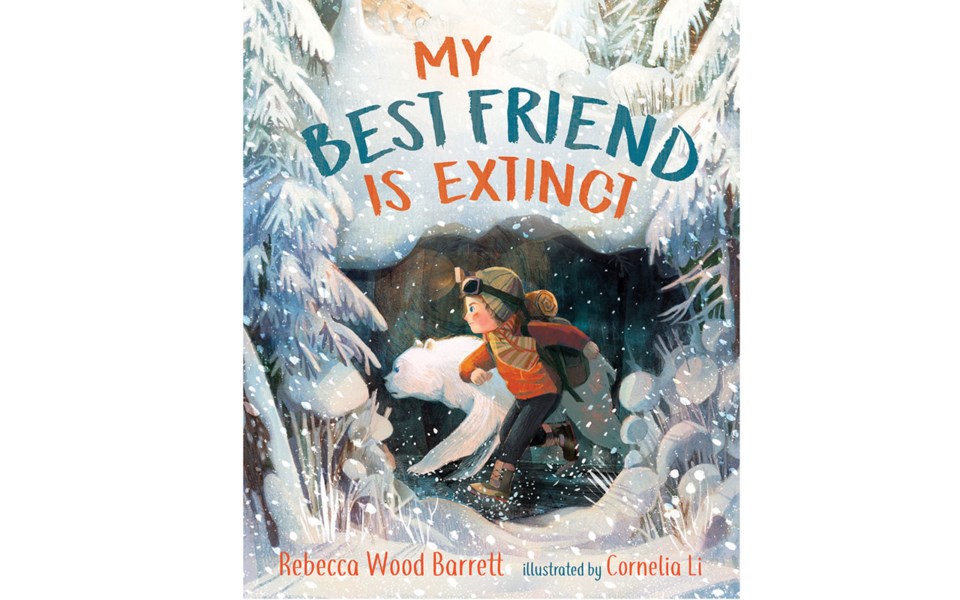 It’s hard to deny an element of fate in the story of how Rebecca Wood Barrett’s debut book came to be published.

The Whistler author pitched her first book to a publisher at the Whistler Writers Festival (for which she serves as festival manager) two-and-a-half years ago. While they took a pass that time around, out of the blue Wood Barrett heard from them again. “Have you got anything else?” she recalls them asking.

That book was My Best Friend is Extinct, written for middle-grade youth readers, officially released on March 16.

Wood Barrett suspects it was the main character, Henry, who resonated this time around.

“He’s a really funny kind of misfit,” she says. “He’s quite loveable. I have a writers’ group and we meet every month and the one common comment would be, ‘I just love Henry. I love being back with Henry again.’ You know you’re onto something when people root for that main character.”

The story itself takes place in the “wintery mountain town” where 10-year-old Henry and his mom have just moved. In the midst of an epic snow year—rumoured to be the start of a new ice age—Henry finds a prehistoric-type creature that’s injured in a tunnel running through a snow bank.

Dubbing the creature Yarp, he brings the animal home to nurse him back to health—only it’s not long before Henry discovers his new friend isn’t the only creature around.

“It’s one of those things, it started very small, looking out the window, seeing these huge snow banks,” Wood Barrett says. “All winter I was seeing these lumpy snow banks thinking, ‘Wouldn’t it be cool if there were animals in there and they came out at night to prowl the neighbourhood and no one knew?’”

During this time, she also came across the idea that there are quite a few North American animals that only went extinct 10,000 years ago—like the short-faced bear, the saber-tooth tiger, and giant sloths.

“I thought, ‘What if there were pockets of these creatures that never really went extinct,’” she adds. “Because you go out into the backcountry and you think, ‘Wow, there’s nobody out here.’ I can go out of my backyard 100 metres and get into trouble if I didn’t know what I was doing.”

While she initially intended to publish the chapter book without images, her publisher, Orca Book Publishers, connected her with Cornelia Li, who ended up contributing 30 illustrations.

To help inspire the images, Wood Barrett sent her pictures of her Spring Creek backyard.

“She captured the spirit of the snow and the colours of the snow, which to me is fascinating,” she says. “She has such a talent for bringing energy to a scene.”

Now with the book officially released—even landing on the B.C. bestseller list for two weeks—Wood Barrett is looking to celebrate her debut in a COVID-19-friendly way.

“It sounds so cliché, but it really is a dream come true,” she says. “I’ve wanted this for a long time. You can’t help but see other people publish and go, ‘Huh, that must be so nice.’”

To that end, My Best Friend is Extinct will have a virtual book launch on April 8 from 6 to 6:45 p.m. with award-winning Whistler author Sara Leach in conversation with Wood Barrett.

Beforehand, she will host a one-hour virtual writing workshop for young writers about how to build invented worlds.

“It’s a workshop for children—I would say eight to 12—but anyone can come,” she says. “We’ll be doing brainstorming, thinking up some new types of creatures. The whole idea of the workshop is about world building and how does your world and the setting of your story influence the choices you’ll make in terms of plots
and characters.”

That event takes place from 4 to 5 p.m. Both events are free, but you have to RSVP in advance to get the link at youthservices@whistlerlibrary.ca.