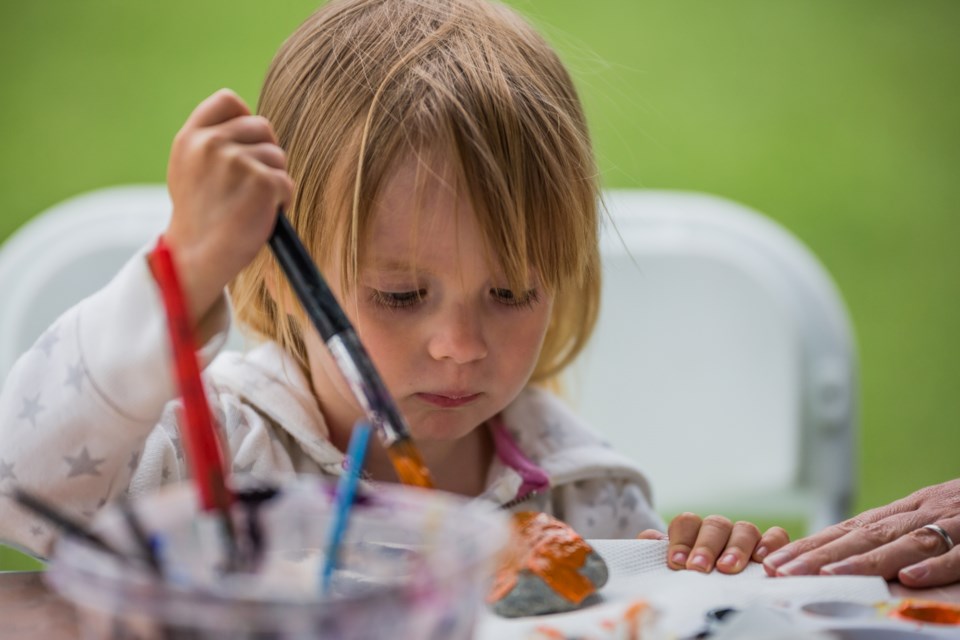 If there’s one rule that stands above all others in Andrea Mueller’s Imagination Station, it’s this: make a mess.

It’s a directive the painter and art educator tends to have to drill a bit more frequently as her students increase in age, but it’s an important lesson to take home no matter how old you are.

“I’m so proud of the kids. The little guys, they were three and four, so when they heard they had to make a mess, they were like, ‘Heck yeah! I know how to do that.’ The five and six group was a little bit more hesitant at first and I had to do a bit more explaining as to why we were going to [make a mess] and it’s OK if you get some on your clothes,” she explains. “Then the seven and eights took even a little bit more encouragement to get messy and get out of their comfort zones.”

It’s the kind of organized chaos Mueller likes to encourage as a way for her students to let go of their inner critic, a voice that tends to grow louder the older we get. It’s also the philosophy underpinning Mueller’s Imagination Station at this year’s Whistler Children’s Festival, which returns this summer after a one-year hiatus due to the pandemic.

Prior to the festival, which officially kicks off July 9, Mueller hosted two workshops for different age groups where she encouraged students to make a final masterpiece using a variety of mediums and styles.

“We’re painting with feathers and sticks and rocks and all this stuff,” she says. “You can do whatever you want. It’s perfectly OK to colour outside the lines.”

That all culminates with Imagination Unplugged, a month-long exhibit running from July 15 to Aug. 19 at the Maury Young Arts Centre that will exclusively feature artworks by local kids aged 12 and under—including the young souls who braved Mueller’s Imagination Station. Local kids who didn’t participate in Mueller’s workshops were also welcome to submit their own work, before July 4. It will mark Arts Whistler’s first live exhibit opening, set for July 21 from 3 to 7 p.m., since the pandemic began.

“We’re excited about this, our first official opening in, gosh, almost a year and a half,” says Arts Whistler’s executive director, Mo Douglas. “I’ve got no expectations; I just know it’s going to be highly engaging.”

Imagination Unplugged is one of two marquee in-person events, along with a slate of virtual programming, on offer for the festival’s 38th edition. The other, called Family Arts Adventure, is akin to a cultural scavenger hunt that will bring participating teams to 10 different public art sites around town with the help of a treasure map. (The maps can be picked up at the Maury Young Arts Centre and at Nesters Market starting July 9.) The winning team earns a $1,000 gift card to Nesters Market, $500 for second, and $250 for third, along with a number of other local gift certificates, art supplies and more.

“It takes families to 10 different pieces of awesome public art in Whistler, and then they have questions or riddles when they get to each point that helps them learn a bit more about what they’re looking at,” Douglas explains.

Organizers have also tweaked the festival favourite Make-It Tent for an online audience, offering a series of virtual Make-it-at-Home workshops for kids to follow along at home. Including a self-guided craft kit parents can pick up in advance, the workshops are designed to spark a child’s creative imagination.

“We were working on this before we had such a robust B.C. restart plan, so we had none of the information,” Douglas said of organizing the festival. “But what we did do is create some components of the festival that would work in almost any of those existing health conditions as we knew them, and could allow people to come together in a real-time environment and/or self-directed craft you could make at home.”

For more information and the full event schedule, visit whistlerchildrensfestival.com.