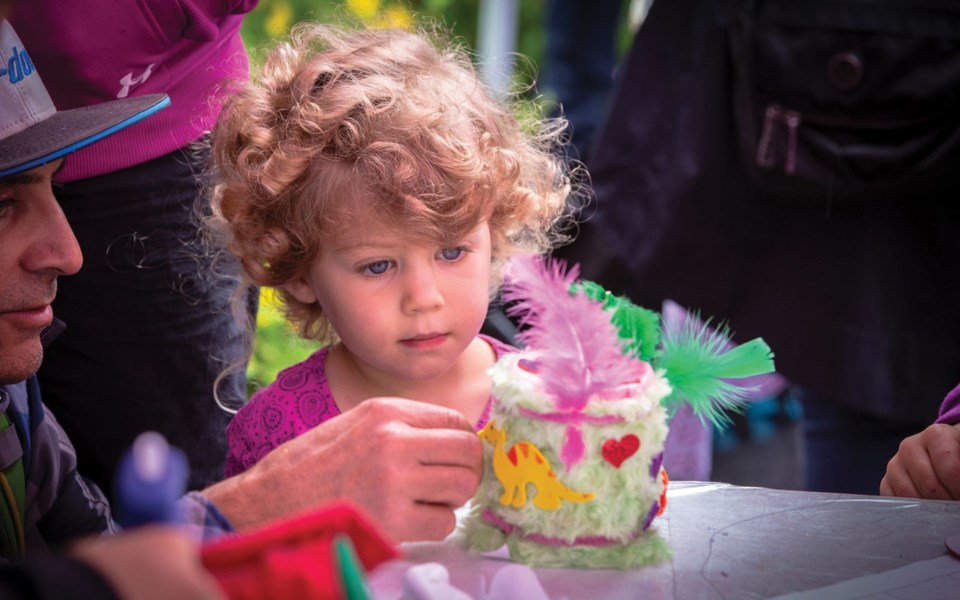 The Whistler Children’s Festival is one of the local events moving online this year. Photo by Rebecca Robbins

Rather than tossing in the towel in the face of COVID-19 restrictions, several local festivals and events have decided to shift online this year.

The Whistler Children's Festival, the Whistler Writers Festival, and the Holiday Market have all announced they will be moving to a computer near you.

"As a not-for-profit—but any organization right now—you can't afford to go headlong into a plan that has a high risk of losing money because you can't execute at the 11th hour," says Maureen Douglas, executive director of Arts Whistler, which runs the children's festival and the Holiday Market.

"With the children's festival, there was no inclination on the road ahead when people could gather. We realized it would take extensive distancing anyway. That would definitely not work with this."

Instead, the children's festival—which is marking its 37th year—will kick off early this year on June 12 at 9 a.m. with online videos of performances, craft workshops, face painting, magic and balloon animals.

"We can't replicate a festival that's six hours a day; we don't want people indoors for that long," Douglas says with a laugh. "But we want to create a fun opportunity for kids to dig in and see some favourites."

While the Whistler Writers Festival (WWF) doesn't yet have its talent list finalized, it announced last week that it would be moving its event online from Oct. 15 to 18.

"We've been looking at it for quite a while," says Rebecca Wood Barrett, program manager with the festival. "It's not a sudden decision. It's a slow realization based on a few factors. One is the overall situation and it becoming more and more clear that we won't be gathering in large groups indoors for some time ... We thought, 'Can we shift online?' We've been attending a lot of different events online and we feel pretty confident we can do it."

WWF organizers are finalizing details, but expect most of the reading events and workshops will translate well to an online format. They envision opportunities for Q&As after readings and digital face-to-face pitching sessions while still hosting marquee events like the Saturday Night Gala and Sunday Brunch.

In fact, one silver lining is being able to reach a wider audience while still maintaining the intimate feel the festival is known for, Wood Barrett says.

"In some ways, I'm hoping our fans, authors, and publishers will be able to send the message out farther," she adds. "People that wouldn't normally be able to come from different parts of the world will be able to see their favourite authors."

The festival expects to have more information in August, when it typically releases its lineup.

Even though it's not until the end of November, Arts Whistler is also working on shifting its Holiday Market online. That event usually draws anywhere from 7,000 to 8,000 people.

With 100 to 130 vendors—including Bratz Biz, which takes place alongside their adult counterparts—"off the top, we have more vendors than the number of people allowed to gather," Douglas says. "Even this far out, what we're learning is we're in a world of uncertainty."

To that end, Arts Whistler is working to create a listing section on its website with all of the vendors who would've been at the in-person event, linking to their pages.

"For so many people who like certain products—I go every year and buy these certain products—they'll be able to still do that directly online with vendors," Douglas says. "We'll be back next year in person and have another great market."