Percussionist and band will perform for 10 days at Firehall Arts Centre in Vancouver
Feb 5, 2014 8:00 PM By: Cathryn Atkinson 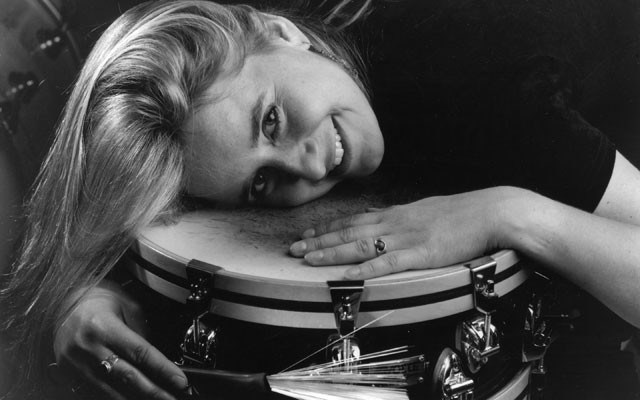 She's got the beat

Whistler percussionist Lauri Lyster has just finished teaching a four-week course for eight beginners at her home, now it's on to the Firehall Arts Centre in Vancouver.

Lyster is fronting her own "eclectic cabaret," The Drummer Girl, at the centre from February 12 to 22, with 12 shows in 10 days.

"I gig down in the city and I've played some gigs up here and some teaching, but I've never fronted my own project and I always wondered what that would look like because I play so many different styles," she says. "I play classical music, jazz, rock n roll beat, medieval, whatever... and so I've always been pretty confused about it and yet drawn to wanting to front something and create my own thing."

Fittingly, perhaps, for a Whistlerite, Lyster's percussive inspiration for creating The Drummer Girl came on skis.

"I was cross-country skiing here one day and, as a lot of drummers do, I was listening to the rhythm of the skis and thinking that it would be cool to write a song that used skis. I started pondering more on the theatrical and the dramatic and went 'Ah! Why don't I do a show and not a band, or band within a show, or a show within a band!' Something like that. I wanted to do a little of everything that I can do," Lyster says.

"I got super excited about it after I made that decision. It clarified everything and I got a real focus and started writing like crazy. After so many years! It's not that I haven't enjoyed the other projects I've been in, I love them. But this is super exciting for me."

Lyster describes the show as "a little bit of everything" from her 30 years as a percussionist with the likes of the Vancouver Symphony Orchestra and jazz ensemble Mother of Pearl.

In the tradition of musical entertainers like the late Victor Borge, who would tell stories and jokes between playing his piano in concert, Lyster has musical skits where she makes fun of what it's like to be a triangle player in the opera, another where she plays her daughter's baby toys, and another which explores what it is like to be a drummer who is trying to dance.

"I do a lot of introductions, tell stories like about the terrible things that have happened at gigs, things going wrong, illnesses, why I got brought into the drums, influences, answering questions that a lot of people ask me," she says.

She is backed up in her shows by her five-piece band, which includes her husband Simon Stribling on soprano sax, trumpet and penny whistle. Rene Worst plays bass, Brenda Baird is on keyboard/vocals, Kat Wahamaa is on lead vocals and mandolin, and Ben Henriques plays sax and clarinet.

When asked if there was a theme, Lyster says jazz is what connects the dots in her performance. She has written four original pieces, the rest is music she has arranged.

"What I didn't write I've performed for so many years that it feels like I wrote it.... It's an eclectic mix of some blues tunes, original tunes. I mostly play a kit with the band. Then I get off the kit and say a few words then change my clothes, because part of the whole thing is being the chameleon who is able to go from one gig to the next and then the band plays another song," Lyster says.

"That's more of what I play, but we've got a very world beat tune in there and we start out with a slow, sleazy blues tune, and we do a faster shuffling number from the Downchild Blues Band. There are also traditional Irish tunes that morph into traditional jazz."

This is the third performance of The Drummer Girl. It premiered at the Firehall Arts Centre in Sept. 2012. It was performed last July at the Orpheum Annex.

"We got tons of people. We almost sold out both of those shows and the audience interaction and response was great, which was such a relief," Lyster recalls. "It would be hard standing up there with four people in the audience and nobody laughing at what you say. But it was a great response, which is why the Firehall felt comfortable in offering me a 12-show run."

This kind of invitation is described by Lyster as "tremendous" because it means that the Firehall believes her talent can draw an audience. This is a huge step up for Little Drummer Girl, which was self-financed for its first performance.

"This time the Firehall has just given me money and the great thing about that is that I can pay everybody in the band, pay myself and actually hire a lighting designer, get some props, get a better videographer in, artistic consultants in to assist with some of the dramatic elements. I can get myself a good-quality wireless mic to avoid headaches there, get myself a couple of wigs, and so on. It's not a high budget, by any means, but I can augment my show, which is exciting," says Lyster.

After she and Stribling spend the summer working in Europe, Lyster hopes to come back with another show on the horizon.

"I would love to bring it up to Whistler and I am in discussions about it. It would be about 'can we get some bums in seats and make it happen?'" she says.