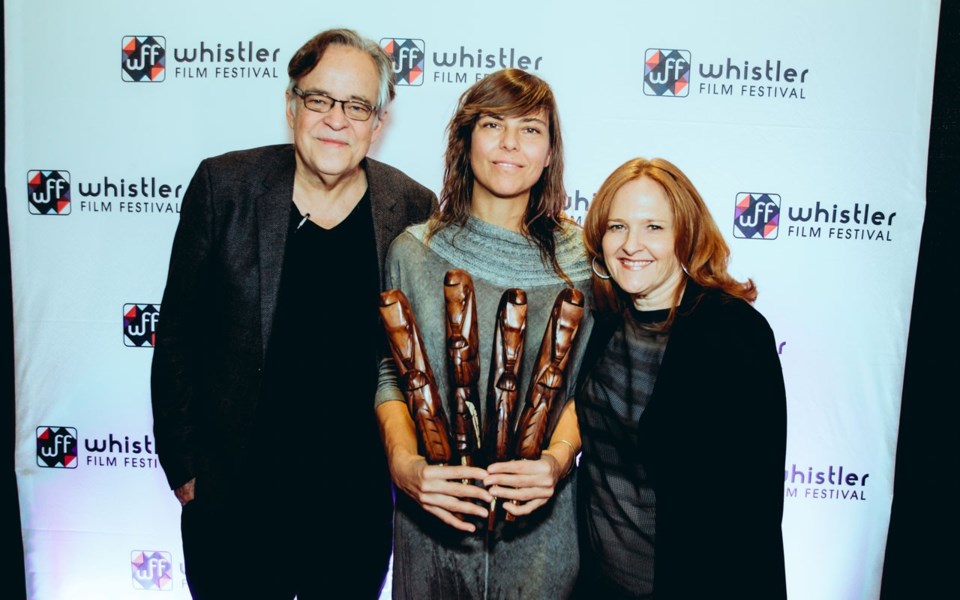 (From left) Paul Gratton, director of programming for the Whistler Film Festival, writer/director Sophie Deraspe, and Shauna Hardy Mishaw, executive director of the festival, pose for a photo at the 2019 festival. Photo by Eric Beckstead

The tickets have been taken, the popcorn eaten and—most importantly—the awards handed out.

Wrapping up the Borsos awards, Best Cinematography in a Borsos Film went to Celiana Cárdenas for her work in The Cuban.

• Once Were Brothers: Robbie Robertson and The Band, directed by Daniel Roher won the World Documentary Award;

• My Favourite Food is Indian Tacos, My Favourite Drink is Iced Tea and my Favourite Thing is Drumming, directed by Derius Matchewan, won the $1,000 Canadian ShortWork Award;

• Liberte: A Call To Spy, written and produced by Sarah Megan Thomas, who also starred in the film, and Deraspe for Antigone, both won the EDA Award for Best Female-Directed Feature;

• Pamela Gallant, on behalf of her film Monica's News, won the Women in the Director's Chair 2019 Feature Film Award;

• Hedyeh Bozorgzadeh won the WFF Power Pitch, including a $41,000 prize package, for her film Brother Man: The Antonio Joao Story.

The Sea to Sky Singers are set to celebrate the holidays with their show A Celtic Christmas.

The performance takes place on Saturday, Dec. 14 at 7 p.m. and Sunday, Dec. 15 at 2 p.m. at St. John the Divine Anglican Church in Squamish.

"Beloved carols with an unmistakeable Celtic flair will transport you across the foggy moors and settle you safely back in your own home, just in time for a traditional ceilidh!" the description reads. "Bring your instruments as we raise our voices (and glasses!) in a time-honoured sing-along."

Special musical guests will include Katherine Fawcett on fiddle, Max Kony on guitar, and Erik Musseau on flutes and pipes.

Tickets are $20 (free for kids 12 and under) at Anna's Interiors or Concrete Blonde in Squamish. For more, visit seatoskysingers.net.

On Dec. 20, the Audain Art Museum's Art After Dark series will host a glass etching session. Inspired by their current exhibit Emily Carr Fresh Seeing, participants will learn how to incorporate trees into their work.

"Experiment with creating an image, turning it into a resist layer and then etching it into glass," the description says.

The all-ages session, meanwhile, will take place from 3:30 to 5:30 p.m. and teach how to use vinyl tree cutouts and add them to clear cups. Kids 12 and under must be accompanied by an adult.

The workshops are free for anyone with a membership or with admission to the museum.