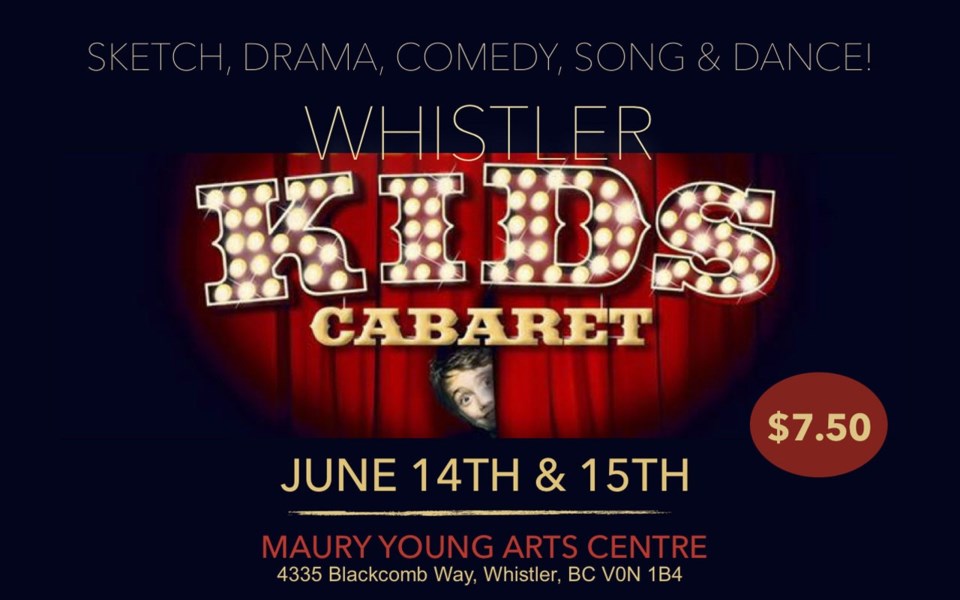 The Whistler Kids Cabaret will have shows on June 14 and 15 at the Maury Young Arts Centre. Photo submitted

While the long-time Whistler arts educator and children's entertainer has run everything from improv to acting to music classes for local kids, he wanted to tackle something more in depth.

So, he put some feelers out to see which young, local performers might be willing to commit to a five-month program and, ultimately, produce a variety show.

"It's been a crazy, beautiful adventure," Pettle says, just two weeks away from the three-show run at the Maury Young Arts Centre. "We started in January and broke it down into four different stages."

The group of 18 kids, ranging in age from eight to 12, spent four weeks learning improv and ensemble team building followed by five weeks of focusing on various performing arts—from singing to dancing and acting. (Only 15 will be performing as two kids moved away and one other isn't able to attend the performance and, instead, took on an assistant director role.)

Then, Pettle and Sarah-Dawn Robichaud, his co-director and the show's choreographer, cast each student in three different roles.

"We have monologues, we have scenes, we have musical theatre, we have dance, we have a live band, which is awesome," Pettle says.

"The kids were then cast in roles that would support them in areas they were strong. Then we were also casting in other roles that may be a little more challenging to help them develop those other areas. It was a balance. In addition to that, there was balancing out everybody in a way that they all had a chance to shine."

Most of the kids had some kind of artistic background, but part of the cabaret format means there's no stars.

"A couple kids had some dance backgrounds, a couple had done some acting with me last summer. They were inspired to keep going," he says. "Vocally, we had a bunch of kids that can sing. They have great voices. This production is supporting them in further developing, not just their talent, but their passion."

As a project spanning nearly half a year, the group bonded during the weekly meetings.

"We call ourselves a family now. Going into this production, there's so much involved emotionally not just for the kids, but for the parents who are supporting these kids, for the team involved," he adds.

Two shows will be open to friends, family and the public on June 14 and 15 at 6:30 p.m. However, a private donor purchased all 200 tickets for the matinee on June 15 at 1 p.m. That one will be open to kids only (ages eight and up). They can be claimed by emailing KidsCabaret2019@gmail.com.

"We wanted to keep it on the very, very low end, so that money wasn't a barrier to have community come support these kids," Pettle says.

"I want to rewrite what's possible for performing arts and theatre in this town. But that's going to take the community stepping up and saying, 'We're going to support this arts and cultural growth opportunity.'"

Tickets are available at showpass.com/o/arts-whistler/.