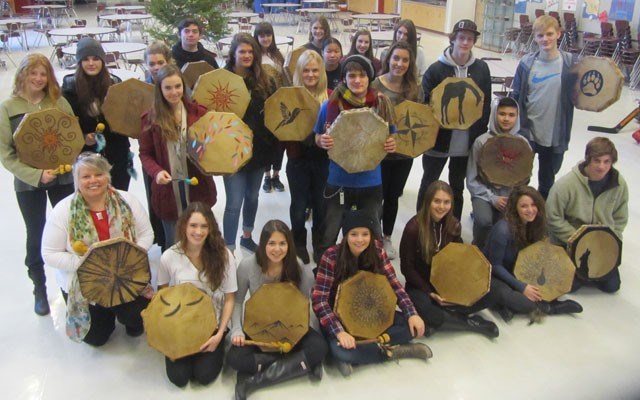 Grade 11 student Kelsey Thompson has built a drum unlike any other.

The 16-year-old stretched the rawhide panel herself, built the frame for it and soaked and laced strips of rawhide into a windcatcher pattern with beads in the back that serves to keep the drum together.

Then she painted flowers all around it and copied out a quote in its centre: "Every flower is a soul blossoming in nature."

Thompson is one of around two dozen Grade 11 and 12 art students from Whistler Secondary School (WSS) who built a Lil'wat Nation elk and deer rawhide hand drum with guidance from band members Josh Anderson and Tanina Williams.

In indigenous traditions, a hand drum made of animal skins is a valuable creation, used to give rhythm to songs and to tell stories — a cornerstone of First Nations' culture.

WSS art teacher Brenda Norrie says the value of the drum comes from the connection to the culture, primarily based north of Whistler, near Pemberton.

"When Tanina came in she did a really good presentation on how in their culture no one makes their own hand drums. They're gifts," Norrie says. "She told us she was giving the students the supplies as a gift from her people."

Norrie added that the other local First Nations community, the Squamish Nation, was brought into the learning experience by the presence of a performer to teach the youngsters how to drum.

Anderson says he spoke to the students about the importance of the hand drum to local indigenous culture.

"It was definitely a great experience. It kind of blew me away, the amount of work they did," he says.

Whistler is in Lil'wat and Squamish traditional territories.

"The fact that my students had to touch the skins to cut it, pull them over the frame. (Tanina) told how the artist needs to be a good space, energy wise, when you are creating it because it goes into the piece. There is a spiritual connection to it that I don't think the kids had really thought about before," Norrie says.

"When we were stretching them we had music playing. It was calm and serene. The process took a long time and it took quite a lot of strength. By the time they were finished even just constructing the drum, let alone decorating it, they were so attached to their pieces."Some of the students have already said they will be putting their drums into the WSS group show that will take place at Millennium Place next summer.

Student Shayna Ross-Kelly, 16, said she got a lot out of learning about a different culture in a new way.

"We learn a lot about First Nations culture in school, but being hands-on with a project that connects you to more of it is great," she says.

"I learned a lot of history just from making my drum and having the drumming lessons," she says. "I want to bring it home but I am afraid it might break."

Grade 12 student Christian Bishop-Anderson, 17, was in the process of decorating his drum with triangular symbols of courage and would love to present it to his aunt in Australia.

"She'll love it. She has a whole wall dedicated to things like this."