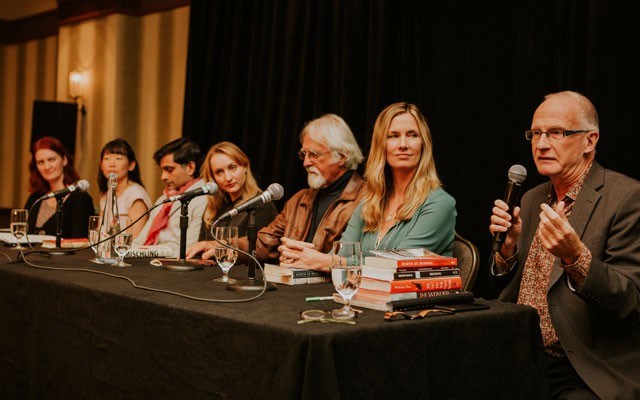 The Whistler Writers Festival (WWF) has launched a GoFundMe online campaign, with the aim of raising $30,000 by Jan. 15.

WWF executive director Stella Harvey says the money will be used to support the 2017 festival and expand literary readings from February to June.

"We've had such positive feedback in the festival; people were saying this was the best ever and that is great," she says.

"But it takes money. That's part of it. We want to plan for the future and keep the level of programing going. I don't want to compromise. And I want us to start experimenting with year-round programming."

Harvey hopes fundraising could lead to events each month.

"At the moment we don't have the money to do that. I'd like to pilot test a new initiative like this. And we would also like to have a base of money from which to start planning (the 2017 festival)," Harvey says.

"It's future programming, to broaden the scope, but also maintain quality."

"Sometimes grant money or investment money goes down and I just want to plan ahead," Harvey says.

"We've never done this kind of thing before and it is probably time we tried. And we just got our charitable status."

Donations over $25 will receive an electronic tax receipt. For more information or to make a donation, visit: www.gofundme.com/whistler-writing-society-fundraiser.

The Whistler Film Festival (WFF) has announced that Variety magazine's 10 Screenwriters to Watch is returning to the festival for the fifth consecutive year.

This year's honoured screenwriters are considered the most promising up-and-coming in the profession, and six of them will be in conversation during WFF with Variety's executive editor Steven Gaydos on Saturday, Dec. 3.

Davies, Ribon, Anderson, Moyes, Komarnicki and Cuaron have confirmed they will attend.

"Over the past five years of Variety's 10 Screenwriters to Watch events at the Whistler Film Festival, it's been great to introduce writers such as Taylor Sheridan and Ted Melfi, who are both major Oscar contenders this year, as well as writers such Phyllis Nagy, Meg LeFauve and Emma Donoghue and many others who went directly from Whistler to Oscar races and international acclaim," said Gaydos in a press release.