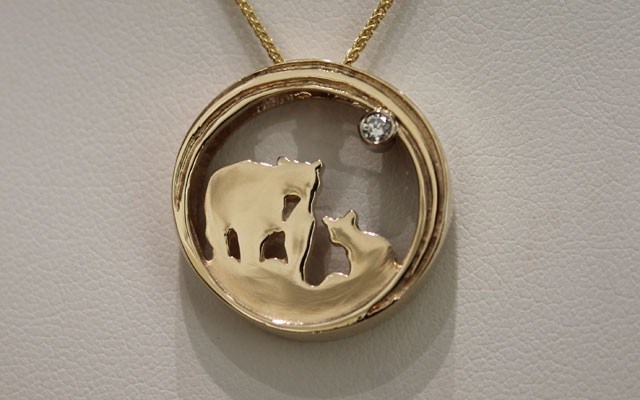 REMEMBERING JEANIE This 10K gold pendant shows Whistler black bear Jeanie and her cub — the cutout represents her white fur neck patch. Necklaces and earrings with the iconic bear have gone on sale at Keir Fine Jewellery. Get Bear Smart will receive 10 per cent of sales proceeds. Photo BY Cathryn Atkinson

Pendants and earring with the image of one of Whistler's wildlife icons have gone on sale — with some of the proceeds being used to support the resort's Get Bear Smart Society.

Jeanie — a 21-year-old black bear — was a prolific mother with a distinct triangular bib of white fur below her throat. She was shot by conservation officers on Oct. 20, 2011, after weeks of increasing conflicts with humans.

The incident made national news, not least because Jeanie was a much-loved animal locally and a bruin personality for tourists taken bear watching.

Lana Beattie of Keir Fine Jewellery decided to offer jewelry with an image of Jeannie to raise funds for the society; 10 per cent of every sale will go to the society.

"We want to start giving back to the community and felt this was one great way to do it," Beattie says.

"Lana had seen the bear on the side of the (Sea to Sky Highway) almost every night when she drove home. He would be grazing and visible to drivers," Dolson recalls.

"One day she saw a guy shooting at the bear. It's scary. Never mind killing the animals, it's scary to have someone with a shotgun on the side of the road. What if it ricochets?"

In the end, the hunter departed and the bear was unhurt, but the experience shook up Beattie, who co-owns the jewelry store in the village.

It got her thinking and wondering how they could help the Get Bear Smart Society (www.bearsmart.com). The society seeks to minimize human-bear conflict and lower the number of bears killed in the resort each year.

Beattie says: "I've always loved bears. I love the fact that we have resident bears in Whistler that have nicknames and all that."

Then Beattie thought of Jeanie.

"I met Sylvia and she is an absolutely lovely woman. I felt that with Jeanie being a huge, prominent figure in the community, it would be good to help Get Bear Smart and remember Jeanie at the same time," she says.

The circular pendants depict Jeanie and her cubs cut out in relief. There is a little opening on the bear's chest in the shape of the white patch she had.

They are Canadian designed and made by Edmonton jewelry maker Hannah Pazderka, using Canadian silver and gold.

"I worked closely with Hannah and we came up with this idea... it was really important to me," Beattie says.

"And Jeanie was also known because she had so many cubs, so we incorporated that as well."

Beattie says she believes there will be local interest from people who fondly remember Jeanie, but also from visitors looking for a piece of Whistler history.

"It's an amazing Whistler story. We've already sold some," she says.

"We had just received the first prototype for Jeanie bear... It was a good way to feel the pulse and find out what people think. One purchaser who lives on Vancouver Island ordered a gold and silver one.

"They were here on vacation five years ago, went on a bear tour and met Jeanie."

"One of the locals walked in for ArtWalk and bought one," Morin says.

"Many people come here to see the bears and they want to have a bear pendant. Being able to share this story with tourists helps Sylvia with the message she is trying to send about being bear smart. Don't get too close, because a great bear like Jeanie will need to be destroyed.

"It's a bit of education for the tourists, a memorial and a way to raise funds. It's a good combination."

Dolson, who had been photographing Jeanie around Whistler since 1996, agrees.

The funds from jewelry sales will go towards restoring bears' natural habitat and planting mountain ash, blueberries and huckleberries.

"We plant natural bear foods in areas on Whistler Blackcomb that would draw bears out of the valley and out of conflict," Dolson says.

She says such restoration is badly needed as development in Whistler has removed many plants that bears eat.

Keir Fine Jewellery has done this sort of fundraising before, selling leaf pendants to raise funds for Vancouver Children's Hospital.

The Jeanie jewelry is now part of the shop's permanent collection.

"Proceeds will continue to be raised for the Get Smart Bear Society over the long term. It's hard for groups like this to raise funds and we are so happy to help," Beattie says.