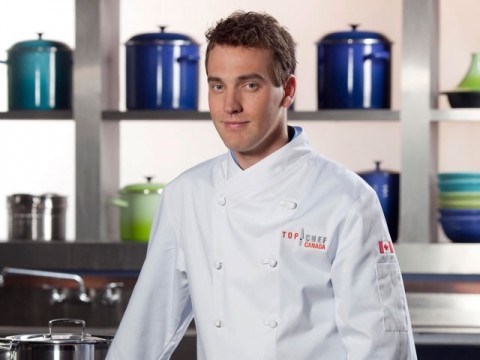 Whistler will have to wait until summer to find out if one of its best chefs is Top Chef in Canada.

"There was a lot on the line, you know," says Clayton Beadle, Four Seasons' chef-de-partie and one of the stars of a new13-part reality TV series for the Food Network filmed last July.

"You want to show the world what you can do," he says.

"It was tense but once the time starts (for the challenges) it all goes away. It's just you, your cutting board and the clock, so it kind of melts away."

The reality program Beadle took part in was modelled after the popular American version, where chefs compete in cooking challenges to win the title of Top Chef, and where one person is eliminated every episode.

For contractual reasons Beadle cannot share the outcome of the competition with anybody, nor can he discuss any drama or tension between the show's participants.
"It was pretty tough keeping it a secret, especially from my family, but it's all about the show," he says.

"If you talk about it, it ruins it for whoever was going to watch the show."
The producers have not provided him with advanced copies of the program so he's as interested as anybody about how the drama and tension between contestants has been edited for television.
Yukon-born Beadle says the adrenaline during filming was huge and so was the pressure. His heart was racing the entire shoot but the video cameras had very little to do with it - in the end, it was all about proving himself as a chef.
All the Four Seasons' staff, and especially the head chef, was very supportive of his inclusion on Top Chef, says Beadle.
To get on the show Beadle had to fill out an online form and submit a five-minute video - which has been posted on YouTube - showing his life inside and outside the kitchen. From there, he did an on-camera cooking interview in Vancouver and shortly afterward producers let him know he had been picked for the TV show.
Beadle was flown to Toronto for the shoot, where he competed against 16 other chefs from across Canada - including many who own their own restaurants. The 26-year-old says he was the youngest and least experienced of the bunch.
"It was intimidating a bit but I think I held my own really well," says Beadle adding that the show has given him the confidence as a chef to move forward with his career.
He's planning to stay with the Four Seasons company for a while and hopes to work around the world through them and so maybe, just maybe, he can one day earn the title of Top Chef: Four Seasons