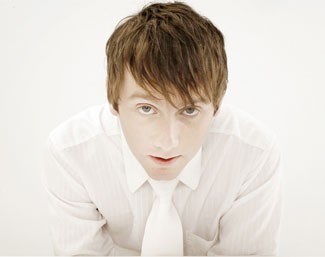 Who: The Ladies And Gentlemen with The Belushis

What: The Punk Night

Hanging out in a dark, depressing basement in the middle of a Canadian winter definitely makes you honest.

If you’re Thomas D’Arcy it also makes you creative.

The Toronto musician, formerly associated with indie rock band The Carnations, sojourned to his "dark depressing" basement on several occasions over the course of 2004 to write songs about life. He emerged blinking into the sun in January 2005 with a self-recorded album he called Small Sins – a collection of smooth, synth-pop and introspective lyrics like "we were younger then and had good intentions but threw them all away," sung by D’Arcy’s plaintive vocals over falsetto choruses of D’Arcy backup vocals.

The upbeat groove juxtaposed with contemplative themes begs comparison to U.S. electronic/indie rock collaboration The Postal Service. However, while that project was a coming together of several musicians, Small Sins is a one-man effort.

According to D’Arcy, he wasn’t even intending Small Sins for release. It was mere "self-expression," and a dramatic departure from the music he was known for with The Carnations.

But the appealing new sound garnered enthusiastic response and the interest of Vancouver-based label Boompa Records, who will be releasing Small Sins in early September.

With that, the former Carnation has been reincarnated as The Ladies and Gentlemen, a one-man operation at its core, a five-piece band on stage.

While the pluralistic name makes a bit more sense when referring to the band, it’s an obscure fit for a solo recording artist. According to D’Arcy, he chose it because he considered just his name "Thomas D’Arcy" would make for a rather awkward-looking band T-shirt.

"I wasn’t quite ready to just be that solo artist guy. I think that’s more for your mid-30s," the 25-year-old musician remarks dryly.

Along with the ambiguous name, D’Arcy has adopted a white dress code for the project, which extends to all band members involved in the stage show.

It’s a stylish, spare aesthetic that has worked well for the individual dates the band has played thus far. But life on the road can be grungy and D’Arcy admits that the upcoming tour of Western Canada – the Ladies And Gentlemen’s first – will reveal if they can keep their whites white.

"I went out and bought five white shirts before we left," he says. "My pants are already a little bit dirty. I think we’re going to start looking for a Javex sponsorship or something. It’s hard to keep clean. Although you do get kind of a Zen thing going on where you know you’re wearing all white and you find yourself acting accordingly, not sitting on dirty sinks and stuff. You find yourself acting differently."

Image aside, there is a deeper reason why D’Arcy has chosen to make Small Sins his ‘white album.’

"I think there’s a lot of guilt on the record," he muses, explaining that the small sins of the title refer to the way people are able to gloss over mistreating each other in everyday life, the concept that little white lies can be just as harmful as the big black ones. There’s a search for truth and absolution going on amidst the fizzy keyboard-driven sonic backdrop.

It all sounds very heavy, but Small Sins is a light at the end of the tunnel.

One of those inspirations, he admits, was the incessant Canadian winter that first drove him to the basement. But the result has been an album for all seasons.

"Even though songs were about winter, it’s got a summertime groove," D’Arcy quips. "It’s a nice one for the car."

Joining the Ladies And Gentlemen at the Boot Pub this Sunday night are Vancouver rockers The Belushis, a brand new five-piece Vancouver band that blends wacky antics such as giving away drinks from an onstage beer cooler and handing out honourary "Belushi" nametags such as ‘Obi-wan Belushi’ and ‘Hand-job Belushi’ to showgoers with driving, kick-ass rock ’n’ roll.

"Such a novelty element would sink a lesser act," claimed Vancouver alt-weekly The Georgia Straight.

The Belushis released their debut album, Rich In Broken Glass, last month and will hit Whistler as part of a four-date show package frontman Shawn Belushi says the band is calling the "you bring the heavy; we bring the party tour ’05."

It’s an act worthy of the spiritual namesake who is likely looking down from the great toga party in the sky with pride.