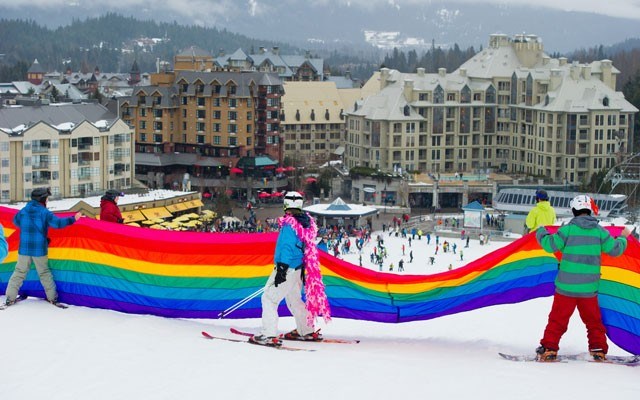 Whistler Pride Parade This year the parade takes place on Jan. 31, starting at Olympic Station at 2:30 p.m. All are welcome. Photo BY Mike Crane/Tourism Whistler

Dean Nelson knows WinterPRIDE, Whistler's gay ski week, is going to be packed this year and this has brought in some changes.

"We already know that our attendance is up, so our après ski events have all been moved to Buffalo Bills for Monday and Tuesday, and for Wednesday to Saturday it will be at the (Whistler) conference centre because we are already over capacity for the GLC," says Nelson, WinterPRIDE's CEO and executive producer.

"It's good, but it's bad, because the GLC is one of our favourite locations and with many of our guests it's their favourite après for the whole week because it's just a dynamite location. The sales actually took us by surprise and we weren't watching it that closely. Then all of a sudden I was 'Oh my God, what's our capacity at the GLC? We're over sold, what are we going to do?'"

This is a nice problem to have. What happened?

"More people are coming in from Europe, which is good. Those numbers are up. I think that's because Ivan Gomez (who plays in the second week at the Snowball at the conference centre on Feb. 1) has been able to get people excited about coming to Western Canada. This is his first time in Western Canada, it's a big deal," says Nelson.

"So we're seeing countries we've never seen before with guests coming here, like Croatia. Who would have thought we'd have a whole group of guys coming in from Croatia? Lithuania... amazing."

WinterPRIDE is a weeklong festival, which welcomes gay, lesbian and transgendered skiers and sliders. Running from Sunday, Jan. 26 to Sunday, Feb. 2, it combines après fun and frolics with some intense slope action.

Nelson says they had aimed to increase mid-week stays and it appears to be successful.

"Instead of getting people to stay for an average of four nights, (we are) getting them for closer to six nights. I think we're moving in that direction, which is encouraging," he says.

"It's hard for us to say (the exact numbers) because we've been harping at people for the last few years to tell us their plans in order to plan the festival. Most of our sales have traditionally happened the week of the festival. We won't actually know until people buy the tickets because we anticipate that ticket sales during the week of WinterPRIDE will be down dramatically because advance ticket sales have been high. But if people are still coming in with the same buying pattern with over 50 per cent of our ticket sales happening the week of the festival, then we're going to be really, really slammed this year. I'm going to be freaked out in a good way."

Nelson adds they want "to up the party experience, the dance experience" this year.

"We already have the ski experience down, so we thought this year why don't we concentrate on the party engagement?" he says.

"We have the Mr. Gay Canada grand finale again, which we're really excited about, and Courtney Act with Chris Olwage. I think Courtney will blow the crowd away (See Pique's interview with Courtney at right)."

The winner of the Mr. Gay Canada will represent the country in Rome.

Nelson wants to encourage locals of all sexual orientations to come out and enjoy the fun.

"It's an amazing night with the fashion show, with a human rights performance that is educational but not preachy, about why these types of events are still important today. With some of our straight allies, it really hits home... how many people take for granted so many things, like declaring your sexuality," he says.

"That's why I think the Mr. Gay Canada competition is so important. It raises awareness for young gay men and the LBGT community."

He also encourages the community to come out to the Pride Parade, which takes place with a ski down from Olympic Station at 2:30 p.m. on Jan. 31.

"Pride Toronto is flying all the way here because they are hosting World Pride this year and they will be marching in it. Everyone is welcome, to either watch or even take part," Nelson says.