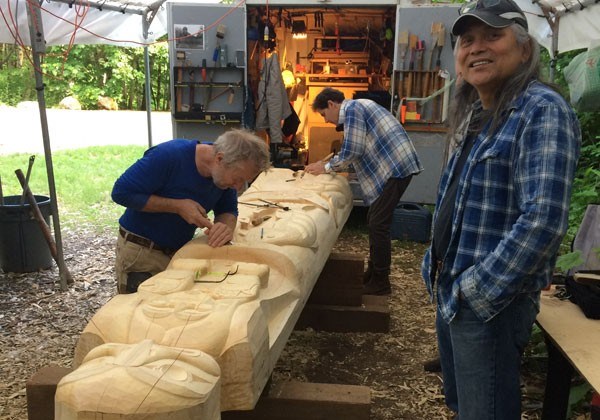 Emerging from cedar Squamish Nation artist Xwalacktun says he had been thinking of the meaning of truth and reconciliation for years before this project began. Photo By Cathryn Atkinson

Since April, the carver and designer — whose monumental work He-Yay MeyMuy (Big Flood) sits at the entrance to the Audain Art Museum — has been chippijng away at a new house pole for the Big House at the Cheakamus Centre in the Paradise Valley near Squamish.

"By tomorrow we might even have all of the details done," he says while taking a break from carving with his three-man team.

"Then we're going to flip it and cut out the beam to hold it up."

The as-yet-unnamed pole is about two subjects close to his heart: truth and reconciliation. It is also being carved in time for Canada's 150th birthday on July 1.

At around four metres, it is full of Coast Salish symbolism.

The top is an eagle with wings almost akimbo, protecting a person; just below them is the Coast Salish Eye, a well-known design that was recently adopted as a symbol by the District of Squamish.

The eagle represents The One (Great Spirit) watching and seeing; the Coast Salish eye represents "seeing beyond," or inward vision. On the eagle's wing is a feather and a flame.

"The feather symbolizes healing and the truth, the feather is used in talking circles, passed around when you want to share your thoughts, feelings and emotions," explains Xwalacktun.

"The flame symbolizes the healing and it is from the design of the Truth and Reconciliation Commission logo, I just made it into my own style."

The protected human holds its hands out in the sign of O'Siyam, which means "thank you" in the Squamish language.

"It is for finally recognizing the past. As the generations go through, we're going to get through this and pass it on, so we raise our hands in a thank-you gesture," Xwalacktun says.

Below this are two salmon, representing balance for humans and the Earth, a tribute to the Cheakamus Centre, previously known as the North Vancouver Outdoor School, an education facility that has brought thousands of children to the banks of the Cheakamus River.

"Balance is what the outdoor school is all about, thinking about the balance and teaching the young ones about that," Xwalacktun says.

At the bottom of the pole is a wolf to symbolize family.

Xwalacktun adds: "It shows we all have to work together to move forward."

The pole is crowned by a large butterfly to represent the changes that are coming.

Whistler's Squamish Lil'wat Cultural Centre donated the cedar trunk used, with the cost of the pole covered by a grant from the Squamish Arts Council.

The Big House teaches visiting youngsters about Squamish Nation culture and stories. Xwalacktun has a longstanding relationship with it, having designed it in 1983, when he was 25.

A recent open house at the centre brought members of the public in to watch the carvers at work, with Xwalacktun sharing the stories behind the pole.

"When we're here, we work keeping positive thoughts and enjoy it. We put some good energy in it," he says.

The team currently carves three days per week beneath a protected canopy, next to the outside area where visiting children learn and eat.

"The kids like it. We join them and have lunch with them, eat bannock with them, tell stories and allow them to ask questions," Xwalacktun says.

Asked what the project of a reconciliation pole means to him, Xwalacktun says he feels he has been working on it "for a lot of years."

He says: "I've always been focused on that truth and reconciliation idea, but I didn't know the words. I just wanted people to understand who we were and where we come from. Every now and then I would bring up the stories from the past briefly, just to plant the seed in order to move on to where we are."

Xwalacktun tries to move truth and reconciliation forward by living it.

"The way I see it, it's going to take a long process for a lot of people because we were in the second and third generations of people going to residential schools.

"When people have been through trauma, it gets passed through families... our parents didn't know how to be parents because theirs weren't around. It was hard for them to learn about love.

"For my parents, I never heard them say that, but now I am starting to hear them say that. They feel safe to say it now. And I learned from my children, they taught me love."

The naming of the pole will be part of the witnessing celebration that is taking place in the fall.