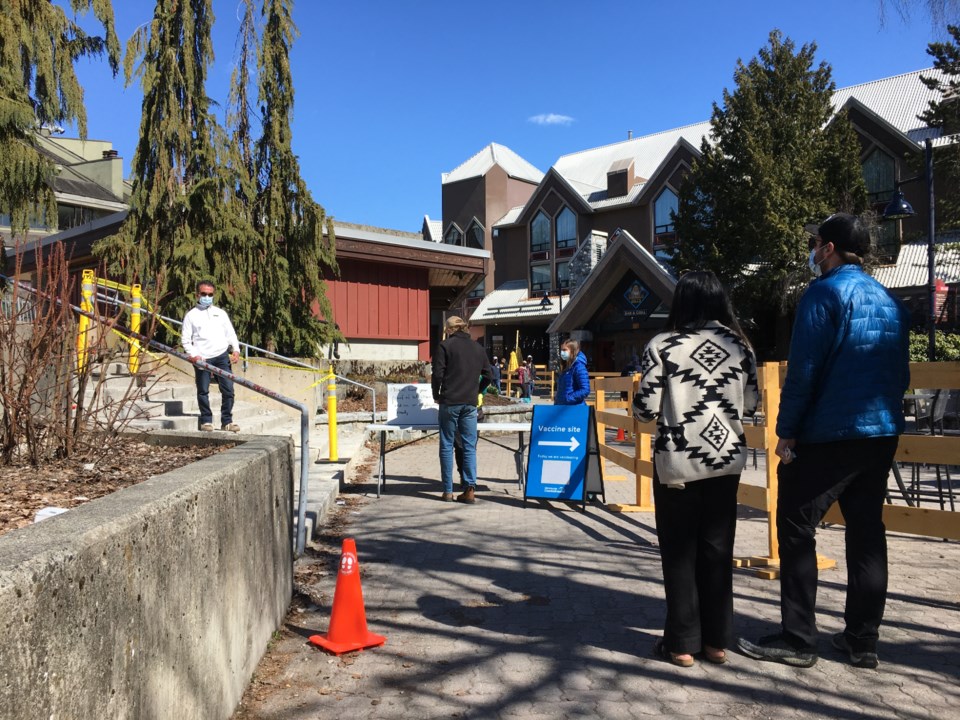 A line-up at the Whistler Conference Centre in April during the community's mass COVID-19 vaccination program. Photo by Braden Dupuis

Nearly 90 per cent of Whistlerites over the age of 12 have received the COVID-19 vaccine, which would appear to be the highest immunization rate in the province.

As of June 2, Vancouver Coastal Health (VCH) says 89.3 per cent of Whistlerites aged 12 and up have obtained at least one dose of vaccine. Although Whistler isn’t specifically shown on the BC Centre for Disease Control’s vaccination map, an 89.3-per-cent immunization rate would rank higher than any of the dozens of local health areas listed. Global News also reported last week that Whistler had the highest rate of any community in the province, a point that Pique is awaiting confirmation on from VCH.

By comparison, the Central Coast had the next highest rate at 84 per cent, while Prince Rupert, which, like Whistler, was home to a mass vaccination campaign after an outbreak earlier this spring, shows an immunization rate of 74 per cent. The Howe Sound health region, which includes Whistler, Pemberton, Squamish, Lions Bay and parts of the southern Stl’atl’mx Nation, has a vaccination rate of 75 per cent.

It’s a far cry from this winter when Whistler was experiencing what was among the worst outbreaks in the province. At the height of the outbreak, the week of Jan. 26 to Feb. 2, Whistler tallied 259 new cases. That dropped off steadily until March, when cases began to climb again, leading to the closure of Whistler Blackcomb for the season and a high of 218 new coronavirus cases for the week of March 22 to 28, as the resort became the North American epicentre for the P1 Brazil variant.

The most recent Whistler-specific update from VCH came last month, when the resort tallied less than five new cases between May 4 and 10, down from 15 the week prior. Between Jan. 1 and April 25, Whistler recorded 1,775 COVID-19 cases, representing approximately 13 per cent of the community’s 2020 population of 13,948.

The Howe Sound health region, meanwhile, has seen its case numbers follow suit, with just five new cases between May 23 and 29, the most recent data available.

Following the mass vaccination of eligible adults and workers in April, Whistlerites have now begun receiving invitations to obtain their second dose, although at press time, there didn’t appear to be any spots available locally. More booking appointments are typically added as weekly shipments of vaccine become available.

The National Advisory Committee on Immunization (NACI) released new guidance on Tuesday, June 1, giving the nod to mixing and matching doses of COVID-19 vaccines but only under very specific circumstances.

Provincial health officer Dr. Bonnie Henry has said that it is safe and effective to get a different vaccine “if you need to.”

“It’s equally safe and works just as well to have either mRNA vaccine,” she said.

Health officials at both federal and provincial levels have said it is preferable Canadians are inoculated with the same product for both doses but the new recommendations now offer flexibility.

Canada is facing supply issues with AstraZeneca, which is a viral vector vaccine, while mRNA vaccines like Pfizer and Moderna have made up a far more significant portion of the country’s supply.

"This is not a new concept. Similar vaccines from different manufacturers are used when vaccine supply or public health programs change. Different vaccine products have been used to complete a vaccine series for influenza, hepatitis A, and others," the committee said.

But it’s not a two-way street.

“Persons who received a first dose of an mRNA vaccine (Pfizer-BioNTech or Moderna) should be offered the same mRNA vaccine for their second dose,” according to the recommendations.

NACI said if the same mRNA vaccine is not readily available, another mRNA vaccine can be considered interchangeable.

Henry said the possibility of mRNA mixing and matching will mostly affect those who received the Moderna vaccine for their first dose, owing to “spotty” supply issues, but it will ultimately be up to British Columbians to decide if they use different vaccines.

Meanwhile, B.C.’s top doctor said the province would begin shipping out second doses of the AstraZeneca vaccine on Thursday in a bid to begin administering the jabs by Monday.

“As more mRNA vaccines, particularly Pfizer and Moderna, became available, we no longer needed to have an additional vaccine in our armamentarium and we were watching what was happening around the world, as well as the very real but rare risk of having blood clots from AstraZeneca,” Henry explained Thursday. “So what we made the decision to do was save the doses that we had on hand so that we would have AstraZeneca available for people for second doses, when the time came, and to make sure we were not unnecessarily taking additional vaccines out of the global supply, when it was needed so badly in many other countries.”

AstraZeneca was being administered in B.C. at pharmacies and pop-up clinics rather than at the mass vaccination sites where Pfizer and Moderna have been administered. Individuals who received their first dose of AstraZeneca at a pharmacy will be invited to obtain their second dose by the same pharmacy.

What remains unclear is how the process will work for those Whistler employees who received a first dose of AstraZeneca at pop-up clinics as part of the resort’s initial immunization push. Pique has asked VCH for clarity and will update this story if and when we hear back.

-With files from Tyler Orton, courtesy of Business in Vancouver