UPDATE: A snowboarder has fallen to his death on Whistler Mountain 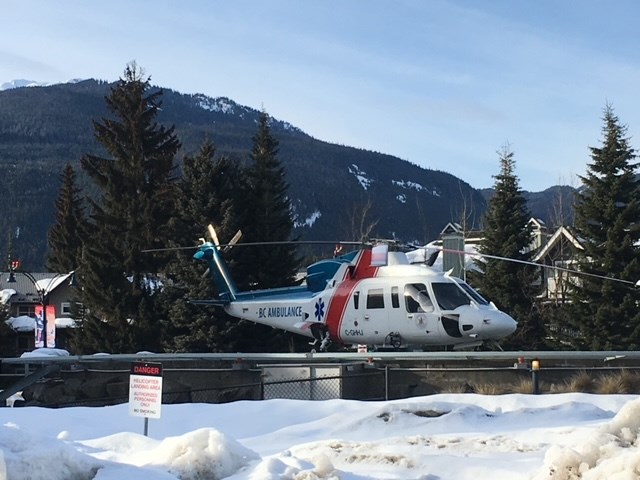 A snowboarder who fell off a cliff, and died, was taken by helicopter to the Whistler Health Care Centre Jan 7. FIle PhotoClare Ogilvie

A Whistler snowboarder has died after falling approximately 20 metres off a cliff near the Peak chair.

The man, in his 20s, fell off the traverse to West Bowl at approximately 10:20 a.m. on Jan.7. The Whistler RCMP was requested by BC Ambulance to assist, but upon the boarder’s arrival at the health clinic, it was determined he had succumbed to his injuries. Whistler Blackcomb patrol was also involved in the rescue.

"Our thoughts are with the family, friends, and those who worked tirelessly to try and save this young man," said RCMP Sergeant Sascha Banks in a release. "As we have seen in the past few weeks unfortunate incidents can happen to the most experienced adventure[r]s... please take that extra moment, that extra check of your surroundings and ensure you have all your safety equipment."

While authorities haven't named the man, friends on social media have identified him as local bartender and climber Jesse Van Roon. A fundraiser has been set up to help cover funeral costs and support his family at GoFundMe. At press time, nearly $8,000 had already been raised.

"Let’s give Jesse the send-off he deserves," wrote a friend on social media. "Jesse with the big heart & even bigger sarcastic mouth."

The death marks the fourth snow-sport fatality in the Sea to Sky since Dec. 28. That day, two snow-bikers were caught in an avalanche on Goat Peak, near Pemberton, before their bodies were discovered the following day. Then, on Dec. 31, tragedy struck again when a skier died after falling into a tree well near the area of Brandywine Bowl, just south of Whistler.

The Whistler RCMP will be working with the BC Coroners Service and Whistler Blackcomb on this incident. If you have any information and have not spoken to the Whistler RCMP yet, please contact 604-932-3044.