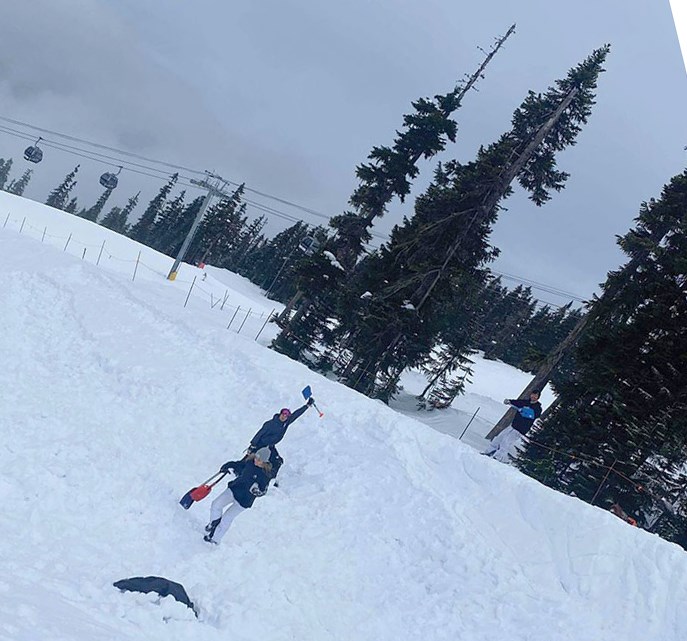 Better known now as Halfpipe Guy, Liam Robinson launched a campaign based on sheer resolve and some impressively eloquent writing to uncover and rebuild the halfpipe on Blackcomb Mountain. Photo submitted

Charles Kane had his Rosebud; Ahab had his Moby Dick; and Liam Robinson has his halfpipe.

The 29-year-old Whistlerite’s own Homeric struggle began in earnest last month when he decided he wasn’t about to let the ski season wind down without at least attempting to get his beloved halfpipe built on Blackcomb Mountain. And like those monomaniacal obsessives before him, Robinson knew the odds were stacked against him, but he wasn’t going to let that stand in his way.

“The past couple years I’ve been here, I was always waiting for the pipe to be built,” he said. “This year there obviously was no desire from [Whistler Blackcomb] to build it at all, so I just wanted to shine some light on that.”

And shine a light he did.

Robinson first took to the popular Whistler Winter Facebook group to enlist the help of his fellow locals to complete his vision for a DIY halfpipe. Combining a steely determination with a poet’s ear for lyricism, Robinson played to Whistlerites’ sentimentality to drum up support.

“Inside each Whistler locals heart is an uncut halfpipe, waiting to be born again,” he wrote in a Feb. 25 missive. “Do not let this burning ember go unnoticed.”

In case anyone needed convincing of his dedication to the cause, Robinson eventually began the painstaking process of building the halfpipe himself.

By hand. With a single shovel.

“I had flagged this early on with the ops guys and we were joking that we would provide him with shovels, but sure enough, he came prepared,” said Marc Riddell, the West Coast communications director for Whistler Blackcomb’s parent company, Vail Resorts.

Robinson said he was fully prepared to build the pipe himself, so when groups of residents started showing up to help, shovel in hand, he was pleasantly relieved.

“That was pretty cool when people started to come help and made things a lot easier. Even with five people, you could see how much progress we made,” he relayed. “We could’ve actually finished it in a couple days. It’s super realistic. It’s not hard to do, and everyone made such a big deal about it.”

While Robinson may be downplaying the labour and technical know-how involved in cutting a modern halfpipe, his singlehanded determination earned him a slew of admirers—including at Whistler Blackcomb, despite the fact the ski resort ultimately shut his project down.

“We applaud his enthusiasm and he’s got a number of fans on our staff,” Riddell noted. “We obviously wanted to do it and couldn’t make it happen this year, but certainly it’s going to come back roaring next year.”

In a pandemic year when there has been plenty to complain about—much of which can be found in the aforementioned Whistler Winter Facebook group—perhaps it was Robinson’s unwavering optimism that struck a chord with so many.

“A lot of people, when they are confronted with a problem or a situation that seems like a lot of work, instead of pursuing it, they create excuses not to,” said Robinson. “I feel like that entire attitude, if it didn’t exist, we would be able to get so much more done.”