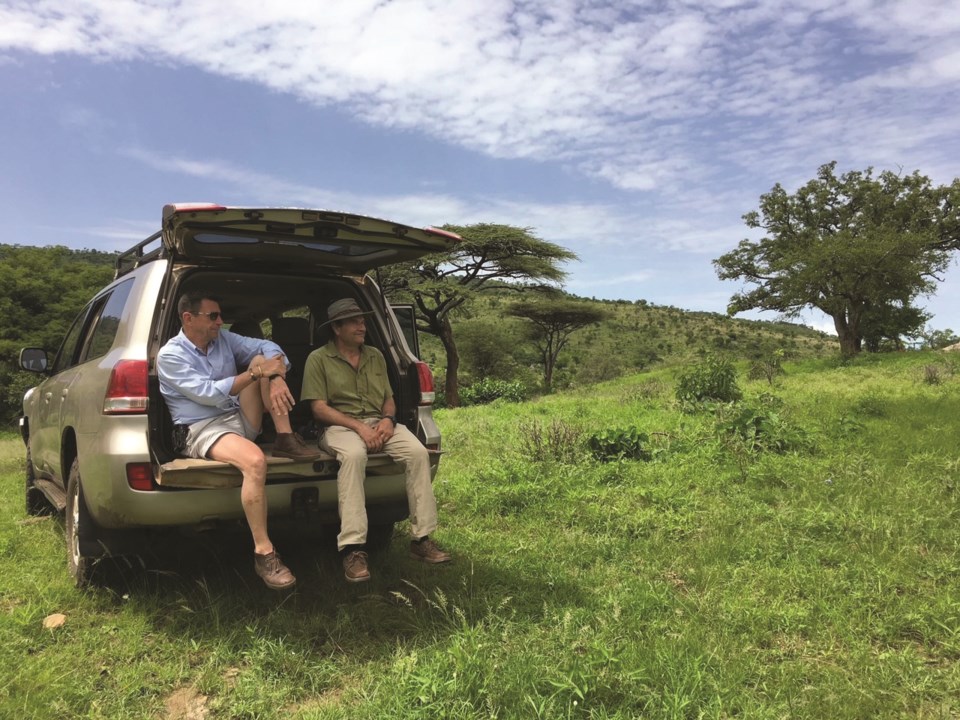 As an entrepreneur with a long career in telecoms, Whistler’s Pat Montani started and sold a number of businesses in his day. But it was a grassroots non-profit, Bicycles for Humanity, which he started with his wife later in life that gave him the most pride.

“A comment he always said to me was, ‘The greatest business I ever founded was the one I never got paid for,’” said daughter Angie Holmstrom.

The 2019 Whistler Citizen of the Year, Montani died on Friday, April 23 after a short battle with pancreatic cancer. He was 71.

Family and friends remembered him as a tireless visionary ahead of his time who had a knack for bringing people together through sheer force of will.

“He’s super passionate and people were always drawn in by the passion,” recalled wife Brenda, who said she realized she was going to marry Pat the moment she first laid eyes on him as a 19-year-old student at Wilfrid Laurier University. “He didn’t do any small talk or anything. He was a big thinker and passionate about the things he thought about. I think that’s what drew people to him. There was nothing boring about hearing him.”

It was that tenacity and foresight that served Montani so well over the course of his career, first as an innovator in the videoconferencing field, and later on as a dedicated philanthropist. Longtime friend and Whistlerite Dave Ormerod, who first met Montani in 1969 as his defence partner on the Laurier hockey team, considered him to be “one of the world’s greatest salesmen,” even if Montani didn’t quite see it that way.

“Some of the things he could do and the way he could get people on his side no matter how outlandish some of the schemes and opportunities were was incredible,” he explained. “He was as smooth as a gravel road but he always got things done.”

A committed family man, Montani always had a big heart. Local realtor Shauna O’Callaghan said she was looking for “grandparents for hire” when she was a single mother in the mid-2000s, and even considered placing an ad in the paper. When Brenda, a school counsellor, heard the news, she asked O’Callaghan if Pat and her could apply for the job.

“That started almost 20 years ago. We share every special occasion, every Sunday dinner, and that’s how our journey started together,” she said. “Pat was definitely family to me and my children, and I couldn’t have raised my kids without him.”

Although always generous with loved ones, it wasn’t until middle age that Montani’s philanthropy began to spread beyond the community level. What started as a small project to collect and deliver used bikes to Mexico eventually gained traction in the media and blossomed into Bicycles for Humanity, which today counts more than 50 chapters worldwide and has delivered more than 300,000 bikes to the developing world.

The organization really grew legs after a chance encounter between Montani and the late professional cyclist and Tour de France commentator Paul Sherwen, who leveraged his contacts in the cycling and business worlds to grow the non-profit, which aims to empower distressed communities through the gift of mobility. It was also through the cyclist that Montani first visited Karamoja, Uganda, where Sherwen lived, a place that left a profound impression on the entrepreneur.

“When I went there with him, he was the most peaceful I’d ever seen,” said Holmstrom. “The people gave him the strength, really. I don’t think he gave the people as much as they gave him.”

Montani’s experiences in Uganda also imprinted on him the grassroots approach that has come to define Bicycles for Humanity. Counting no paid staff and little overhead, the organization is centred around an “empowerment-first” approach that puts people over profits.

“He’s so anti-NGO. He thinks they’ve done more damage over there than good and he knows that a lot of the money doesn’t go to the people, it goes to the organization and the bureaucracy,” Brenda said. “He’s always tried to do everything he’s done without it being about money.”

An excellence centre planned for Karamoja offering educational resources and training, primarily in technology, will only further cement Montani’s legacy.

It’s telling that even in his last days, Montani was still focused on giving back.

“I was joking about him and Paul [Sherwen] causing trouble up in heaven, and he turned and looked at me and said, ‘I just hope there’s some good I can do up there,’” remembered Holmstrom.

In lieu of flowers, the family is requesting that donations be made to the Sea to Sky Community Hospice in Squamish, where Montani spent his final days.