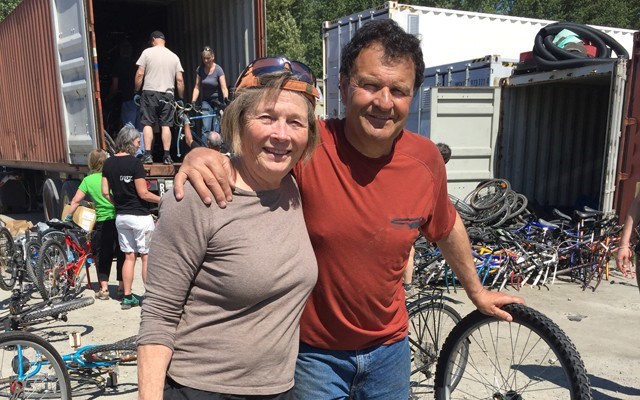 ride on Brenda and Pat Montani, founders of Bicycles for Humanity, will accept a Governor General's Meritorious Service Medal at a ceremony in the spring. photo by claudia frowein

Whistler's Pat and Brenda Montani don't exactly like to bask in the spotlight.

In fact, when the founders of non-profit Bicycles for Humanity reached out to share the news of their recent Governor General's Meritorious Service Medal recognizing their years of philanthropy, the couple was quick to downplay their efforts.

"There are so many companies and individuals who did amazing things here, and Pat and I would love to be able to share this with them all," Brenda said. "We all need to be reminded of what a special community we belong to and how eager the locals are to participate in worthwhile efforts."

Bicycles for Humanity was started in 2005 as a way to help AIDS workers in the developing world reach more patients in need. Since then, the organization has shipped more than 155,000 bikes to impoverished areas across the globe.

"Mobility is the key to a better life," Pat said.

Now the Montanis are being recognized for their work after being nominated for the Governor General's Medal, which will be awarded in Ottawa next spring. It's an honour the couple never would have dreamed of.

"It feels special to win it because you don't expect it, and you don't think just delivering bicycles for so many years would get you recognized," Pat said.

Although Whistler has served as the epicentre of the organization for several years, Bicycles for Humanity has grown to include 50 chapters in eight countries at its height. Through it all, though, the Montanis have been fervent in maintaining their grassroots approach, with no paid staff and little overhead.

"One of the reasons we started this was I got tired of NGOs asking me for money and then I'd look at their financials only to find out they were making a ton of money and very little of it went to whatever the project was," said Pat. "We did it with very little money in a grassroots fashion, and we're the largest in the world at doing what we do, and that's move bikes. To me that's an important part of the success."

This year marked the last shipment of bikes from Whistler, as the Montanis hand over the reins to a pair of Vancouver volunteers who will organize next year's West Coast delivery. Brenda said they couldn't have done it without the community behind them, whether it was organizing fundraisers or donating storage space and bikes.

"This community knows Bicycles for Humanity well, but I don't think they know how many different people have taken a piece of it and run with it and created a major contribution," she said. "Every time a problem came up, somebody in the community showed up to solve it."

The Governor General's Meritorious Service Medal recognizes deeds or activities that set "an example for others to follow, improves the quality of life of a community and brings benefit or honour to Canada."