Restaurant owners allege they were turned down for rent subsidy
Jan 5, 2021 8:00 AM By: Brandon Barrett 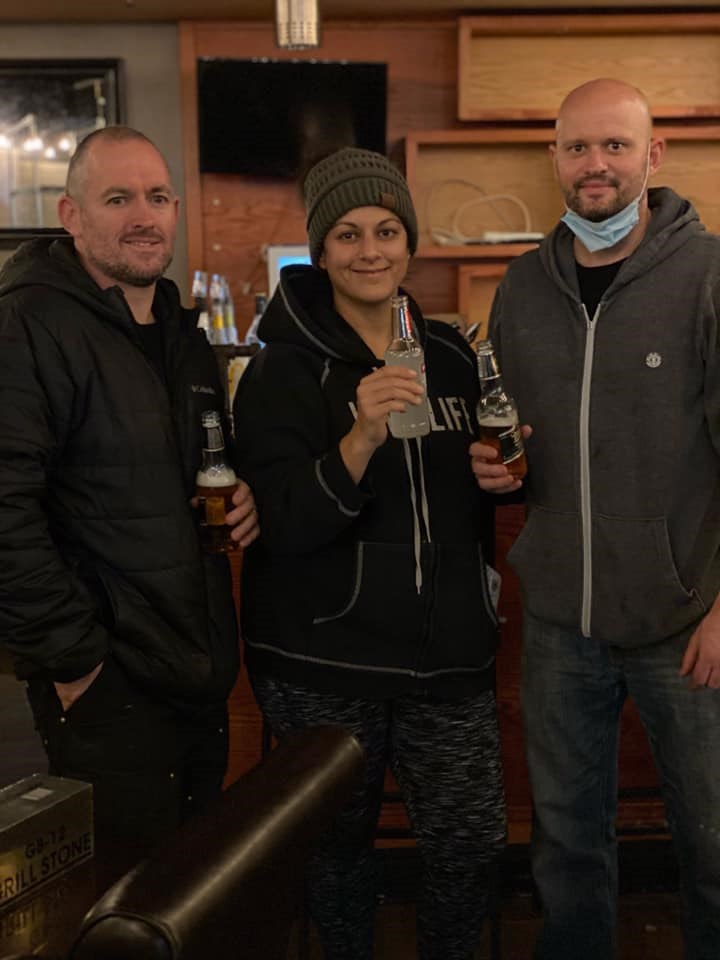 L to R: Three Below owners Alex Lewis, Priyanka Lewis and Alex Kingston in a Facebook photo announcing they were closing the restaurant after 12 years in Whistler. FACEBOOK / THREE BELOW

Imagine Cinemas, the owner-operators of Whistler’s only movie theatre, have filed a civil claim against the owners of the recently closed Three Below Restaurant for unpaid rent.

Filed Dec. 10 in B.C.’s Supreme Court, the claim is seeking $40,595 in rent arrears, covering the months from April to November 2020, as well as damages, interest, and other associated costs.

Three Below owners Alex Kingston and Priyanka and Paul Lewis are named in the suit.

Imagine Cinemas, which runs Whistler’s Village 8 Cinemas along with 11 movie theatres in Ontario, subleased the property to Three Below. The property is owned by Larco Investments.

At the onset of the pandemic, Three Below’s Priyanka Lewis said they asked Imagine Cinemas, as the leaseholder, “multiple times” to approach Larco about taking part in the Canada Emergency Commercial Rent Assistance (CECRA) program, and were initially told they were ineligible as a sub-tenant. After clarifying with the Canadian Mortgage and Housing Corporation that they were eligible, Lewis claims Imagine Cinemas informed them in late August that Larco was not going to opt in to the program.

Rick Amantea, Larco’s VP of development and community relations, told Pique that any arrangement made would have been solely between Three Below and Imagine Cinemas, the restaurant’s “de facto landlord.”

“We have no direct contractual relationship whatsoever with Three Below, and at the end of the day, whatever decision that Village 8 made, that was in their hands and not in ours,” he relayed, adding that Larco has several tenants in Whistler Village Centre that they supported through the rent subsidy program.

According to the court files, Imagine Cinemas informed Three Below on Nov. 19 that the sublease was terminated and it would be repossessing the property. A week later, Three Below announced it was permanently shuttering its doors after a dozen years in the resort, the same month, ironically enough, that Canada tweaked its commercial rent subsidy to allow for tenants to apply directly to Ottawa for rent and mortgage-payment assistance, without the need for landlord support.

“Certainly it was a little bit too late,” Priyanka Lewis said in an interview earlier this month. “Obviously now the rent subsidy has moved into the hands of the tenants, and I think if that was the case from the beginning, we would have made it at Three Below.”

Ian Tostenson, president and CEO of the BC Restaurant and Food Services Association, told Pique in a recent interview that amendments to the rent subsidy program were “wreaking havoc with the business planning cycle.

“It’s a good program, but when they changed it the way they did … it just creates more uncertainty for the business owner; that’s the problem.”

Victoria implemented a moratorium in May prohibiting commercial landlords from evicting tenants or terminating a lease, but that order was lifted Oct. 1, meaning “landlords are now free to pursue their legal remedies for any breach that occurred before or during the moratorium” unless the lease was amended by a rent reduction agreement under the CECRA program or by another other agreed-upon arrangement.

Legal experts expect more rental disputes to hit the courts as businesses contend with the economic fallout of COVID-19. In October, two Hudson’s Bay Co. landlords filed suit in Quebec court for hundreds of thousands in unpaid rent, alleging that the department store continued to operate even though it hasn’t paid its bills at multiple locations since April.

On the residential side of things, B.C. has given tenants until July 2021 to repay any rent or utilities that were owed between March 18 and Aug. 17 of this year, and introduced a repayment framework to guide both landlords and tenants. The eviction freeze for residential tenants was lifted in B.C. on Aug. 18.

None of the above claims have been proven in court.