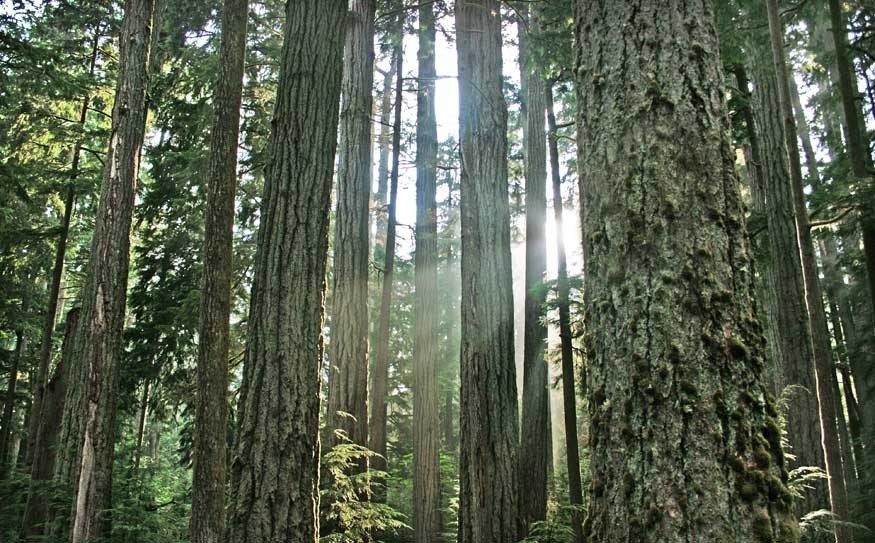 The logging of old growth remains a topic dear to the hearts of many Whistlerites, and one that dominated discussion at a recent Cheakamus Community Forest open house.File photo

The first question posed to Cheakamus Community Forest (CCF) administrators at a recent virtual open house was a good indicator of how the rest of the conversation would go.

“Why are we even talking about cutting any old growth forest areas around here?” a participant asked.

“They are priceless and should not be touched. We can do better.”

It’s not a new debate in Whistler by any stretch, but one that has taken on new life following a provincial review of B.C.’s old growth management completed last year.

As it relates to the CCF, between 30 and 55 per cent of old growth is currently protected, said board chair Jeff Fisher at the March 29 meeting.

“When the community forest was created, the idea was to reduce the logging, do a better job, go to an ecosystem based management … [and] give more weight to tourism, recreation, biodiversity, but still to harvest some timber,” Fisher said, adding that the CCF currently harvests some of its timber from old growth, and some from second growth.

“We are on a program to shift out of the old growth, but it’s a question of is it going to take 30 years, 20 years, 10 years or five years, and we are still examining options to change our harvest planning that way.”

Protecting Whistler’s old growth has long been a stated goal of Whistler Councillor Arthur De Jong, who oversees council’s environment portfolio and sits on the CCF board.

CCF management has to “first and foremost” consider the Lil’wat and Squamish First Nations, which manage the forest in partnership with the Resort Municipality of Whistler, and rely on it for jobs, De Jong said.

That said, “I would like to see the shortest time possible to get to not having to log old growth. The community's been very clear to me on that, with my environmental file … but it's complex,” he said.

The removal of some old growth has been (and will continue to be) necessary for things like ski trails and fire management, De Jong added.

“As a climate researcher, my biggest concern is that we don't burn this place down—our summer temperatures are increasing at four times the rate of winter, over two degrees Celsius in the last 40 years,” he said.

“Our forests are changing, and how do we adapt quickly enough to keep the risk down so that we don't lose a significant part of our community?”

It’s been a quiet few years for harvesting in the CCF, as sluggish timber markets have shifted the focus to fuel-management projects—though forest partners are hoping to see more harvesting completed this year.

As it relates to harvesting plans, there are 10 proposed sites in the CCF that are still targeted for tree removal: four in the Basalt Valley, two near Brandywine Creek, and one each at Callaghan Creek, Brew Creek, 16 Mile Creek and Wedgemount Creek.

The stands in question are mostly comprised of hemlock and balsam, with a small component of yellow cedar and red cedar.

Fuel-thinning projects include the ongoing work on a linear fuel break along the Cheakamus River (now nearing completion); a landscape level fuel break at 16 Mile Creek that would protect Whistler from the north; and fuel treatment behind Rainbow and Emerald.

On wildfire management, some attendees to the virtual open house wondered if there are examples of Whistler’s efforts working, and what body of science the fuel treatments are based on.

Wildfire fuel reduction treatments are relatively new in Canada and B.C., with most of the current research based on forests in the U.S., said forest manager Simon Murray.

“Do we have an example that the wildfire reduction treatments that we have done actually work? Well, no, we don't, because we haven't had a big enough fire in the Whistler Valley to test our fuel breaks,” Murray said.

“So we don't have necessarily any concrete evidence that what we've been doing is going to work, but it's the best science that we have to work with.”

To that end, environmental stewardship manager Heather Beresford noted a new study is set to be done in Whistler by UBC researcher Lori Daniels.

“She's already done quite a lot of research in the Interior on the efficacy of wildfire treatments, and now she has, in the last year, begun doing research in Coastal forests, and she has agreed to do some research specifically on a project that the RMOW has done,” Beresford said.

“So we are providing information to her this week so that she can do some analysis on the before and after of the treatments, and then compare it to what their understanding has become around what is a good project, and what are the outcomes that could be expected.”

Noting the elevated interest in discussing Whistler’s old growth, Fisher proposed a second forum be held specifically to discuss the topic—the date for this is still to be announced.