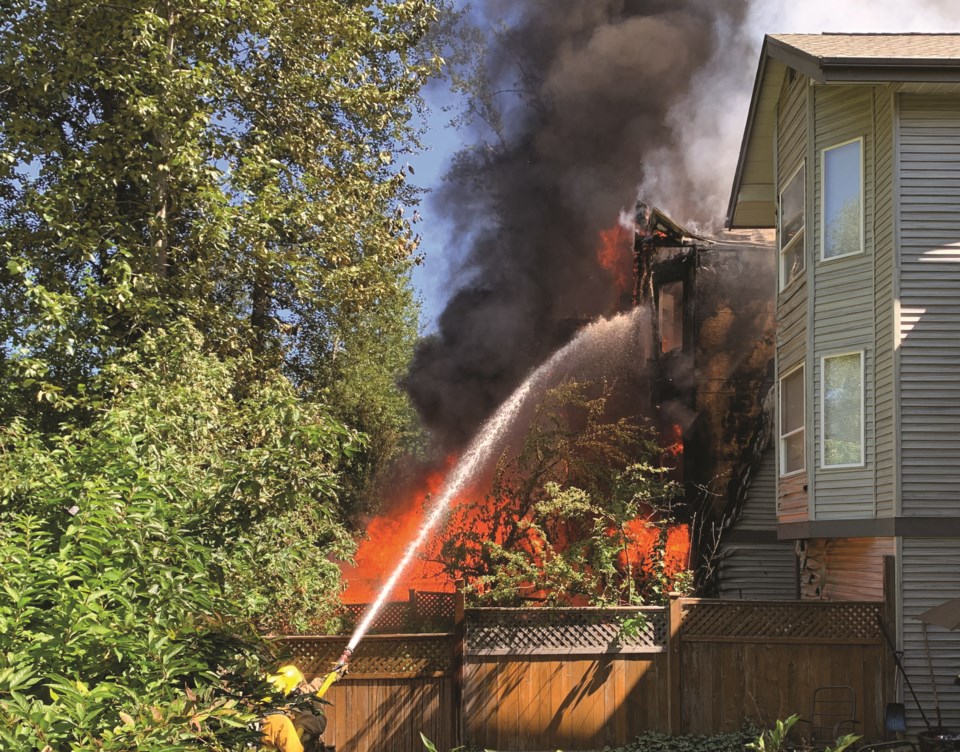 A Pemberton Fire Rescue member responds to a house fire that broke out in a townhouse complex in August 2020.Kelly Cosgrove/ Lens & Listings

Pemberton Fire Rescue attended 348 incidents in 2020, down significantly from the 459 they attended in 2019.

The drop in numbers was “due to COVID-19,” according to the Pemberton Fire Rescue annual report, which was presented to the Village of Pemberton regular council meeting July 13.

Fires represented 26 per cent of the department’s call volume with 91 total calls.

Members of Fire and Rescue spent a total of 355.5 hours responding to calls, which was also down from 2019 where they spent 452.25 hours on incidents.

The COVID-19 pandemic also affected Pemberton Fire and Rescue in a few other ways—it meant that members could not engage with the community as much they normally would and it threw some curveballs into the training schedule.

“Pemberton Fire Rescue assisted with the Halloween fireworks and conducted a Santa’s tour around town at Christmas,” said the report. “[But] the pandemic drastically reduced our involvement with the community.”

Previous to March 11, 2020, members participated in weekly training sessions, but those were put on hold for two months due to the pandemic. Training resumed in June with a modified program consisting of four training sessions a week with just four to six members attending each, in order to adhere to the COVID-19 safety regulations.

This was due to “an increase in time dedicated to the training program by the chief and deputy chief, as it was vital that the training requirements set forth by the province continued to be met while at the same time ensuring adherence to the public health orders,” according to the report.

Said fire chief Robert Grossman: “So, these additional volunteer hours are put in while maintaining full-time jobs, as well as family and other commitments.

“The dedication and commitment each member of Pemberton Fire Rescue gives to the department as well as the community is very much appreciated, and residents should be proud of the commitment these members provide.”

Over that same time span, the department had one major promotion with Cameron Adams being promoted to full-time deputy chief training and fire prevention.