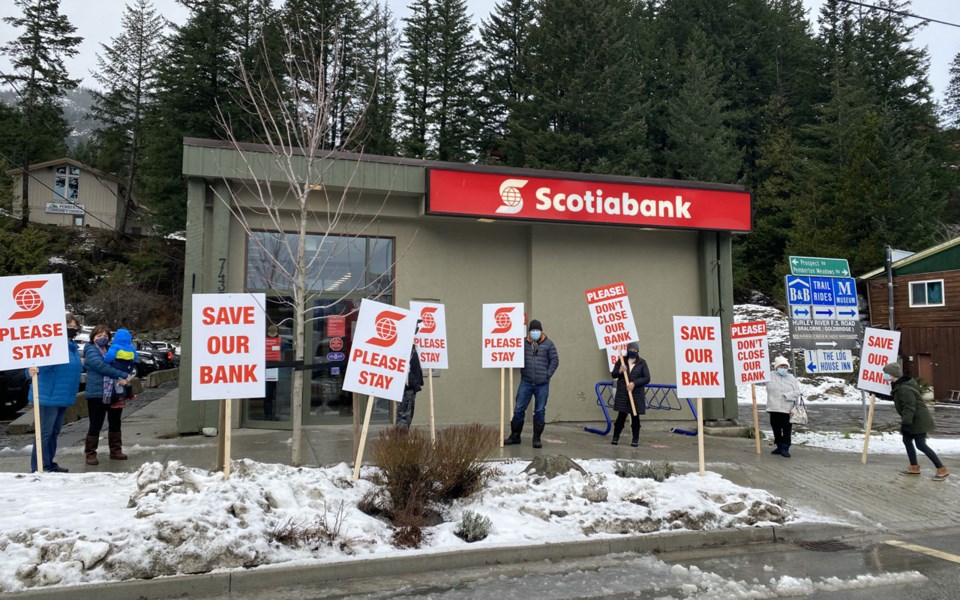 Her Scotiabank account is no longer her primary account, but Doris Peters has a strong feeling for the bank’s Pemberton branch.

Peters now resides in Vancouver, so her attachment to the bank is mostly nostalgia.

“My grandfather, on my birthday, will put money in my account,” she said. “For me, personally, it’s that ongoing connection to my community and my family.”

The client of nearly 40 years may be closing her account soon, though, as the bank plans to close its Pemberton branch in July. Peters serves as a N’Quatqua councillor and knows the community’s residents will be impacted.

“We have elders who don’t do online [banking] and our Wi-Fi is haphazard at best. When there’s a big snowstorm, our Wi-Fi goes down—if people have Wi-Fi. We don’t have that fast Wi-Fi that you have here in the city. It’s the slowest Wi-Fi you can manage,” she said.

“There are not a lot of jobs within the community and a lot of our members are on social assistance and go do their shopping in Pemberton.

“Not having the bank there is not only going to impact our members doing their personal banking, but it will impact the shops in Pemberton.”

Scotiabank spokesperson Daniela Da Silva said that as of July 15, it will relocate its services from the Prospect Street location to its Lake Placid Drive branch in Whistler. The branch’s location in Creekside is more than 30 minutes’ drive from the existing Pemberton location, tacking on more than an hour round trip for those who are already travelling an hour-and-a-half at minimum from N’Quatqua, which would further deplete the limited funds of some members.

However, Da Silva said the change will be a positive move for all.

“We did not make this decision lightly. We understand that this will have an impact on the Pemberton community,” Da Silva wrote. “We feel that this relocation will help us provide better service and greater resources to our customers in both Pemberton and Whistler.”

The local municipality has some doubts, though. During the Village of Pemberton’s (VOP) regular council meeting on Jan. 12, council voted to draft a letter to send to the bank’s head office with the municipality’s concerns while Mayor Mike Richman plans to personally call the office.

“Personally, I feel that it’s a bad move,” he said. “I feel that it was a decision made at a head office based on some numbers, looking at a town like Pemberton and saying ‘There’s 2,800, 2,900 people there. They can bank online,’ not recognizing our level of growth and activity that we have here.”

Several local residents agree with the mayor and have started a petition asking that Scotiabank reverse its decision. It had garnered more than 1,800 signatures as of Jan. 13.

The petition cites several concerns around the closure, including losing local jobs, the impact on cash flow within the community and access to services, especially for those in First Nations and other remote communities who already travel significant distances to the Pemberton branch.

Additionally, a group of residents peacefully protested outside the branch on Jan. 13.

Among those leading the local opposition is Pemberton Valley Lodge owner and general manager David MacKenzie, who has had an account with Scotiabank for 55 years and uses it as the lodge’s corporate bank.

“It’s quite important when you have a small business to have a connection to your bank, obviously,” he said. “Secondary to that, a lot of my staff bank there as well and come payday, they go to withdraw their funds, pay their bills and rent. Not having access to something like that certainly makes their life more challenging.”

Pemberton + District Chamber president Steve McCloskey, meanwhile, said the group is concerned both from the business and social perspectives, noting that several members regularly use the brick-and-mortar branch.

“There’s lots of businesses that are cashing cheques, going into the branch on a daily basis,” he said. “It’s definitely a resource that’s still used despite the fact that you can use online banking.”

McCloskey is baffled by the decision, reasoning that Pemberton and the surrounding area is growing, with $134 million in real estate traded in Pemberton in the last 12 months.

“At this moment, it doesn’t seem like anybody really knows why they’re shutting it down aside from the obvious, that they’re trying to save costs,” he said. “It just seems counterintuitive.

“It seems hard to believe that we’re not able to support a local branch.”

Another concern is the loss of corporate support in the community. McCloskey noted that the branch supported the chamber golf tournament while MacKenzie added that organizations ranging from the Rotary Club, Lions Club and food bank were all beneficiaries. Peters added that the bank also chipped in for some of N’Quatqua’s initiatives.

The company anticipates that such contributions will continue.

“Scotiabank has a long standing tradition of supporting the communities we serve, and we will continue to be a part of the Pemberton community from our Whistler branch location,” the spokesperson wrote.

The Scotiabank spokesperson could not confirm what will happen to staff members, only saying that they are aware of the decision, or whether Scotiabank will retain an ATM in the community.

While Scotiabank was the lone bank in the community, BlueShore Financial branch manager Holly Hetherington confirmed that the credit union, also located on Prospect Street, can handle a full range of financial services.

Hetherington said that since the rumours started last week, BlueShore has seen some additional interest and opened some new accounts.

“We actually have changed some staffing. We’re putting together a strategy to make sure that we’re able to handle more inquiries so people know walking in that we’re a full-service financial institution and we can take care of your needs,” she said, noting the institution employs specialists such as investment advisors, business advisors and insurance specialists who can meet with clients at the branch.

Hetherington added that BlueShore plans to be in Pemberton long term.

“We wanted to just make sure that Pemberton knows that we’ve been supporting the community there since 1998 and we are committed to the community. We are staying put,” said Hetherington, adding that BlueShore has supported mainstays such as the Pemberton Arts Council and Pemberton & District Public Library.