New initiative offers prizes for strange finds as part of ‘trash challenges’
May 8, 2021 7:00 AM By: Alyssa Noel 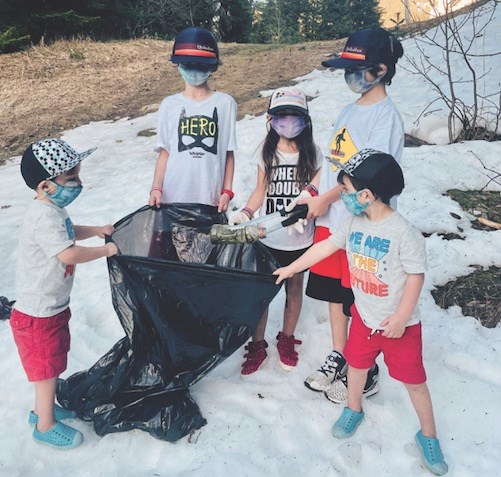 When the snow began to melt in the valley this spring, eight-year-old Micah Carsen and his siblings noticed something.

“There was lots of trash just lying around from different celebrations in the winter and it all got buried under the snow so no one dealt with it,” he said. “We started to clean up that trash, but then we noticed it was a problem all over Whistler.”

That’s when they asked their mom, Eliana Mandel-Carsen, if there were any community groups that organized trash clean-ups. The family learned about Whistler’s annual Pitch-in Day—which took place on May 1 this year—but they wanted to do more ongoing work.

So Mandel-Carsen asked around, leading to Mayor Jack Crompton connecting her to local Cathy Zeglinski. The two came up with the clean-up committee, attracting other green-minded locals along the way.

Dubbed Rid the Vid Clean Up, the initiative encourages Whistlerites to get out and pick up trash around their neighbourhoods. But there’s a twist: if they take videos or photos of items on the “trash challenges” list—things like unique items, largest piece of trash, unique trash-cleaning outfits—along with the hashtag #RidtheVidCleanUp, they could be eligible to win an array of prizes.

“I found a hat, old ladders, and tubs,” Micah said. “I also found a really, really old coin that was just laying there covered in moss. We found huge pieces of Plexiglas and four-foot-long cellophane.”

Trash pick-up doesn’t have to be an all-day endeavour. As 10-year-old Noah Carsen advised, you can easily spend five minutes cleaning up when you take your dog for a walk.

“When you’re going for a walk always bring gloves and a bag,” he said. “As you’re going around, pick up the stuff you see. Every little piece of trash that’s picked up makes a big difference.”

Already, the family has noticed their neighbourhood near the village is looking cleaner. “Even kids can make a difference,” said six-year-old Leah Carsen.

There are other perks, too. Micah said it’s been great getting outside more—and, when they clean up old food containers, they’re also removing bear and wildlife attractants from the area.

“There have been coyotes around our area and last year there were a whole bunch of bears,” he said. “Also, by cleaning up all the food garbage and garbage that has a smell, hopefully the animals will stop eating it, so they won’t be sick.”

Some other common items they’ve found? Cigarette butts, many face masks and “I also found a lot of fireworks,” Leah said. (Mandel-Carsen estimates they turned up the remnants of about 100 of those.)

Meanwhile, the family is also counting the bottles and single-serve cups they pick up to tally for the Million Dollar Bottle Challenge, led by a Coquitlam man who recently ran up the Sea to Sky Highway picking up trash.

“People seem to be excited by it,” Mandel-Carsen said. “It’s nice for people to have a fun place to share and the hashtag ties it all together. It helps to unite the community in a COVID-safe way.”

For more—or to send in your videos and photos—visit Facebook and search “Rid the Vid-Clean Up” or email ridthevidbc@gmail.com before May 31.