Kennel owner says video shows operations out of context and invites people to come for a kennel tour
Feb 20, 2021 11:01 AM By: Alyssa Noel 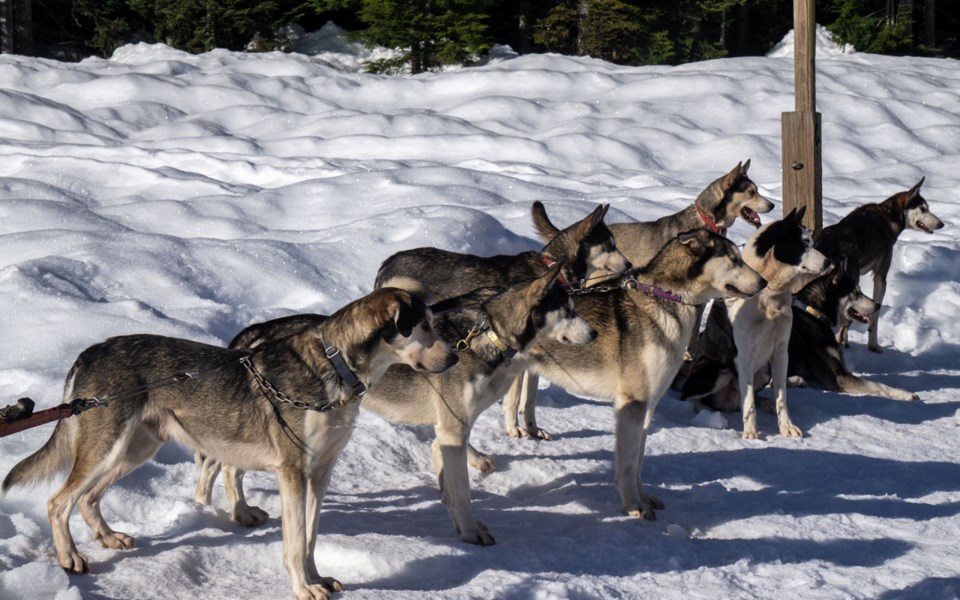 The Vancouver Humane Society (VHS) released a video on Friday, Feb. 19, of a Whistler dog sled kennel that it alleged showed dogs in distress in cages and tethered to poles.

Captured by animal advocates and turned over to the society, it shows Blackcomb Dogsled operations with some dogs pacing back and forth in enclosures and others running around poles they’re tethered to.

While nothing in the drone video is illegal, VHS said it supports its campaign to have the B.C. government update its Sled Dog Standards of Care Regulation to conform to the Canadian Veterinary Medical Association’s (CVMA) Code of Practice for Canadian Kennel Operations.

“We think what’s shown in the video is common throughout the industry and other dog sled operations,” says Peter Fricker, projects and communications manager for VHS. “There is nothing illegal about what’s being shown and it’s not necessarily contravening the BC Sled Dogs Standards of Care regulation put in place in 2012. They still allow tethering 23 hours a day. They still allow operators to shoot surplus dogs. We’re concerned about the regulations and think they need updating.”

Said Jaime Hargreaves, who owns the kennel called Trapper’s Run and is contracted to Blackcomb Dogsled, of the drone footage: “It’s totally out of context.

“I sell kennel tours. My doors are always open. Come in and chat with us; don’t take drone footage [at face value]. You can tell they’re trying to pick the worst possible shot they can get. It doesn’t look great. It’s not a great representation of my kennel.”

In the video, Fricker said it appears the dogs in enclosures are displaying “stereotypic behaviour,” which is a repetitive action that indicates psychological suffering.

“It’s a sign of frustration, boredom,” he added. “Same with dogs going around and around the post.”

Hargreaves, however, said the dogs that are pacing in the video are doing so because there are other dogs playing next to them, not because they’re distressed.

“The video is horrible,” she said. “They make it look horrible. I actually remember the day the drone was there … A bunch of us were looking at this drone and I was going to try to catch them and invite them to look at the kennels, to see what it looks like. They’re not getting the full picture.”

As for tethering, Hargreaves said only about five per cent of her 85 dogs are tethered as a tool.

“I don’t need to have tethers at all,” she said. “I know dogs, this is what I do. They work well for me. They’re a great training tool. I could be fine with no tethers tomorrow … I stand behind animal rights. So if people aren’t doing a good job and the animals aren’t happy and cared for, then yes, I believe shut them down. But be educated. That is not this company. We’re leading the industry and we’ve never changed.”

Meanwhile, VHS has launched a petition aimed at Minister of Agriculture Lana Popham as part of its campaign to have regulations updated.

Under the CVMA code that the society would like to see all B.C. kennels adhere to, no tethering is not allowed. It also requires dogs to be housed in a way that allows them to “display natural behaviours, to socialize with or without other species of animals and humans, as appropriate, and to protect public safety.”

More on the VHS campaign can be found at vancouverhumanesociety.bc.ca/posts/sled-dog-care-standards.

For her part, Hargreaves reiterates her door is open for public tours off Callaghan Valley Road. “I have a flag at the end of the road saying, ‘Come in. Kennel Tours,’” she said. “If you’re going to have an opinion, have an informed opinion.”

(Editor's note: the photo for this story was changed on Feb. 22 to more accurately reflect location.)