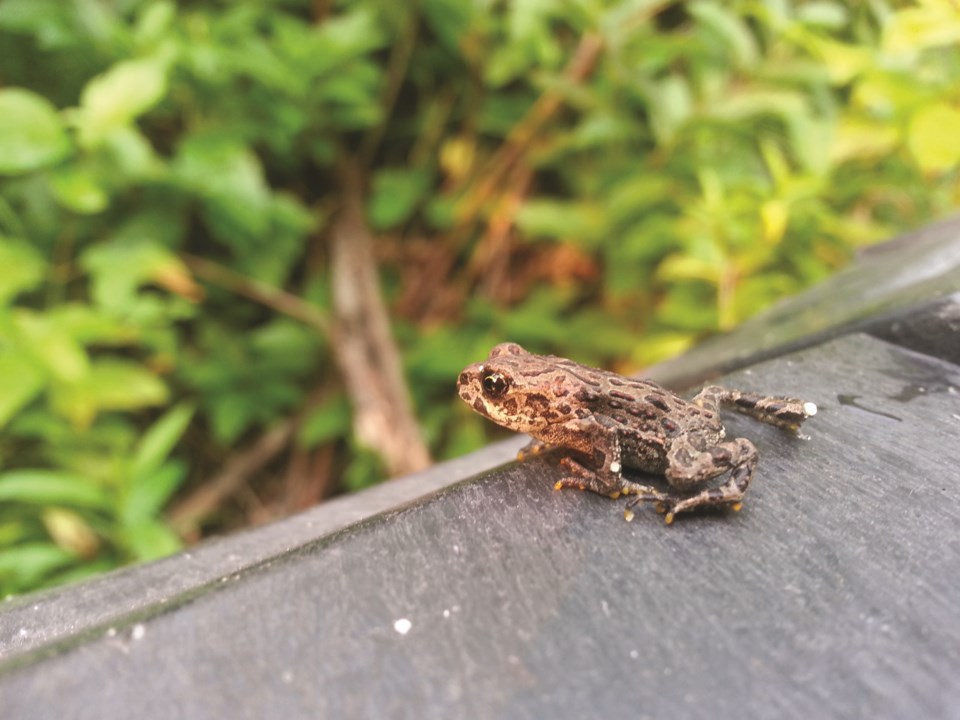 Whistler’s tiny Western toads are set to make the leap to the forest surrounding Lost Lake in the coming weeks. File photo

Tens of thousands of tiny toadlets have begun the annual great Western Toad Migration, which sees them travel from the shores of Lost Lake into the surrounding forest.

Because Western Toads are both a species of special concern and can be very sensitive to changes in their environment, the Resort Municipality of Whistler (RMOW) takes a series of precautions to help protect the vulnerable creatures, including closing portions of Lost Lake Park during the migration, the municipality said in a release.

Beginning on Sunday, July 18, 2021 the Lost Lake access road and parking lot will be closed to all vehicle and pedestrian traffic. Visitors can still walk or bike into Lost Lake along the Valley Trail or Lost Lake Loop Trail to view the migration and learn more about Western Toads from onsite Naturalists. The Whistler Bike Valet will be offering free, secure bicycle parking at Lost Lake every Friday through Sunday during the summer months.

The free Lost Lake Shuttle will continue to run with minor changes—visitors will now be dropped off at the entrance to Lost Lake Park on Blackcomb Way. From there, visitors can walk 400 meters down the Valley Trail to reach the park lawns and beach.

For now, the beach, lawn areas and docks remain open, but all visitors are asked to look down as they walk and ride in the area—the toadlets are no bigger than the size of a dime and can be easily crushed underfoot during the month-long migration.

The RMOW operates a bio-monitoring program focusing on indicator species—those studied to provide insight on the greater health of the ecosystem. Lost Lake’s Western Toad population has been monitored as part of this study for the past 13 years.

Ten years ago, the RMOW began installing both permanent and temporary measures at Lost Lake Park to help protect this population.

Last year, the municipality built the toadlets their own tunnel as way of protecting the migrating amphibians. This past spring, a second underpass was installed under the Lost Lake Loop Trail, between the Lost Lake Beach and Barking Bay. A new log retaining wall along Lost Lake beach has also been placed in the hope of discouraging toads from migrating onto park lawn areas where historic mortality numbers have been very high.

This year, 102 breeding pairs of Western Toads were observed in Lost Lake. Each female lays an average of 12,000 eggs resulting in the emergence of hundreds of thousands of tadpoles, which quickly group together forming large black clouds along the shoreline of Lost Lake.

By July and August, tadpoles have metamorphosed into tiny toadlets and are ready for the great migration from lake to forest. This migration can often appear as a moving carpet, as tens of thousands of dime-sized toadlets make their way across Lost Lake Park.