Quartz-Chromatic features acrylic gradient of warm to cool tones washing over local plants and animals
Jul 12, 2021 9:00 AM By: Brandon Barrett 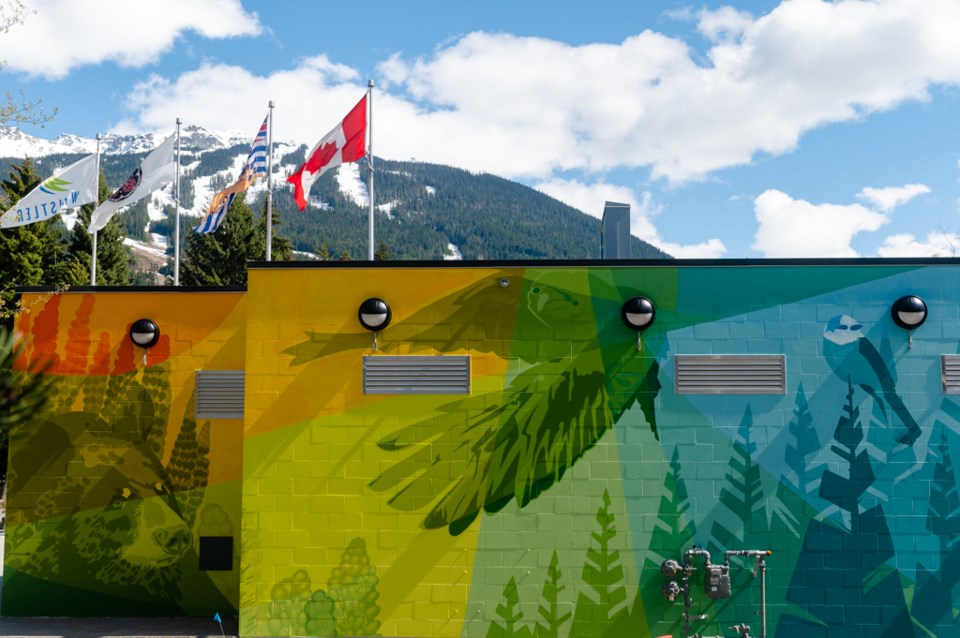 The multi-coloured piece stands more than four metres tall and spans all three sections of the backside of the building. Entitled Quartz-Chromatic, it is based on the ways quartz, a mineral found around the Sea to Sky, reflects and disperses light, and features an acrylic gradient of warm to cool tones washing over different plants and animals from the area, such as the black bear, lynx, raven, Douglas fir, hemlock and lupine flowers.

“I was thrilled, honoured and grateful to be the artist chosen to paint the mural at Whistler Olympic Plaza. The mural creation process, from conception to finished painting, went so smooth and natural,” Petko said in a release.

“As an artist working alone during the pandemic on a public art piece, it was nice to have the community come out, observe me paint and comment on how lovely the piece was looking. Many were amazed at the progress I made in such a short period of time. Being an avid forager and nature lover, I have spent countless hours in the forests of Whistler and have had encounters with all of the animals I have included in the mural.”

The owner of Black Ohm Tattoos, Petko has been a part of Whistler’s art scene since 1995, when he moved here from Ontario and began working at Toad Hall Studios and the tattoo shop. An avid drawer and painter, Petko is a member of the art collective The GuildArts and has a solo exhibit slated to open in early 2022.

Petko’s mural was selected by a jury of local art representatives as part of a municipal request for proposals in February. The piece was funded through the province’s Resort Municipality Initiative fund.

Check out the mural as part of the RMOW’s virtual art tour at whistler.ca/tour/160.