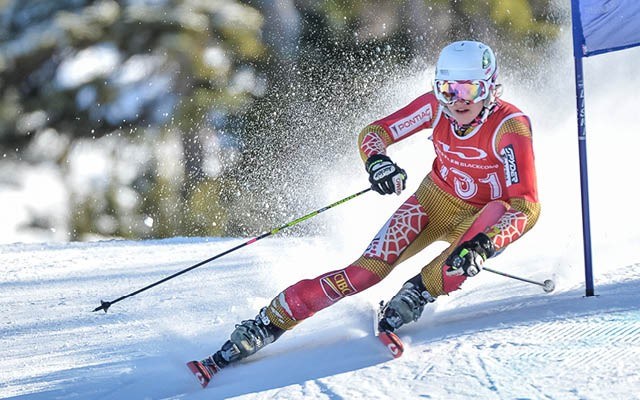 Back to Back Julia Murray skis to the fastest women's Peak to Valley time on Jan. 31, helping her Capital Home Energy team to a repeat victory in the 30th annual race. photo by scott brammer / <a href="http://www.coastphoto.com/">www.coastphoto.com</a>

With the 30th edition of the Peak to Valley Race wrapping up over the weekend, there's really no debate that it's among one of Whistler's most cherished winter traditions.

But there's a new annual tradition forming at the world's longest giant slalom, one that sees the daughter of the event's visionaries taking the title.

"We definitely felt the pressure," laughed Murray, who also had the quickest individual women's time during the two-day race held Jan. 31 and Feb. 1. "It was a lot of fun, though.

"It was perfect racing conditions. I can't believe how well it held up... It brought me back to my racing years when I slapped on the spandex," added the 2010 Olympian. "You could actually let it go and just hope that your legs held on at the bottom."

Murray's parents, Stephanie Sloan and the late Dave Murray, came up with the idea for the Peak to Valley decades ago, envisioning a race from the Whistler alpine down to the Creekside base. Based on the turnout of more than 75 co-ed teams of four for the 30th annual race, it's an event that still holds a very special place in the hearts of Whistler skiers.

"It's really awesome to be a part of something that my dad and mom started so long ago," said Murray, who spent several seasons on the Canadian ski cross team alongside Barr. "It's one of the few true Whistler competitions that is still around.

"Seeing all the local people still being involved with it and re-connecting with the community almost. It's so cool to hear stories from everyone else about my dad, because it brings back memories for them. That's really neat."

This year's Peak to Valley was one of the fastest on record. Last year, Barr was the first skier in well over a decade to post a time under five minutes on a full-length course. Barr repeated that feat again on the weekend, but Oughtred, Hume and Rey also beat the five-minute mark this year, too, on the 5.6-kilometre, 165-gate run.

The cold, hard conditions that greeted racers on both Friday and Saturday certainly played a role in that, said "Queen of the Peak to Valley" Cate Webster from Whistler Blackcomb's events department.

"The snow was super fast, and there were even sections of the course that were in such good shape after the 154 racers on Friday that we actually didn't even go in and groom," said Webster. "When it's that perfect, you just leave it, and it was great the next day."

But for most racers, it's less about the time they post and more about the experience. And with this year marking a milestone moment for the Peak to Valley, it was a chance for many involved with the event to look back fondly on all 30 editions of the race.

"It brought back lots of different memories of different races that we've had," said Webster. "All of that stuff is fun to re-live."

The Peak to Valley blanket, made up of T-shirts commemorating several years of the race, is still up for auction at www.ebay.ca/itm/171230732299, with proceeds going to the Whistler Museum.

Full results are posted at www.whistlerblackcomb.com/events.