Overall registration numbers are slightly down for the 2013 edition of the Whistler 5 Peaks trail running series, but given that the event happens this Saturday, Aug.
Aug 21, 2013 9:00 PM By: Andrew Mitchell 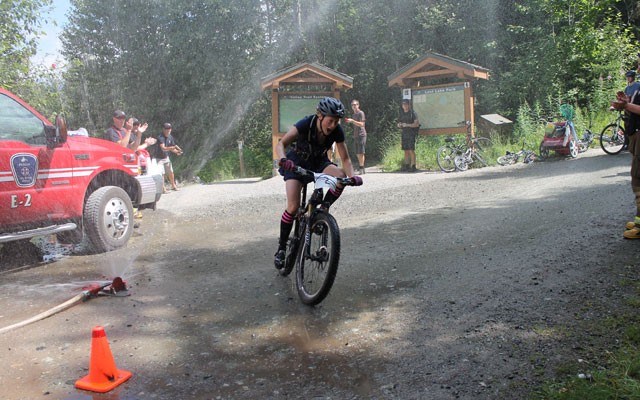 Sylvie Allen in the Charlie's Angels women race in 2012

Overall registration numbers are slightly down for the 2013 edition of the Whistler 5 Peaks trail running series, but given that the event happens this Saturday, Aug. 24 — less than 24 hours before the start of Ironman Canada — it's nothing race director Chris Colpitts didn't expect.

"It's something we knew would have an impact going into this, so we're not too concerned with our numbers this year," he said. "It's so busy here in August that it was tough to find a different time slot to fit it in, but that won't be as big an issue next year."

Colpitts is also expecting a last minute boost to the race as friends and family members of Ironman athletes learn about the race. "We're assuming race day registration will be good with all the support crews that are here for Ironman, and all the wives and husbands that might want to get a race of their own in before the big day."

The course will be the same as the last few years, following low alpine trails around Blackcomb Mountain. The enduro course is 10.6km and includes the Alpine Walk and Overlord Trail, up to Blackcomb Lake via Lakeside Loop, back along Marmot trail to 7th Heaven Road and another loop up and around before returning to the start along the Alpine Walk.

The sport course is shorter at 6.4 km, and doesn't include the loop out Decker. Course maps are online at www.5peaks.com.

"There's a lot of vertical, but it's a nice, scenic trail," said Colpitts. "This is the only race (in the series) that allows you to run a little shorter distance but get up into the high alpine and start there rather than having to climb up there. To have lift access (via Whistler Village Gondola and Peak 2 Peak Gondola) is an amazing opportunity for people."

The race includes a lot of local and Lower Mainland runners, but there are a few runners that are coming from as far away as New York to take part.

Pre-registration is available on Friday night at the Salomon Store, from 5 p.m. to 8 p.m. The store will open again at 8 a.m. on race day, and will offer registration until 9:15 a.m.

Women's only enduro race to raise money for women's centre

The third annual WORCA women's only race takes place this Saturday, Aug. 24 with an 11 a.m. start in the Whistler Interpretive Forest.

The theme for this year's event is "The Battle for Bond," and participants are encouraged to dress up as women from James Bond movies for the race. The 2012 event followed a Charlie's Angels theme and the inaugural race in 2011 was Betty vs. Veronica.

The theme isn't the only thing that's different this year. Past races have been two-stage races with a downhill leg followed by a cross-country race, while this year's event is an enduro with five timed stages. In between stages riders stick together and socialize.

The timed descents are Tunnel Vision, Big Timber, southbound on Lower Sproat to Three Birds and left on Middle Danimal, 99er back to the junction of Middle Danimal and then Danimal North to finish.

The course changed as a result of a private land access issue, prompting organizers to switch up the third and fourth stages. The total length and level of difficulty is roughly the same.

There are still a few spots left in the event, with a $50 race entry fee at www.worca.com. That includes a ticket to the Casino Royale afterparty at the Fairmont Chateau Whistler.

All proceeds from the race and after-party — which includes a funny money casino and auction — go towards the Howe Sound Women's Centre, which provides assistance to young mothers and young families in Whistler and Squamish, and shelter services for women and children.

For more on the race or registration, visit www.worca.com.