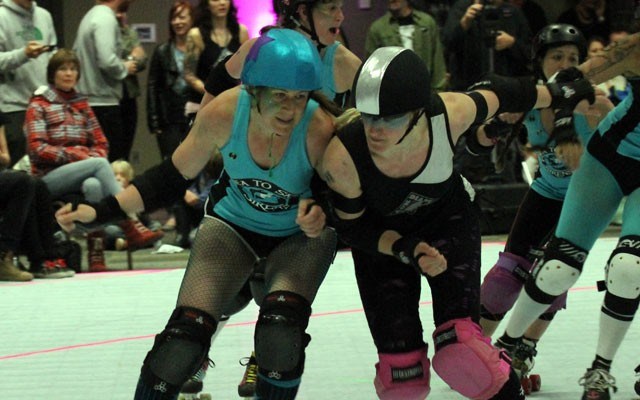 ROLLING ON Whistler and Squamish will team up on the track to battle the Brick House Betties from Comox in roller derby action on Saturday. File photo by Dan Falloon

One important part of roller derby is to be able to take it as well as you can dish it out.

But the Whistler and Squamish squads have mastered the give-and-take off the track as well.

Having gotten its start earlier, Squamish's Sirens serve as the big sister in the relationship, helping Whistler's Black Diamond Betties get their start with practices, coaching and testing.

"Squamish helped us quite a lot," Whistler's Alison Kemp (a.k..a Gold E. Blocks) said. "This was a great chance for us to return the favour.

"Our very first year, we had no venue to bout in, so Squamish co-hosted with us in their bout."

This year, though, it's the Sirens who don't have a venue to host a bout. Brennan Park Sports Centre's rink is undergoing a resurfacing this summer when the ice is removed, so Whistler's team reached out and offered a co-hosting opportunity. Kemp noted that as bouts are a team's major fundraiser for the year, losing out on one can hurt a team's coffers, so the two organizations will split the proceeds, just like they did when the Betties were starting out.

Squamish's Shannon Handley (a.k.a. Mala Justed) said the chance to team up was enticing, not just for financial reasons but for competitive ones as well.

"We have a rivalry on the track but we've always gotten along off the track," she said. "We're really hoping to amp it up this year, combine our skills and talent in creating this team."

Every ounce of that talent will be needed as the newly minted Apex Pistols will welcome the Comox-based Brick House Betties this Saturday in Splatterday Night Fever at the Whistler Conference Centre. Doors open at 5 p.m. with action getting underway at 6 p.m. Tickets are available at wssf.com starting at $15.

Since players from both sides of the team have experienced similar coaching, Handley, who expects the team to return to Brennan Park when the renovations are complete, said it hasn't been challenging getting the girls on the same page strategically.

"We play at the same level. We've been established around the same amount of time," she said. "We're definitely meshing really well on the track. It feels great to work with these girls... To get to work alongside them and skate alongside them has been really cool."

Kemp said the original plan was to have a roster that was evenly split between Whistler and Squamish players, but a couple of Whistler injuries have necessitated fill-ins from the Squamish side. Whistler's newer players have played in other away bouts this year and will be given other opportunities in the future.

Kemp added the two sides are also planning to bring some Sunshine Coast players in for future bouts to boost the all-star level even more.

"The level of play is going up and a lot of small teams are starting to band together to create veteran or all-star additions to their league as well as their own talent for recreation or fresh meat," she said. "We thought this would be a great way to bring (Squamish) on-board and get them to see a different side of participating in the Ski and Snowboard Festival and being on the same side of the track."

The Comox side is undefeated, and creating a veterans-only team will give the corridor a fighting chance against their Vancouver Island rivals. Handley praised the Brick House roster, noting their entire lineup is solid and will keep on charging at the home crew.

"They've managed to hold onto a lot of their players who have been there from the beginning. They've got a lot of depth. They've got a lot of experience. They're very physical, very hard-hitting, pretty relentless that way," she said. "They've got the stamina and the power to apply themselves for an entire game. We're hoping to be able to match and maybe better that."