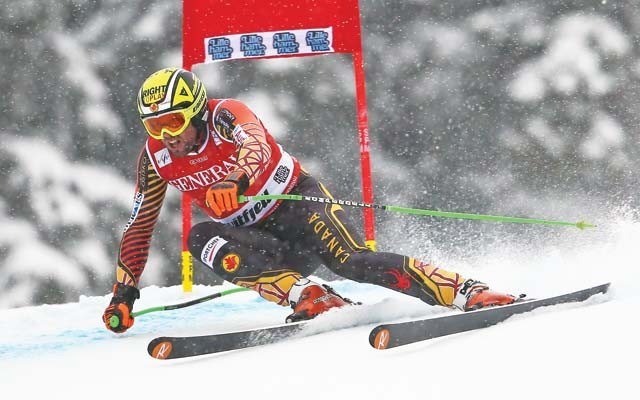 Manny Osborne-Paradis acknowledges he's in a different position than some of the other Whistler Mountain Ski Club alumni getting ready for the FIS alpine season.

The 32-year-old is one of the elder statesmen on the Alpine Canada Alpin squad and took a bit of a different approach to training this summer, working with an Italy-based trainer to stay limber for the fast-approaching season.

As a result, he's feeling as good as he has entering a season in years, he said.

"It's nothing against the training they have here but their focus is definitely more on the developmental side for younger athletes and as I get older, I need just a little bit more one-on-one," he said. "We're really trying to stay strong and not feel really crappy every morning when you wake up. It's a lot more physio and stretching and yoga so you know that the muscle memory is there."

Another change Osborne-Paradis made was to his equipment. After years on Rossignol, he switched to Head after observing the way "heavier guys" are able to control them a little more effectively.

It's early days, but Osborne-Paradis feels like he can do some damage when the season starts later this month in Lake Louise, Alta.

"I'll see how I can do in the first three or four races to benchmark what I need to work on in races with this new equipment," said Osborne-Paradis, who posted a best finish of fourth in downhill in Kvitfjell, Norway last season. "I can't put my finger on it. We're talking about tenths and hundredths of a second here, but there are differences.

The new details have given Osborne-Paradis a big shot in the arm coming into the year with an eye toward World Championships in St. Moritz at the end of it all, noting he loves the course.

A new rush of younger skiers who came up through the Whistler Mountain Ski Club will also suit up for the squad this season.

Whistler-raised Broderick Thompson will enjoy a little different feeling in his second full year on the team.

After skiing plenty at camps in Zermatt, Switzerland and Kitzbuhel, Austria, the 22-year-old is raring to make a step forward after reinforcing his approach.

"I had a lot of volume this summer on my skis so I'm feeling pretty confident in my abilities right now," he said. "I was figuring out my body position and making it more consistent. I was having a strong starting platform (solidifying a base to push more after the speed builds). Then I was trying to find that race line and trying to be more consistent with that."

Thompson hit the top 30 a couple times in Alpine combined last season and hopes to find himself there more regularly in 2016-17.

"I can go out there and make a name for myself on the tour now, trying to be more consistent," he said.

Like Thompson, Jack Crawford is returning to the team for a second year. The 19-year-old took a second-place finish in super-G at the Junior World Ski Championships in Russia last spring and hoped to use that result as a springboard into this campaign. However, a string of poor luck hampered him, as a road biking crash set of a chain of events that left him with a broken wrist and a broken arm requiring surgery.

Crawford missed the Swiss camp but returned to get time on snow in Austria. Though he wasn't able to do his sport-specific training in the summer, Crawford was still able to keep fit and, admittedly, didn't mind a little time away.

"The couple months off skiing, I consider it a good thing. It got my mind off of what it was always on, so it gave me a nice little break," he said. "Now that I'm actually back into it, I'm fully invested. I'm not hating what I'm doing. I'm really enjoying what I'm doing because I had that time off."

Crawford is entering this season hoping to win the NorAm Cup title, for starters, before aiming for big things at his second World Juniors.

"This year, we're a year older so a couple of those guys who were a little older and, I don't want to say better skiers but have a few more races under their belt, won't be there," he said.

Lastly, Brodie Seger will be the WMSC rookie on the team this year. Though the 20-year-old is still waiting to make his World Cup debut, he's pushing to receive consideration if there's a situation where he might be able to race. Seger said he worked on the mental side of his skiing this summer in addition to his physical skills.

"I was working on some really technical stuff like really maintaining a strong position and moving in a strong way to establish the platform at the start of the turn," he said. "But the biggest thing I was working on this summer was more on the mental side of things, working on my approach a little bit to each run and my focus in general, just to make sure that I can execute exactly the way I want on race day."

That approach, Seger said, will hopefully help him with his first runs of the day where he can set himself to hit the NorAm Cup podium.

"The biggest part had to do with confidence and commitment to my plan that I make in inspection. It's extremely relevant to race day because you have to come out of the race first run and execute it perfectly. You only have one chance to do everything you need to," he said.