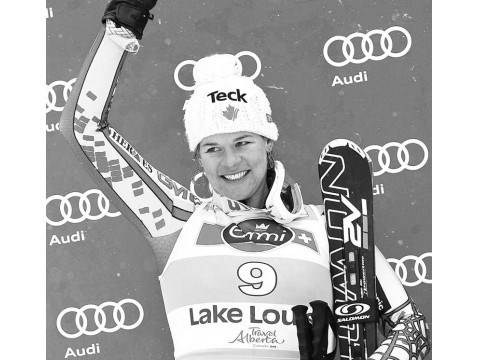 Alpine Canada added three additional names to the Olympic roster last week after their quota was increased to the maximum of 22 athletes.

The spots were made available by the International Ski Federation on Friday, Jan. 29 after going through results and other international quotas. Any spots that were still available at the deadline were redistributed to nations based on results.

The list of athletes includes Georgia Simmerlin of West Vancouver, a member of the national development team, Marie-Pier Prefontaine of Quebec and Patrick Biggs of Ontario.

Meanwhile, the World Cup season continued through the weekend before breaking for the Games.

Shona Rubens earned the best result of her career last Friday with a 10 th place finish in the super combined competition at St. Moritz, Switzerland. It was the first time that Rubens had finished in the top 10.

Rubens had a disappointing run in the super G to place 22 nd , but managed to climb 12 spots after posting the fifth-fastest giant slalom run of the day in the afternoon.

"To be honest, I was really excited to be selected for the Olympics (earlier in the week) but at the same time I wanted to go based on my results," she said. "Knowing that I was going I wanted to use today's race to prove to everyone, and even myself, that I belong (at the Olympics).

Brydon was the top Canadian in the following day's downhill, finishing 20 th . The field was smaller with some athletes opting to skip the event and the possibility of being injured so close to the Games. American Lindsey Vonn and Whistler's Britt Janyk were two of the skiers who withdrew.

Vonn was back in the field for the super G on Sunday, winning the event and the overall title. Emily Brydon bumped her way back up into ninth place and Shona Rubens was 18 th .

The men's technical team took part in events at Kransjka Gora, Slovenia over the weekend, two giant slalom races and a slalom.

No Canadians finished in the top three in either giant slalom event, but Whistler's Mike Janyk managed a solid 10 th place finish in the slalom. He was the only Canadian to finish two runs on the challenging course.

Typically Janyk has started slow and jumped up the rankings with a strong second run, but it was the opposite in Slovenia. He was fourth after the first run and then dropped back after getting caught up in some ruts on his second run.

"It was a difficult position to be in because the conditions were a bit rough and I got caught in some ruts a couple of times, but I definitely felt confident going in," said Janyk. "My second run was obviously not my best run.