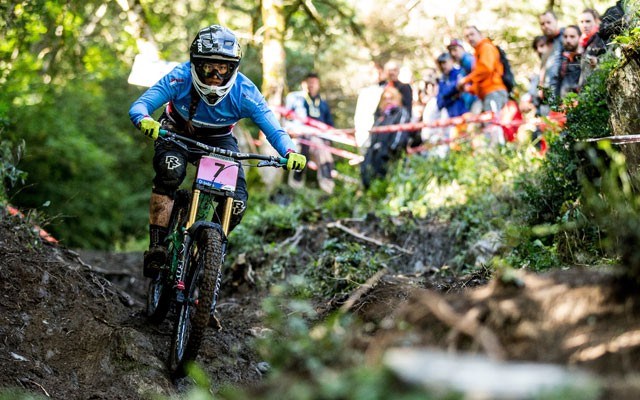 adoring andorra Georgia Astle is shown during her finals run at the UCI Mountain Bike and Trials World Championships in Vallnord, Andorra. photo by Sven Martin

But with some frustrations experienced at her first time on the world stage, there is room for growth for the 18 year old.

Reached by email in Europe, where she is preparing for the final two Enduro World Series races of the season, Astle explained there was one trouble spot on the course she never quite got down.

"I was having a lot of trouble the whole week on this one really dumb bridge," she wrote.

"It was in one of the steep muddy sections and dropped off into a compression mud pit. I came off of my bike there in both my seeding and race runs. It was really frustrating every run leading up to that bridge, in most of my practice runs someone in front would crash there and I would have to put a foot down and stop, making it really hard to clean it.

"I still have so much to work on at races. It's still new to me and even more difficult with limited practice time at World Class races."

In a follow-up, Astle noted some riders had more sponsorship and high-level experience than her. She'll have more gusto entering similar competitions going foward.

"With more training hours on and off the bike, I will be able to go into these events with more confidence," she wrote.

Throughout the training period, riders were forced to deal with challenging situations, as conditions changed regularly due to weather. However, once race day came, Astle noted things seemed to settle in, which allowed her and the others to perform.

"The first day we saw the track on the walk it was steep and dusty," she explained.

"That night there was a huge thunderstorm that left the track with slick roots in the top section and thick mud through the steep chutes.

"For our first training laps there was carnage along the tape in the steep parts and people sliding down the chutes. But eventually some pretty hefty ruts were made so it wasn't as hard to spot the main line."

Astle noted the experience of racing while surrounded by the top riders in the world was "humbling" and she's looking forward to racing in the Enduro World Series (EWS) events in Spain and Italy from Sept. 25 through 27 and Oct. 3 and 4, respectively.

"The enduros will give me a good break from my downhill bike before I come back for closing weekend in the (Whistler Mountain Bike Park)," she explained.

"I haven't raced an EWS since Crankworx 2014. I'm not expecting too much considering my trail bike has only been ridden in the bike park this season, but I'm really excited to ride and see how I can do against the best!"

As for the elite women in Andorra, Squamish's Miranda Miller hit the top 10, placing 37 seconds back of winner Rachel Atherton of Great Britain to place eighth. Whistler's Claire Buchar, meanwhile, was 14th in the field of 31.