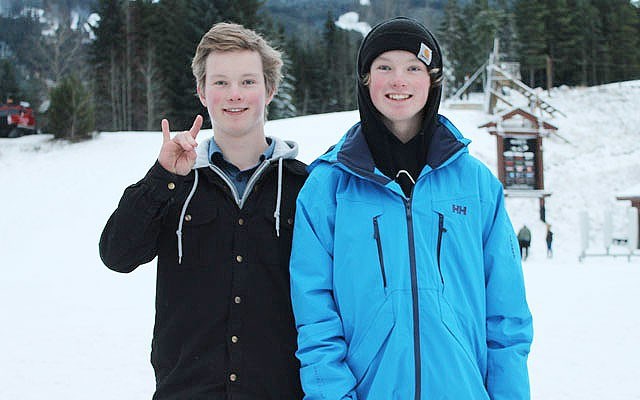 OFF TO ANDORRA, HOPEFULLY Local freeskiers Cooper and Jackson Bathgate are fundraising to head off to the Freeride Junior World Championships 2015 in Grandvalira, Andorra in February. PHOTO BY DAN FALLOON

That was essentially what Cooper and Jackson Bathgate were told late last month.

Thankfully, the 16-year-olds weren't being asked to hand over a ransom. Instead, the boys found out they'd been invited to the 2015 Freeride Junior World Championships. The Bathgates, along with West Vancouver's Liam Peiffer, were the only three Canadians invited to attend the competition, slated for Feb. 7 in Grandvalira, Andorra.

The Bathgates have started up a MakeAChamp.com campaign at makeachamp.com/jacksonbathgate, and as of Dec. 16, the campaign had raised nearly three-quarters of its $4,800 goal, thanks in large part to a $2,000 donation from a family friend.

"We didn't really know how much it would cost. We didn't really put much thought into it," Cooper said. "But when we started planning things and saw how expensive it was going to be, we needed to do something to help get to Europe."

The pair, along with coaches, sponsors, and family members, scrambled to put the pitch together after officially being invited late last month, putting together prizes from Smith Optics for those who chip in.

According to the championship website, those invited to attend were determined by 2014 results. The International Freeskiers and Snowboarders Association was responsible for determining which athletes from the United States, Canada and South America would be asked to come out.

"It was a relief, because we saw it was happening about a month before we received the official invitation," Cooper said. "We sort of knew that we might be invited, but we couldn't 100 per cent make plans around it because we weren't sure."

Said Jackson: "We thought they were going to take 20 to 30 Canadians over there, but they only ended up taking three."

The brothers said they had fairly different paths to qualification. Cooper was boosted by a bronze-medal showing at the IFSA North American Championship in Snowbird, Utah. Overall, Cooper, Jackson, and Peiffer were ranked second through fourth, respectively, in Canada's 15 to 18 age group at year's end, as Fernie's Patrick Hughes took the title.

"I had some pretty decent finishes and I crashed out at a few competitions," said Jackson.

In Andorra, the skiers won't be able to take any training runs and will only be able to complete a visual inspection. Jackson has observed the course is a steeper one than they're used to on this side of the pond, but the boys expect they'll be able to handle it.

"We definitely both want to be on the podium because we think we're capable," Cooper said.

The twins said they weren't able to ski this summer, but since the bulk of what they would have been able to do was park skiing, they don't feel like they missed out on all that much.

"This summer we didn't get to train because we didn't have the money to get up on the glacier," Cooper said. "We biked and did some dryland."

But added Jackson, "I think it helped out not skiing park so much."