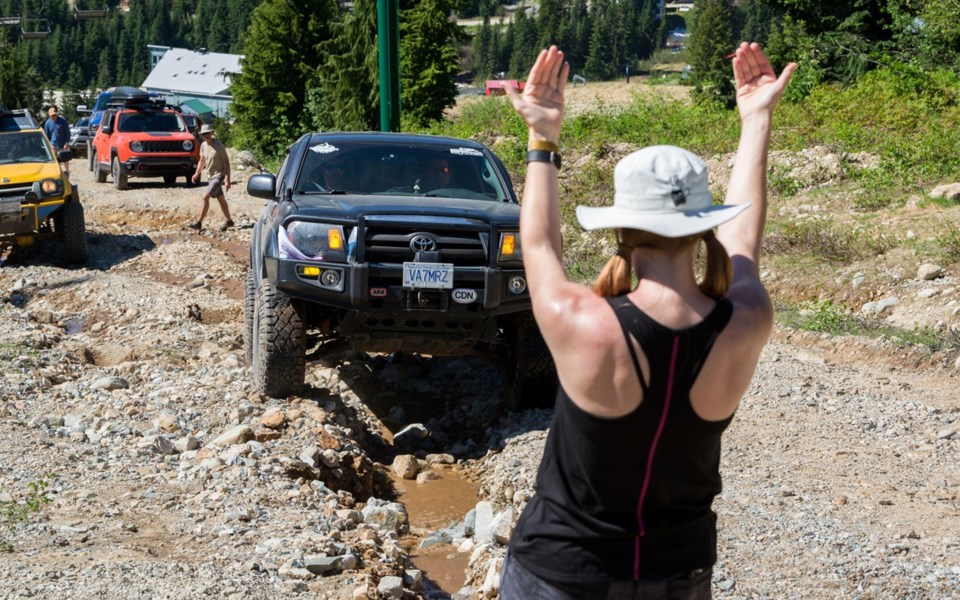 OVER IT The BC Overland Rally is coming to Whistler Olympic Park from June 27 to 30. <ParaStyle:CUTLINE\:CUTLINE Credit>Photo by Bryon Dorr

If you travel, BC Overland Rally organizer Ray Hyland hopes you can have a real adventure.

Take, for example, a recent foray that Hyland and his family went on that started when he restored a 1954 Land Rover that he found in a field near Revelstoke and bought for $300. After adding doors and windows, fixing the engine and installing seatbelts, he had the vehicle shipped to London. From there, he and his family drove to Singapore over the course of nine months.

"It broke down every single day, but it was an adventure, and that's what we're trying to share with these rallies. We're trying to give people not only the tools, but also the comfort level to say, 'I can have a genuine adventure,'" he said.

Along the way, the Hylands drove through Darjeeling in India, and they were informed of tea plantations on the mountainside near Tibet. They figured they may as well go check them out.

"It was a little track up the side of the mountain, but we had a Land Rover, so we were able to have an adventure. There were a couple of times where we had to break out the tracking devices and get the winch out because it was muddy and slippery. We were able to get ourselves to these really remote and unique destinations that your average traveller can't see," he said.

The joy that Hyland and his family felt is something he's hoping to share at the BC Overland Rally, which will be held in Whistler Olympic Park from June 27 to 30.

The rally is in its ninth year overall and its third in B.C. after starting in Washington state as a small, 120-person event. The first two years in the province were at Sasquatch Mountain Resort near Agassiz, but with hopes of attracting 1,200 adventurers, the event has outgrown that location.

"It's grown organically and that's one of the things that makes it so special. It started out as a group of travellers who were just excited about the whole concept of overlanding. They've gotten into it. They've grown into the concept as we've grown, and for us, it's really special," said Hyland, adding he regularly runs into longtime participants who gather every year to share stories.

Hyland felt the Olympic Park was an excellent fit for its close proximity to Vancouver for participants and to Whistler Village for supplies.

"The venue itself, you feel like you're out in the deep woods and wilderness. You're surrounded by trees and nature, which is gorgeous, and yet you have the infrastructure they built to handle 10,000 people a day for the Olympics," he said.

As part of the weekend, there will be instruction in everything ranging from food prep and off-road medicine to non-winching vehicle recovery and emergency preparedness.

Among the big names coming is Bob Burns, Land Rover's longtime North American Events Manager, who will design the technical course where attendees can apply what they've learned.

"He'll build this really cool off-road course in an enclosed space. They're marvels of engineering and design," he said. "We teach them best-practice techniques so they can drive their vehicle through challenging terrain with the least impact both on the vehicle and on the environment. We teach them how to minimize wheel spinning. We teach them how to use techniques like left-foot braking in an automatic to traverse steep obstacles without damaging their suspension."

Noting that the top instructors all tend to know one another and can easily convince others to come help out, Hyland explained that several who will be teaching as part of the rally also work with military and search-and-rescue organizations to help them out.

"We look for best-practice instructors, people who are recognized as leaders in the field, who have the experience and the knowhow to train at the highest ability," he said.

People of all ages and experiences are invited to come join, Hyland said, as the bulk of participants tend to be people newer to overlanding with basic setups, though there is a significant segment of retirees who decided to forgo snowbird life for something a little more exciting.

Hyland stressed that though overlanders can get themselves to remote locations, they must always stay on a road and respect their surroundings.

"You have to be very conscious of the environment in the areas where you are. The really cool thing about having about having a capable vehicle is you have the ability to go to the remote destinations that you come across as part of the bigger journey," he said.

For the weekend, single entry is $125 while family entry is $235, though day passes are available for $65. For more information, visit www.bcoverlandrally.com.