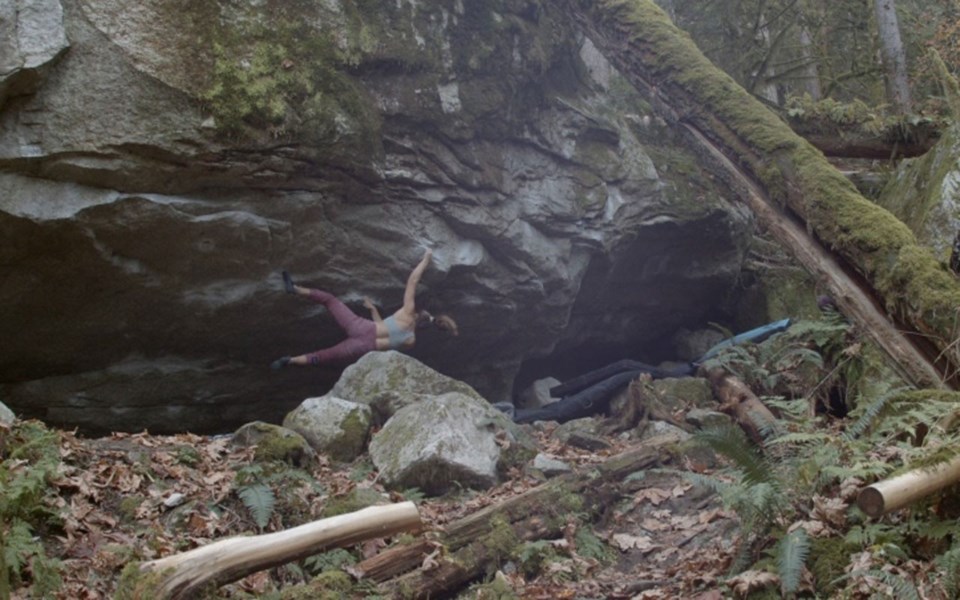 It was one of those climbs that turned into an obsession.

After coming back from a disappointing performance at last year's world championship competition, Allison Vest threw her frustration into ascending one of Squamish's toughest boulders.

"I think I was sort of the opposite of meditating. I guess I was just fuelling the frustration from the competition into it," said Vest, who will be 25 years old this month.

"I would be trying to fall asleep at night and not being able to sleep, because I'd just keep thinking of the moves and all of the various things that could go wrong."

But it was that mindset that allowed Vest to successfully climb the bouldering route known as The Terminator, making her the first Canadian woman to climb a V13 boulder.

Boulder routes—which are referred to as 'problems'—are assigned difficulty levels from V0 to V16, with higher grades indicating greater difficulty.

The journey to this major accomplishment is being celebrated later this month as part of the Vancouver International Mountain Film Festival's Best of Climbing showcase.

Vest is featured in a film called The Terminator, which is named after the route she climbed. The film debuted earlier this year during the film festival's regular viewings, but has now been selected as part of an anthology that will be available online from June 19 to 26.

The journey to ascend the route took place over a week last year, she said. It's a different world from competition climbing where you often only get to spend five minutes with a tough problem.

"The thing about competition climbing is that it's really unforgiving. And a lot of times, the boulders aren't necessarily at the max level of difficulty of what you could accomplish," said Vest.

The time pressure doesn't leave much space for the hours it can take to master an incredibly hard boulder route, she said.

However, Vest said that kind of deadline is part of the allure of competitions.

Initially, she approached the boulder by channelling her disappointments into the project.

Vest would bring her coach and give the boulder route—which is roughly 20 moves long—about three tries a day before going home.

At times, she said she'd fall off and become so frustrated it would hurt her performance.

But when she finally made it to the top of The Terminator, the pressure did not necessarily create the diamond.

On the day Vest ascended the route, her approach seemed to be unintentionally casual.

"The day I did it, I was just trying the first move sort of to warm up. So, I was like, 'Oh I'll just try the first move just to try to get everything firing,' and it ended up being that burn that I sent it," said Vest.

"I did the first move and I was like, 'Oh, I didn't feel bad, I guess I'll just keep trying,' and it was the first time on the rock of that day, and then I topped it out, and then we went home. We were in the forest for 10 minutes."

Eventually, Vest asked filmmaker Lucas Greenough, who also works as a climbing route setter, if he'd be interested in making a documentary about her endeavour.

He agreed, and as a result, they went back to the forest where Greenough started asking Vest to reconstruct parts of her climb for the movie.

"It was pretty amazing," said Greenough. "She's definitely one of the most devoted trainers I've ever seen. And then when it doesn't quite pay off in competitions like she mentions in the film, that's always a bit of a bummer, you always feel for that. So it was really exciting to see her be able to get some payoff, still in the sport but just in a different avenue."

It was also pretty amazing, he added to have the film recognized as a Best of Climbing feature this year.