Conditions heading into opening day for the Whistler Mountain Bike Park this Saturday are the best manager Brian Finestone can remember in at least five years - and only getting better as the weather remains sunny and the trails dry out.
May 14, 2010 8:38 AM By: Andrew Mitchell 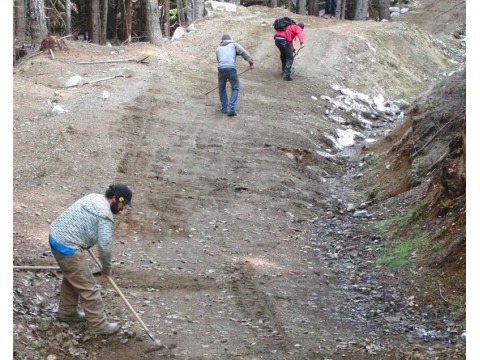 Conditions heading into opening day for the Whistler Mountain Bike Park this Saturday are the best manager Brian Finestone can remember in at least five years - and only getting better as the weather remains sunny and the trails dry out.

"It's looking really good," said Finestone on Monday. "I've been wandering around all morning and the quality out of five stars is about a four-point-five, which is probably the best quality opening I've seen in at least five years," he said. "It's just had a chance to dry out a bit better, so there won't be as much plywood over the goopier mud sections or snowbanks draining onto the trails. We've been able to get the tracks open, machines in there to harden the courses and hand crews fixing all the jump lips and things like that. A-Line will be as good as it gets."

Even a few weeks ago Finestone said he was hesitant to promise more than five trails for opening day, but now he says there will be 16 trails open on Saturday, May 15. The list of open trails includes A Line, B Line, Crank It Up, Ninja Cougar, Karate Monkey and Samurai Pizza Cat.

Both the Joyride Jump Park and 1.7 Skills Park will also be open this weekend. Finestone says both are slated for upgrades over the course of the season.

Other projects on the To Do List for the season include extending the Blue Velvet trail in the Garbanzo zone to connect with Crank It Up to create a top-to-bottom blue run for intermediate riders and building some "old school" singletrack trails into Garbanzo, similar to Angry Pirate.

"The hope is that we will be able to build a dark blue trail with some dark black options off the side that roll back into the trail, which is the ultimate in trail building because it lets you cater to multiple levels of riders with the same footprint," said Finestone.

As for the decision to fix up skills areas, Finestone says there was definitely some room for improvement.

"We want the people who haven't ridden as much downhill to come up and try the park on five-and-five (inches of travel) or six-and-six bikes, and convince them they have the skills to ride the trails."

John Cowan started work on the Boneyard and Giant Slalom course last week with the goal of making it more inclusive. The features will still be difficult but there will be things like the old "staff housing" feature that have a wider appeal than most slopestyle features.

The course has not been selected yet for the return of the Crud 2 Mud race, but more details will be announced next week at www.whistlerblackcomb.com/bike.

The Crud 2 Mud is a mixed snow and dirt event where racers start out on skis and snowboards then switch to bikes to ride to the bottom of the mountain. You can race the event solo or as part of a team of two.

The course for the Fluidride Cup downhill race on May 29 is also being decided.

"We're super excited to be hosting one of those events, they're so huge and have almost their own cult following," said Finestone. "There are a few options we're looking at. We have to mull it over and figure out what works best for the level of riders for that event and not force it into terrain where some of the riders might not be comfortable."

The Bike Park opens at 10 a.m. Saturday with the Fitzsimmons Chair turning. On Saturday evening the park is hosting an opening day celebration at the GLC featuring acoustic act Artist KO and a screening of the mountain bike movie Follow Me by Anthill Films. That will be followed by Metallica cover band Damage Inc.

The early bird rate for adult seasons passes is $459 until June 18, then it increases to $499. Passes are available at Whistler Blackcomb Guest Relations, as well as pre-registration for the Crud 2 Mud. Day tickets start at $5 on opening day.